Finding the a w-band for him may be harder than finding a dress for me!!

I actually saw this coming.

He wants a 3mm -3.5mm 18k Red Gold ring that''s not shiny and is visually interesting yet plain. A tri-metal combo could also in the running. Oh and it has to be thin as far as thickness goes. So flat rather than half-round.

You might want to check out Green Karat. It isn't exactly high end, but they have very cool designs/finishes for inspiration. We couldn't find what we wanted either and ended up having our bands made. Maybe you can acquire (returnable) rings with elements that he likes and find someone you like to combine them. I know our jeweler always offers to totally re-do anything she makes us (including my surprise e-ring if I didn't like it) so you only lose time in the long run. Good luck! The ring thing is important!

ps. Is red gold dark rose gold, or something else? Sounds cool.

pps. Maybe something from etienne perret? They do great metal colors and have some plain bands on the website.

A rose gold 3mm men''s band, not shiny but visually interesting? That he wants to try on before buying? Yikes. Good luck with that one.

If he wants as thin as 3mm, you might have to look for a woman''s band that comes in his size. In my experience searching (and I''ve done a lot...my fiance was also INCREDIBLY picky!), men''s bands are generally 5mm+. He might want to try on 3mm bands in styles he doesn''t like, and then styles he likes in widths he doesn''t to get an idea of how his ideal band might look, since finding the two together might be difficult.

Has he seen mokume? They''re a mixture of different golds and visually interesting. Maybe he could have something like this made (if he decides he doesn''t HAVE to try it on):

This ebay vendor can make mokume bands as thin as 3mm, and the star pattern (with the rose gold and shakudo) looks cool:

Haha, that sounds almost exactly like my fiance. He wants a copper-colored ring that looks a certain way (we''ll probably go with some sort of red/rose gold band), but doesn''t want to actually have to shop for it (however, he wants to be able to look at it before buying it).

He initially wanted mokume gane, but it''s a bit pricey for us -- http://www.krikawa.com has a tri-gold ring that''s really pretty (can''t link directly to the ring because it looks like the site''s down right now).

If you''re looking for red gold bands, here are some links I found:

FI was also very very picky about his band. We ended up deciding to have Quest custom design it. Fortunately, he got over his thing about having to see something in person first -- otherwise custom really wouldn''t work for him!

Glad to hear it's not just my guy! Those links are great, Thanks!

Mokume is a bit pricey for us too. But I love the Green Karat Link! I'm into socially responsible jewelry, so enviromentally responsible weddings bands would be a great thing for us.

ETA: I showed hin the Green Karat rings and didn't get a huge response. I think they may be backup. We saw a twisted tri-metal ring and he thought it was interesting how it'd look different everytime he looked down. Maybe Mokume might work after all? .... And he gives me a hard time about looking for a dress!

That's what he finally ended up with, a mokume ring. But they are impossible to find thin. We wanted matching bands, his 8mm and mine 3-4mm. I couldn't find one thinner than 4mm and the design/colours didn't show up too well on one that thin. We also looked at a cute online place that does a lot of different colours of gold. Very interesting stuff to look at even if it's not up his alley (www.aris-titanium.com).

I forgot to say. Finding Mokume that was less expensive is part of what took us so long. Once he found it, he knew that was want he wanted, but didn't want to pay the $1,500 plus for it. He found a website that offers it and damascus at descent prices. He ended up with his perfect ring at half the price of other mokume/damascus places...the process is just so expensive still though!!

Ooh, that woven ring is pretty. Maybe check out Sundance for inspiration? I think the idea of finding a not-too-femm woman''s band is probably your best bet. Why does is have to be so small, does he wear gloves a lot? Or is he just not a jewelery person?

Oooh, that is nice. I found a two-color ring I know he''d love if it was only 3mm not 5. I''m wondering if I can talk him into having a ring custom made?

My DH started off wanting a 3mm band too ... at least that''s what he *thought* he wanted ... UNTIL he was teased mercilessly in every jewelry store we went to & until he actually SAW what that looked like on his hand and then his "ideal" edged its way on up to 4mm.

Just like with e-rings ... what we *think* we want can vary ENORMOUSLY to what we actually fall in love with on our hands. This "ideal band" exists only in his head right now, as its so difficult to find ...

''Fraid you wouldn''t win that one, Deco! He wants a 3mm Rose Gold band because he fell in love with it on his hand. We went to a store in Portland with a thin flat 18k ''Red'' gold band with interesting texture and he thought it looked great! (which it did) He tried on the wider stuff and hated it.
We went to another store and the only narrow band they had was a thin tri-metal twisted band w/o rails which he really liked! But he wants to keep looking at the choices so he can make a proper decision. It didn''t help that the owner focused on hard-selling a band to me that didn''t suit me. That really turned us off the store.
I want something clean and simple, with a bit of sparkly and some sapphires. He told me a channel set band was too modern for my e-ring. (He also didn''t belive me when I said my ring was channel-set.) He wanted to sell us something too fussy for me that wasn''t comfortable at all and waaay too delicate to boot! I''ve emailed SP.com and asked if they could make their channel-set baggutte diamond ring with alternating sapphires.
************************
Don't Worry, Be Happy!

this one is pretty and it''s 3mm wide, but i think i like it more for you than for him. 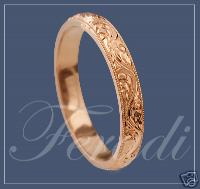 this one is definitely simple, yet "visually interesting" with the florentine finish. it''s from goldspeed.com. 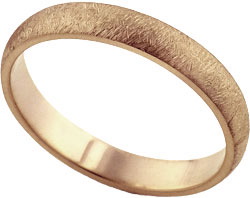 oops. those are pink gold not red gold. ignore them. sorry.