I think these pearls are amazing [even though I have only seen pics!]. I would love to do something [probably contemporary] with them in yellow gold and diamonds. They remind me of my mom''s black opals.

Does anybody own any or know anything about them? 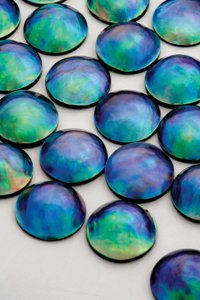 I thing this necklace is pretty cool too. 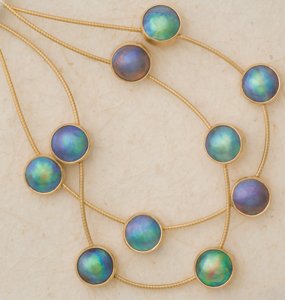 Eyris pearls are abalone mabe pearls grown in New Zealand by a guy named Roger Beattie. He was not the first to cultured in the native Paua shell, but he is the first one to be succesful commercially.

The pearls are mabe, not whole round. The color you see is the same color as the inside of the shell. A small, half bead is inserted under the lip or mantle of the abalone and attached to the shell with glue. The pearl is harvested but cutting it from the shell.

The pearls are pretty expensive, especially considering they are not whole pearls. They are sold through the Imperial Deltah Company in the US, and direct by Roger to dealers in Europe and in New Zealand.

I''d love to get my mitts on one just to have as a toy!

I don''t know much about pricing but I have seen them in person at the Las Vegas jewelry show and spoken to Roger Beattie (or is it Roger Beatie, I am not sure) and the folks from Imperial about them.

The colors really are as they appear in the photos. The Paua Paua shell (according to Roger) is the most colorful of all the abalone shells. The California Green Abalone does not have the same iridescent coloration as the Paua. Roger grades each pearl according to color, luster, and the lack of conchioline striations in the mabe pearls. He has a lot of grading names for each, I do not remember all of them however, but there are four different color groups and about six or seven different quality grades. If I could find my notes I would list them, but it has been a few years. I do remember that the name Eyris comes from the iris of the human eye, and most of his pearls are cultured in Akaroa, New Zealand. The largest pearl he has produced is one he wears personally on his lapel. He calls it Google world or Google earth, and I think it is slightly more than 20 mm. But the average large pearls he produces are in the 18 mm range.

I've read about them and boy are they gorgeous AND pricey. It's a pity they aren't fully round either.
Sometimes the mind ignores what is logical because the person cannot accept the reality of what it is.

Hey guys! Just using internet cafe time to chime in, but I got to see the Eyris pearls a few days ago at a local jewelry shop in Queenstown NZ. They DO look like how they look in photos - and are really really beautiful and the colors are very vibrant. I so wanted to buy one but unfortunately this trip itself is already over budget, and those pearls are gorgeous but EXPENSIVE! Maybe another time...

So beautiful. I would love to own some!