In the Wedding stuff on my pet contest!! He loves my veil so much that I just had to enter him wearing it, even though little boy doggies aren''t really supposed to wear veils. FI was rolling his eyes the entire time I was taking pictures.

Haha, I''m really excited about this. 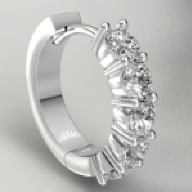 Too cute! Let us know when to vote!

Blenheim, I had no idea that was you! Hehheh, I'm Miss Kiwi!

Oh that face! Such a super cutie pie!
The first fondle is free. (Posted just for you Monnie!)

Heehee, I changed my avatar.

Amberwaves, I didn''t realize you were Miss Kiwi! There are more Pricescopers there than I realized!

Oops, that was me. I''ve never had that happen before. When I went to change my avatar I realized that the email address they have is pretty outdated and I changed that as well, and I think that screwed it up for a moment.

Blen, yeah, that''s me! Dylan is the cutest thing ever. I wish Woofie would sit still for me to put something on him, but alas, he hates me.

I wish I had a veil.

It was hard to get him to sit still, because he wanted to cuddle with the veil instead of wear it. I bribed him with treats.

Once he realized that he got doggie biscuits for sitting still, he became very good at it.

And actually, that''s not my real veil. (shh, don''t tell!) My real one is with my dress down in Virginia. I got a little jealous when Robbie was talking about wearing hers around the house and so I went to Michaels and got the stuff to make one, for pretty cheap. Now I have it for those times when I want to wear a veil while, say, looking at weddingbee, and I can also wear it to my bachelorette party if I end up having one. The good thing is at I don''t care too much if Dylan tries to cuddle with it. 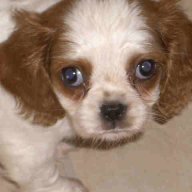 That is very cute! Good thing I don''t have a veil yet,or else I''d dress up Anabelle!! (my cavalier!) 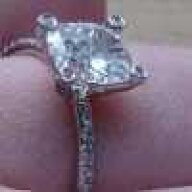 Hehehehe Blen, I saw those earlier and thought he was totally the cutest one!!!

Dylan is so cute! I can''t believe your FI let you "bridal" him out like that--my DH would never have heard of it, lol! Love, love love the pics!
Pronouns: she/her