I love an east-west setting and have not been able to stop thinking about this .55 carat duchess cut via xothebijoubox on IG: http://instagr.am/p/B4yix-Jlusy/
However, I've never seen a duchess cut in person person, and I was able to find limited information about them online. I did find a post here that was helpful:

The Royal Cuts, developed in Israel and distributed in the United States by Suberi Brothers, New York, include the Empress, the Baroness and the Duchess cuts that resemble the pear, oval and marquise shapes respectively.The difference is, these cuts create the illusion of a much larger diamond, achieved through state-of-the-art cutting technology that enlarges the crown, or top half of the stone, and reduces the pavilion, using four to six extra facets over the traditional 58. A duchess cut diamond has much more brilliance than a regular cut diamond. It has more faceted cuts that catch light rays from every angle and reflects it back.
Click to expand...

I'm looking for any information about a Duchess cut marquise diamond I have. It is .75 carat and set in 14k white gold. I do not know the color or clarity, but it appears to be very clean and I would guess fall in the I-J color range. Any info regarding the special cut of the diamond, the value...
www.pricescope.com

I wasn't able to learn much more than that, but I'd like to! Does anyone know where I can read up on these? Have you ever seen one? What do you think? 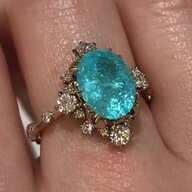 I have two of these... one set in a necklace and the other is with CVB unset. What I have learnt of these is from the same sources you have mentioned.

What I can say about them is that they face up well for their carat size, and are a unique and pretty shape!

I have a duchess cut in a halo and I liken it to a rose cut diamond. It's very shallow with large flashes of light. Faces up very large for carat weight. I love mine!
B

Thank you both so much! The comparison to a rose cut really helps. It's a tough call for me between that and a marquise!
E

I have a pair of empress cuts, which were cut by the same company. I've never done anything with them. They are very spready for their weight. There really isn't much out there about the line, and they only pop up occasionally. I don't think they ever were very popular.

I think they are super cool cuts. I like some of the more unusual step cuts, so I find these really intriguing.
B

lovedogs said:
I think they are super cool cuts. I like some of the more unusual step cuts, so I find these really intriguing.
Click to expand...

I didn't realize they were step cuts, but now that you mention it, I see it! 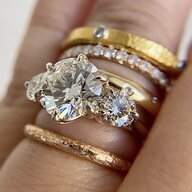