Does this sound ok? EGL cert?

What an excellent site this is, tonnes of information!

I have ordered the following diamond and I wonder if any of you could give me an opinion on it. I ordered the diamond after realising I could get a better deal on the net, but now after reading about EGL Internationl certs, I am really worried about the reliability of the cert. I have looked up their website (http://www.egl-labs.com/check_cert.htm ) and the information on the online cert is exactly the same. I am having the diamond set in a knife egde platinum setting and the seller offers a full refund if appraisal does not back up the cert to within a grade, so I intend to have it appraised as soon as I receive the ring. I am in the UK and compared to UK prices, we got an excellent deal on this stone which apparently is being sent over from New York to be set.

Any opinions/help/advice would be much appreciated since I am worried about the whole EGL International reputation.

What I noticed right away is, this stone is really too deep, it''s facing up much smaller than it should. I wouldn''t go past about 62 in depth, and only then if it''s not affecting the face up size much...

I think you can do better. 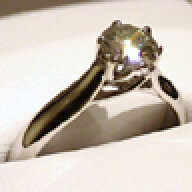 Using the "Cut Adviser" tool under the "Tools" menu at the top of your page will help you get an idea of the performance of the stone. You''re looking for a score below 2 (this indicates a candidate for great visual performance). Plugging in the figures from you cert generates a score of 5.1 which is probably not what you''re looking for.

Also as Ellen mentioned the stone is quite deep, meaning that the 0.95ct diamond will appear to be the same size as an ideally-cut 0.90 while you''re still paying for 0.95. ( based a "Search by Cut" from the "Prices" menu at the top of the page )

Finally, with the EGL cert and grading, you''re saying that the vendor guarantees that it will grade to within one grade, but does that mean one clarity grade AND one color grade is ok? If so, you''re paying for D VS2 when it could in fact be E SI1. The difference in price between these two being roughly US$1500 ( based a "Search by Cut" from the "Prices" menu at the top of the page ).

Hope that helps somewhat, I''m not trying to be mean.

The members on here are great at helping people find a stone to match their criteria if you''d like to go that route. 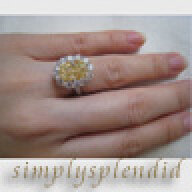 The cut is too deep and yet under the comments it says "Tolkowsky Ideal Cut". Seems that the EGL certs are indeed not as credible as the other labs. I''ve seen other posters mention that EGL USA is ok but not others - this one says its EGL European. I wonder what makes them put in the comment that it is an ideal cut, do they just put it in at the request of whoever to sends the stone in?

Hi Skinny. The numbering of the EGL report (starting with a "2") indicates that it is an EGL-Israel report.

I grade consistent with GIA Gem Trade Laboratory standards, and have never found an EGL-Israel report that I agreed with. Sometimes my clarity grade would be in agreement with theirs, but never on the color. I have found their color grading to usually be 2 grades higher than I would grade, sometimes 3 grades.

The good news is that usually diamonds with EGL-Israel reports are priced accordingly. The market discount is greater on stones with these reports, so they usually end up being worth exactly what you pay for them. If you are aware of this and like the stone, there's no problem to it.

Knowledgeable vendors will usually communicate this upfront with you, but many jewelers are often uninformed in this respect, not knowing how to recognize an EGL-Israel report nor knowing that the grading is often "softer" than the more reliable EGL-USA labs and to a lesser extent (in my opinion) the EGL-Europe labs.

If you like the look of the diamond upon receiving it, have it independently appraised to get a second opinion on the grading and whether you paid a fair price. You also could consider getting a report from the GAGB Laboratory (Gemmological Association of Great Britain), which has a reputation for accurate grading. Once you have accurate grading, it's fairly easy to establish whether you paid a fair price (just by searching the Pricescope engine if nothing else).

If indeed you did pay a fair price, are satisfied with the grading and like the stone, then congratulations on your diamond purchase.
Rich, non-Independent GG Appraiser
Sarasota Gemological Laboratory