I have a question regarding mounting. The good news is that I have found a diamond after lots of reading on this website and searching the online vendors (Thanks Pricescope!).

The "challenging" thing now is getting it mounted in a ring (Princess cut 5.65x5.65). After much searching the ring she likes the best is at Jared''s Jewelry. They tell me it will cost $390 to mount the diamond in the platinum setting! The setting is $2200 to begin with and the head is built into the ring (not stuck on). Is this a reasonable charge for mounting? Does anyone have any other suggestions?

(By the way, Jared''s bothers me in more than one way. They will offer you 12 months same-as-cash financing, but will not offer you a discount if you pay cash upfront. I know the financing is included in the price of the ring, so why won''t they offer a cash discount?!)

They could be doing what we do.

We sell our contracts to a finance company, they pay us our full amount up front and bet on the consumer going over the time frame. I have been told that over 85% go beyond the no interest time frame.
R

Hmmm... interesting on the financing. I would still think that it would be sold at a percentage discount since money NOW is always worth more than money later.

Regarding the setting, I have also looked at many places online and locally for it. It is similar to the picture below of the Christopher Designs setting. However, next to the center stone it has ovals, baguettes, and then small rounds. The head is also formed into the ring. (I would post the actual picture, but it might be kinda tacky to walk into Jared's and snap a photo of it!)

Anyone have an idea of who manufactures a setting like I described and is similar to below? 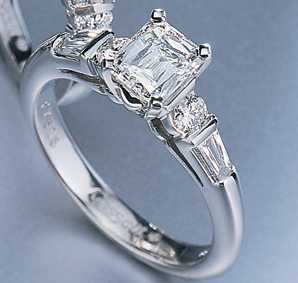 Okay, Jared says they can do the mounting in white gold for $190. Is there a problem with mixing white gold and platinum?

Also, has anyone had experience with custom made jewelery? Are there things to watch for when doing this?
F

In my experience, most places will set the stone for free if you are buying the setting from them.
P

My fiance bought a diamond one place and then took it to my favorite jeweler where he bought a simple 2mm 4-prong platinum setting for the diamond. They mounted the diamond in the setting for $20. So, I am surprised that they are charging you so much for the mounting. I'm wondering if it is harder or more time-consuming to set the diamond in a setting with side diamonds, and that is why it costs more? I'll be interested to see what the experts say.