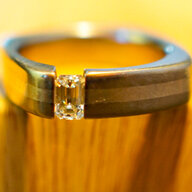 While I'm not quite ready yet to buy the stone I want for my wedding ring, I'm enjoying the process of searching for it through the PS tool and others (specifically like those that allow searching on L/W ratio). It's pretty obvious on the PS search tool where virtual inventory is being listed, as the same exact stone will pop up for several vendors, sometimes with widely varying prices. One vendor in particular seems to consistently run 10 or more percent below the others, presumably they make this up through some combination of higher volume and lesser service. I currently have two "virtual" stones that I'm pretty interested in, and I'm wondering how, once I have a third picked out and couple more bucks in savings, I'd go about comparing them. I'm looking at emerald cuts, so there really needs to be an eyeball evaluation rather than simple number crunching. Is it possible to have vendors ship 3 such stones to a local GIA-certified gemologist for me to pick from? Or would I be stuck picking the most expensive vendor on the basis that they're the only ones who would call all three stones in and give me pictures and/or have them evaluated by an in-house gemologist?

Even though you haven't been answered yet...I wonder if the answer isn't easy. But...I don't have it.

If you'd said...identify one that's promising, and do as you say, I don't think there's any doubt that you have the system down. Your desire for 3 seems reasonable, if not formulaic, though...then again...the number might have been 7 or more from the point of view of optimizing.

I hope someone else will reply.

Otherwise, it would seem a B&M might generally try to do the sort of thing you mention natively, have you look at 3 of theirs, and go forward. But, searching virtually, with your using them as a "pass through" agent (which they may not represent themselves as anything else), you might simply do the following:

If 3 or more vendors, pick the guy in the middle you'd prefer not to use as a first choice, but could, tell them your thinking, and fish for how they typically do it, propose your idea here, or a version close to it, based on their feedback, and tell them you'll get back to them. Then, based on what you've worked out, propose the same logic for your favored, less expensive vendor.

Unless, of course, you DO want to engage the particular expertise of one of the named vendors. For that, of course, you're leaving the commodity nature of the bargain, and should expect to pay a premium for that.


Ira Z.
If you're looking for diamond shopping tips...this (along with this update) might do the trick!