I had a diamond that was appraised by an independent gemologist as a "J" ~ I sold the ring, the new buyer had it appraised, and their appraiser graded it as a P !!! (Obviously, buyer is unhappy with that)

I''ve looked all over & can''t find any true color charts.

To me, "J" would indicate a yellow tint, P would be of champagne/brown color, the diamond is really neither.

Further pertinent info., under 10x the diamond is actually very white in it''s clear spots, but it has many teeny tiny inclusions that, with the unaided eye, give the diamond an overall slight color. Without a loupe, the diamond is extremely clean - except for the slight "color/tint".

Can anyone please help?! A color chart which actually shows color or other opinions would be appreciated.

Thank you so much on this one!
Tara
Tara

I am afraid the an internet color chart would not help you very much in grading your "real" diamond.

I think the real problem here is one or both of the appraisers were wrong in the color grading of your diamond. But I would tend to believe the appraiser that had a GIA graded master diamond color set. Not the CZ sets that are sold on the market to want-to-be diamond graders. Also not a set that the grader made up himself. These sets are expensive and hard to get but they are invaluable. Also most sets do not contain a "P" color master.
I once had a customer that took his "G" color, GIA graded diamond to an appraiser who graded it an "M" color. These blind, fly-by-night, appraisers should not be allowed to do appraisal work but anybody can hang out a sign that says "Jewelry Appraisals Done Here". There should be a law but there is not.
We tell people here on the internet to take their diamond to an independent appraiser to have it checked out and they run into these untrained charlatans. I wish I could help you.
Becoming a professional appraiser takes many hours of studying appraisal science. Becoming a professional jewelry appraiser requires becoming a graduate gemologist and appraisal science. It also requires retesting on a yearly basis. All of this cost money, time and a whole lot of learning. There is more to it than that but I will get off my soap box.
Good Luck in finding a professional independent appraiser.
dimonbob, GG
whiteflash.com
T

I SO appreciate your response. Many thank yous!!!!!!
Tara

It sounds like the many pinpoints are dark and effect the apparent color of the stone.

Maybe one of the pros here can explain the proper way to grade a stone that has so many visible inclusions.
T

I am just really amazed to find out that master sets don't even include P color stones! So I'm thinking then where did he get it from? And the story about the GIA graded stone being appraised as an M, that's just ridiculous!

I'm not saying I'm in agreement with the J grade either, but a written appraisal from a graduate gemologist is worth well more than my opinion, so it's what I went with. And trying to get the buyer to understand that they're all just opinions, I'm not sure she belives me! Anyway, I've given her a link to this thread, and we're trying to resolve it.
Maybe we should send it to Rich!
Tara

Tara, you could put together a full D-Z masterstone set if you wanted to, but doing so is prohibitively expensive for anyone except a professional lab.

Did your buyer just walk into the nearest jewelry store to get it appraised, or did she actually find a true independent appraiser? Because if it was the former, this sounds like yet another "Oh you got ripped off, return this diamond and buy one of ours" situations. It's unfortunately not an uncommmon occurrence.
T

That's what I thought. She claims she took it to an independant gemologist. Yet she also mentioned that she took it to him for him to size it - which made me think "jeweler".
Tara 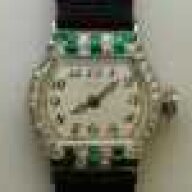 This is why I added a N (Kaplan of course!) to one of our AGS Master 5 stone sets. Every once in a while it does come in handy. Big difference though between a J and a P! First question when askig for appraisal qualifications should be what they are using for color grading and how many stones they have and if they were accepted by the Gia and/or AGS. I can't tell you how many times I have seen people using stones from inventory to grade.....yipes! Cindy
Cindy Konney, Master Gemologist Appraiser, ASA, GG, RJ, ICGA New England Gem Lab, ICGA, AGS-Independent Appraiser
T

To tell you the truth, even when watching my own items being appraised, I've never seen an appraiser take out a set of stones to compare! Yikes is right! I'm so glad this forum is here to help educate the public!

As of now, we're trying to speak with the original appraiser.
Tara

Wow! Huge difference between a "J" and a "P" color! Someone's way off base.

Check out the qualifications of the appraisers, and offer to send the stone to an unbiased third party. If you really want to settle the argument, have it sent to GIA.

You might also consider sending it to Marty Haske, or another appraiser with the SAS-2000. That will clinch it.
Rich, non-Independent GG Appraiser
Sarasota Gemological Laboratory
T

Richard, being you are an appraiser & who's opinion I value, can you tell me what you think? The stone has no yellow or brown color. Overall, it has a slight grayish tint which is caused by all of these so so tiny carbon spots. What would a "P" diamond look like?
Tara
T

I don't know if this will help because my pictures weren't great, but here's a link to the ebay ad. (And she paid a few hundred dollars less than the price shown). P??? 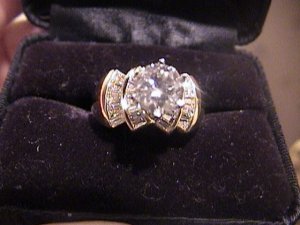 It depends on whether the stone is in the gray, brown or yellow series.

A "P" color brown or yellow series stone shows a LOT of color. Excuse the language, but dealers refer to yellow series "P" color stones as "piss yellow". It's not something you'd easily miss with the naked eye.

In the gray series, the color doesn't show up as pronounced, but has a dusky, grayish-silver look to it. These stones are foolers, and throw off a lot of people not familiar with that hue.

Difficult situation. The guy saying "P" could be speaking from a sour grapes position. Or, he could know what he's doing and calling a spade a spade.

On the flip side, it's hard to imagine a gemologist with any substance calling a "P" color stone a "J", no matter what the color series.

Then again, both of them could be looney toons. In my opinion, you've got to elevate the situation out of it's current position to one of high credibility. That's why I recommended GIA, or another "unquestionable" source.

Then again, you could always send it to me. I'd give my opinion no charge just for the fun of checking it out. Usually when people see my appraisals they tend to have confidence in the grading.
Rich, non-Independent GG Appraiser
Sarasota Gemological Laboratory
T

Thank you. I will suggest it to her. Is your co. info on Pricescope? Or can you email me the address? [email protected]

PS- There's no yellow to it at all, & I would say it fits into your "gray" catagory - viewing it normally, no loupe.
Tara

I just saw the picture. It's tough to tell, but my gut instinct is that it's lower than a "J".

My email address is [email protected], and company info is on the pricescope list of appraisers. If you're buyer is interested I'll email or fax them my bio and references sheet.

One thing- If they like the ring, but are unhappy with the appraisal, you might still be able to save the sale with a discount (if it appraises less than a J).
Rich, non-Independent GG Appraiser
Sarasota Gemological Laboratory
T

Finally got the ring back! Buyer had it appraised by Anton Nash - who I know is listed w/Price scope. It was appraised as a 1.32ct H I2 (good cut). So even thought there are no visible inclusions to the naked eye, it still has the tint & is an "odd" diamond! I'll go by this appraisal & thank you for your offer!
For some reason though, there is no value stated, can you help with that?