You can see the ring below and here is the story:

ENGAGEMENT STORY:
We had planned to go to Orlando for Spring break and have a Disney good time. We had set aside one day to travel to Melbourne beach, just South of Cocoa Beach. I called a hotel there and made reservations to stay the night, but didn''t tell Michelle. She had an idea that I wanted to propose, but she did not know when and thought it would be later. We arrived in Melbourne and I mentioned that it would be great if stayed at a hotel and saw the sunrise. She told me that we were trying to save money, so only if I got a great deal. I promised to bargain hard. She went to the beach by the hotel and I went and checked-in to the hotel. The weather was beautiful that afternoon, so we laid out on the beach in front of the hotel. It reminded us of that first day on the beach together in Brazil. Then the weather turned for the worse and started raining that evening. I thought my plan was in trouble, because I had wanted to propose on the beach at night. We went to dinner and just before we left I slipped the ring, some sea shells, and a poem I had written into my pocket. I was unsure of what to do. We went to dinner at a romantic Italian restaurant.

Except for the weather, everything was going well. When we returned to the hotel, the rain had stopped, and I asked her if we could walk on the beach before retiring to the room. So we went down on the beach and she had her back against my chest as I hugged her and we watched the waves. I told her I had a present for her. I took out the seashells and slipped the poem inside. She kissed me on the cheek and opened the seashell. She tried to read the poem, but it was dark, so I read it for her. Half-way down the poem as I got to the words bride and wife, I started to choke up. Apparently she was crying, but I could hardly hear her over my own cries. After I finished reading the poem, she turned around. I got down on one knee and asked her to marry me. She said, "yes, yes, yes, I will love you for the rest of my life," and I stood up and hugged her. I was still in a bit of shock (shock that she''d actually said yes) so I asked her if she really said yes and she screamed, "yes, I want to marry Tom."

We up to the room where I had ordered champagne and strawberries and spent the evening cuddling and smiling while watching the surf crash on the beach.

I bought the ring through Bill Pearlman who was great!!! You can hear about my shopping experience at: 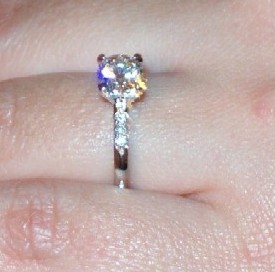 Congratulations, you did well
As a fellow poet I can tell
What a sweet and caring guy are you
May the romance last your whole life through.

Hold on to that poem
as the years come and go
I still have mine from long, long ago! 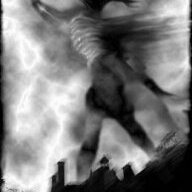 On a side note, what Italian restaurant did you eat at? I've stayed in the Melbourne/Cocoa/Satellite Beach area several times, and was curious.

Have you ever tried The Mango Tree? The food is excellent, and the service is truly top-notch. If I recall correctly, it is located in Cocoa Beach, just off (on?) the main street.

Great story. I am a hopeless romantic. Congratulations.
Lanee []