Battle of the chunky cushion diamonds

I'll lead off with the important part: Which of these would you prefer in a halo e-ring?

Or here's the one I already had my eye on, and this is the setting style I'd be after:
http://rockdiamond.com/index.php/je...ight-yellow-vvs2-old-mine-brilliant-gia-r3953


I would have put this in my other "searching for..." thread, but I figured this specific topic might help someone in the future, as I didn't turn up much in the way of chunky cushion cut yellow diamonds in a search.

So, I haven't seen any in person, but the more I stare at photos and videos of the old mine "chunky" cut cushions, the more I like them. In a colored stone, they do seem to cause a more noticeable zoning effect. But I'm told that a photo will "freeze" that particular color concentration, whereas it's better and more dynamic in person (i.e., in motion). Can anyone here speak with experience viewing and comparing the older style cushion cuts in colored diamonds?

My concern in the first one is mainly the fluorescence. David captured a great photo a ways down on the page that shows the "worst case scenario" of color and clarity on that stone. Certainly it will look fantastic in most lighting once set. It's so hard to judge color in these natural yellow and fancy light yellow stones in photos. The GOG stone indeed looks pretty faint. So what do you guys think? Stick with that set stone from DBL or what? 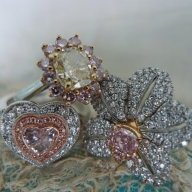 I love the stone already set in the DBL halo. If you were interested in the other DBL stone, I would contact David and ask if the blue flourescence affects that diamond. I personally would not go with the GOG stone. It was not cut to maximize color as Yoram stated in an earlier thread on Rocky Talky, and if I wanted to Halo a yellow diamond- I want it to look yellow! I love the uber settings that DBL is doing and that setting really maximizes the color.
"Gems are the flowers of the mineral kingdom and the fancy colored diamond is the orchid." R.J. Hauy 1817 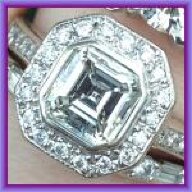 I would also go with the DBL stone since his are cut for color. I'll be visiting David soon I hope and I can't wait to see these bad boys in person!
mmmm...diamonds.....
Associate/Hand Model at:
http://www.diamondsbylauren.com/index.php

Yeah I guess I was about 2 weeks too late, as I ended up happening upon the epic "precision cuts" thread (where these specific diamonds are discussed) a few minutes after posting this, naturally. The summary, as I gathered it, was that they're both unique cuts, designed with art, science, and history in mind, and that each cut has a different goal, which the respective stone achieves impressively. The DBL stone seems cut to resemble an historic cut, and to maximize color retention. The AVC appears to be designed to reflect a lot of broad flashes of light in a specific aesthetic pattern. As DiaGem, who has a special familiarity with both stones, says,

Those two examples are actually opposites as far as objectives. One wishes it was a Lighter shade closer to colorless and the other wishes it was darker into Fancy territory.
Click to expand...

At first, I thought, "color is color." The grading lab assesses the hue and saturation of the diamond material (through the pavilion, i understand) and gives it a name. Sure, there's a subjective range, but if both stones are natural Y-Z, then other optical properties notwithstanding, these diamonds should be pretty close to the same color. But I now realize that the AVC reflects so much ambient (white) light in blinding flashes that it probably defeats my eyes' attempts to perceive the "yellowness" to any significant degree.

So one really isn't "better" than the other. They are both pretty good at doing what they were made for, and the choice comes down to personal preference and personal objective.

Personally, the AVC in this case seems to be an experiment that failed. Perhaps they hoped it would show more yellow. Because the "optics" objective was more successful than the "color" goal, I can only presume that they ended up with a diamond that colored stone fans don't want because it's too light, and that colorless buyers might not want because it's too yellow. That theory seems supported by its price; it's near the bottom of stones in its size range (1.0-1.2ct), the same price per carat as a comparable L color VS1 AVC.

I do, of course, wonder if the AVC cut pattern (or similar) can be applied successfully to yellow rough such that you get the best of both worlds, but it just seems unlikely to be financially feasible. If he's starting with dark yellow rough, he's probably better off aiming for the DBL branded cut (or some "generic" radiant or cushion cut) that will grade Fancy Intense Yellow, rather than hoping for a lighter shade with the sparkle of the AVC. I guess that's the challenge of the enterprising cutter.

Oh, and I did discuss the "strong blue" with David. He seems to think the photos are pretty accurate (i.e, the blue does lighten it in "worst case" UV), but that the GIA is probably also harder on the color rating than they would have been with less fluorescence. So it probably looks really good in most lighting scenarios. Certainly something to consider.

Me? I love the wonderful light return pattern of the AVC, but I want a decidedly yellow stone. I'm tempted to buy both to compare side-by-side just for the forum, but I think I know which one I'm going to choose. You'll have to keep an eye out for a "showing off the bling" follow up in the coming weeks (if she says 'yes' of course). 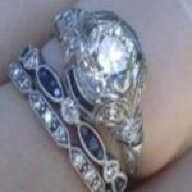 I would go with the DBL stone that is already set in the halo. I think it is lovely and very feminie. That would be my top choice.
"The best things in life are free. The second best are very expensive."- CoCo Chanel
"I never worry about diets. The only carrots that interest me are the number you get in a diamond!" - Mae West

I would pick the AVC! it is gorgeous and is the largest of the three. Plus I like squarer stones. I think the color will really change depending on how you set it...if you want to emphasize the yellow maybe go with a yellow gold 'cup' ? or you could do what Haven's jeweler did and put a yellow diamond underneath the setting (I am not sure how much this influenced the color but I think it is cool)
slg47

They are LOVELY and it really does emphasize color. Don't get me wrong though, they are cut very well too.

You are getting a better deal on these stones since they aren't graded fancy, even though (IMO) they would be considered fancy if GIA wasn't such buttheads. Yeah I said it... GIA are buttheads sometimes.

The uber ring you listed is definitely my choice of the three. It's already made and well knowing DBL and their quality, you will not be disappointed.
The only difference between bravery and stupidity is the outcome 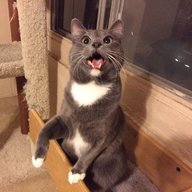 Does the same cutter do the AVC and the DBL cushions?

yes
"Gems are the flowers of the mineral kingdom and the fancy colored diamond is the orchid." R.J. Hauy 1817
You must log in or register to reply here.
Be a part of the community Get 3 HCA Results
Jewelry Blog