I posted a request for help with a princess cut stone yesterday---no responses. Things seem a lot busier this morning and I though I'd try again---

DOES ANYONE HAVE AN OPINION FOR ME ON THIS DIAMOND???

Thanks for your help!

Accurately grading a princess cut based by the
numbers alone is a very unreliable method of
establishing the quality of your stone...

For example, you may have two princess cut diamonds with very similar measurement, but still look very different.

Tools like the brilliance scope or the ideal scope can be a helpful aid.

But in my opinion have your stone checked out by an expert like the Rock Doc or Dave Atlas just to make sure.

Some of your problems with getting less than loads of help here on Pricescope with your diamond is that the parameters of princess cuts aren't quite as set in stone (so to speak) as round brilliants (the bulk of the diamonds discussed), so not as many people are going to be very familiar with them. I'm no expert of princess cuts either, but I can give you some info.

site. The AGA is one of the few respected organizations that have attempted to grade cut quality on fancies, and from what everybody seems to say, their standards are quite reliable.

Having pointed that out, the diamond you are looking at seems to be of better than average cut, but certainly not a premium stone. Most of the specs fall outside of the "ideal" classes, but that doesn't necessarily mean that it isn't a beautiful stone. According to the AGA standards, the table seems quite a bit larger than is typically desirable and the crown is a bit shallow, but the overall proportions aren't totally unreasonable.

Without having done a lot of research on pricing it's hard for me to say what the price should be for such a stone, but the price you listed certainly seems in the ballpark. I suspect that better values are probably out there if you search for them, but it seems to be a fair price. I would second Kirk's recommendation to have the diamond checked out by a professional before committing, as these types of diamonds can be a tricky purchase.

Hope this helps in some small way. Maybe some of the seasoned pros here can help fish me out of the deep end on this one.

THANK YOU BOTH FOR YOUR INPUT! I really appreciate it!

Jenn, the princess cut is probably an AGA 3A Cut Class stone, possibly 2B. If it is correctly graded, the price is right about where it ought to be.

I've attached two DiamondCalc simulated images to give you a rough idea of the major points on the diamond. One is an photoreal image of the stone under "jewelry store" lights. The other is a simulated IdealScope image.

Disclaimer- The facet arrangement and symmetry of the image will probably vary from your actual diamond, which may affect the light performance indicated. The computer simulation is reproduced best when the actual diamond is being viewed and the image "tweaked" to the appearance of the diamond. However, this "blind" reproduction should be fairly close on the major points.

One thing I'd like to point out is that the numbers don't seem to add up on this stone. With the numbers portrayed, it should have a much thicker girdle, or possibly higher crown/deeper pavilion combination. They've also used the longer width measurement in determining total depth, when they should have used the shorter measurement ( which gives a total depth of 76.0% versus 72.1%).

I'd definitely have the grade and numbers confirmed by an independent gemologist, particularly with the stone being an SI2 clarity. You want to make sure it isn't an I1, because there is a significant price drop between SI2 and I1. 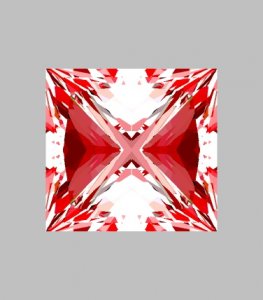 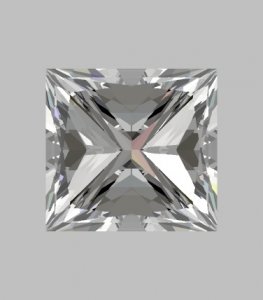 Charts and the Computer generated images assume that all four quadrants of a princess cut are equal. This HARDLY occurs due to the nature of the rough and the graining of the stone. So unless the stone is absolutely equal it will NOT appear like the computer generated graphics say it will. The computer graphics and charts are a strong assumption to make without knowing the facts - or just a portion of them.

In order to properly analyze and photograph the real images - the diamond needs to be seen. There is simply no short cut for this.

You need this information in order to get a correct and accurate analysis of the stone.

A simple thing like the culet being off center can result in the pavilion of the stone being seriously lopside, which does affect its brilliance, and appearance.

Get ALL the facet angles. Then, and only then will you get correct and accurate information. If the software is able to input the varied angles then you'll get an accurate generated graphic.

As always, the Doc is correct and exacting. That's why the disclaimer is included with the images.

The images are meant to give a broad idea on the major points of the stone, and not an end-all in themselves. The diamond should always be viewed firsthand and shown to a professional for final decision making.

I do feel however, that the computer generated IdealScope images are helpful. They usually fall in the right "neighborhood" of how the diamond performs. Much better than nothing when trying to weed out poor performers while doing internet shopping.
Rich, non-Independent GG Appraiser
Sarasota Gemological Laboratory

I once looked at a princess cut stone that had about the same preportions as yours does. I wasn't happy with the way it looked. It didn't sparkle like I wanted it to. For another $1600 dollars you could get a lot better diamond. Plus, it's almost the same size as yours. Check it out on ebay and its product number is 2609760069.

Fancies tend to leak a fair amount more than rounds. It's just a fact of life. What they lose in brilliance, the fancy lover makes up for in elegance of shape.

There is a new breed of fancies coming out on the market though. Ones with light return performance as a cornerstone of their creation. Now that there's tools like the FireScope/LightScope/IdealScope to judge them by, some cutters are using these as "checks" in their cutting process.

Someone emailed me an "ImageScope" image of a princess cut the other day which really impressed me. It was from SuperbCert. I'll see if I can get it to attach.

Darn. I couldn't get it to "take". Oh well. Gorgeous light performance for a princess cut. My hat's off to SuperbCert.
Rich, non-Independent GG Appraiser
Sarasota Gemological Laboratory
W

I wouldn't buy anything below a VS2. The inclusions on an SI2 will be easily noiticable with the naked eye. Just my humble opinion!

I think you are paying too much!!
and the stone is not a square as you can see from the measur. I think you can do better on the web!!
I also think that might be able to get a better quality for the price you are paying!! (si2 somtimes is on the border of not being an eye clean !)
just my 2 cents.