Are you a soldier or scout?

Which are you?
Soldier or Scout?


The Scout Mindset’ Review: How to ‘Update’ Beliefs​

Admitting our beliefs are false can feel like a failure, a sign of weakness. Instead, we should look at changing our mind as an ‘update.’​

Metaphors carry us from one idea that is difficult to understand to another that is easier to grasp. Many subjects are notoriously incomprehensible, making the use of metaphors essential.

The Newtonian “mechanical universe” metaphor, for example, transfers us from the difficult idea of gravity and the spooky notion of action-at-a-distance to the more understandable “clockwork” of gears and wheels. Enlightenment thinkers used the mechanical metaphor to explain everything from the human body (with its levers and pulleys of joints, tendons and muscles) to political systems (the king as the sun, his subjects as encircling planets) and even economies: François Quesnay modeled the French economy after the human body, likening the flow of money through a nation to blood coursing through a body’s veins; he compared ruinous government policies to diseases that impeded economic health, and therefore recommended laissez-faire.


The workings of the human mind are especially enigmatic, so scientists have long invoked metaphors such as hydraulic mechanisms, electrical wires, logic circuits, computer networks, software programs and information workspaces to help explain what’s going on.


In “The Scout Mindset: Why Some People See Things Clearly and Others Don’t,” Julia Galef, a co-founder of the Center for Applied Rationality and host of the popular podcast “Rationally Speaking,” uses a military metaphor of scouts and soldiers.
According to Ms. Galef’s divide, the soldier mindset leads us to defend our beliefs against outside threats, seek out evidence to support our beliefs, ignore or rationalize away counterevidence and resist admitting we’re wrong—as that feels like defeat. The scout mindset, by contrast, seeks to discover what is true through evidence, and reasons toward conclusions that lead to a more accurate map of reality—“the motivation to see things as they are,” Ms. Galef explains, “not as you wish they were.”

The differences between these two mindsets are striking and, Ms. Galef argues, explain how thinking goes right or wrong. Soldiers rationalize, deny, deceive and self-deceive, and engage in motivated reasoning and wishful thinking to win the battle of beliefs. “We talk about our beliefs as if they’re military positions, or even fortresses, built to resist attack,” the author writes. This soldier mindset leads us to defend against people who might “ ‘poke holes in’ our logic,” “shoot down” our beliefs or confront us with a “ ‘knock-down’ argument,” all of which may leave our beliefs “undermined,” “weakened” or even “destroyed.” Soldiers thus become “entrenched” in their beliefs, resisting “surrender” to an opposing position.

When our beliefs are true, of course, this can be effective. The problem is that almost all reasoning and decision-making happens under uncertainty, so the soldier mindset can easily lead to a perpetuation of error. In seeking truth—that is, an accurate map of reality regardless of which belief is right—scouts engage in more open-minded discovery, objectivity and intellectual honesty. “I was wrong” and “I changed my mind” become virtues instead of vices.

Soldier-types are more likely to believe that changing one’s mind is a sign of weakness, or that it is important to persevere in beliefs even when evidence is brought to bear against them. Scouts are more likely to take into consideration evidence that goes against their own beliefs, or think it may be more useful to pay attention to those who disagree with them than to those who agree.
Scouts, Ms. Galef explains, “revise their opinions incrementally over time, which makes it easier to be open to evidence against their beliefs.” They also “view errors as opportunities to hone their skill at getting things right, which makes the experience of realizing ‘I was wrong’ feel valuable, rather than just painful.” In fact, the author suggests, we should drop the whole “wrong” confession and instead describe the process as “updating”—a reference to Bayesian reasoning, in which we revise our estimations of the probability of something’s being true after gaining new information about it. “An update is routine. Low-key. It’s the opposite of an overwrought confession of sin,” Ms. Galef continues. “An update makes something better or more current without implying that its previous form was a failure.”

The scout metaphor deserves its place among the pantheon of cognitive metaphors, not only because it helps explain how people reason (or fail to reason) and why we so often get things wrong, but also why “we change our minds less often than we should but more often than we could.” Yes, Ms. Galef acknowledges, we “sometimes hide the truth from ourselves.” But, more important, she expounds on “the times we succeed in not fooling ourselves, and what we can learn from those successes.”
Ms. Galef has first-hand experience teaching people how to use the tools of rationality—like probability, logic and especially how to avoid cognitive biases—only to discover that this isn’t enough. Learning about cognitive biases no more improves your judgment than reading about exercise improves your fitness. Without the scout mindset’s attitude of curiosity and truth-seeking to undergird knowledge and the tools of science and reason, mental fitness will elude us.

“The Scout Mindset” describes how to cultivate those virtues in an engaging and enlightening account from which we all can benefit.
Mr. Shermer is the publisher of Skeptic magazine, host of the “Michael Shermer Show” podcast, and the author, most recently, of “Giving the Devil His Due: Reflections of a Scientific Humanist.”
Copyright ©2020 Dow Jones & Company, Inc. All Rights Reserved. 87990cbe856818d5eddac44c7b1cdeb8

"
“Until one has loved an animal, a part of one's soul remains unawakened.”
― Anatole France

To answer my question...I am open minded. I am a person of science and I am swayed by facts. So while I am confident in what I know I am not so foolish to think I know it all or even that everything that I think I know is 100% true. So yes, I am always open to facts and to changing my mind as things evolve. Rarely are things set in stone and things are changing and evolving always so I keep an open mind.


What about you?
“Until one has loved an animal, a part of one's soul remains unawakened.”
― Anatole France

I like to think I’m open minded. I’ll never assume to know everything and I have no problem admitting I was wrong in the face of new information. I‘m a very curious person by nature, which I think keeps a person more open minded.

elle_71125 said:
I like to think I’m open minded. I’ll never assume to know everything and I have no problem admitting I was wrong in the face of new information. I‘m a very curious person by nature, which I think keeps a person more open minded.
Click to expand...

Oh yes that’s so true. I too am curious by nature (Greg always asks me when I endlessly pummel him with questions lol, what, am I google?

). I think curious people are more open minded. Generally.
“Until one has loved an animal, a part of one's soul remains unawakened.”
― Anatole France

missy said:
Oh yes that’s so true. I too am curious by nature (Greg always asks me when I endlessly pummel him with questions lol, what, am I google? 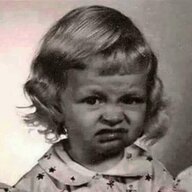 The perpetual pile of I Don't Know mountain that is me, takes a scout to climb it.

I find it harder and harder to be opened minded. Seems like these days everything is politicized or biased depending on
who is putting it out there. Not only do you have to research the subject you have to research the people/organizations putting out
these "facts". Sometimes its blatantly obvious but sometimes its almost impossible to get to the bottom of it.
~~~Thanks to PS, my wants far exceed my budget!~~~

The comparison is not valid because there is not one person who is sharply one to the exclusion of the other.
Making it psycho-babble.
I'm a grumpy old man, get off my lawn!
Karl aka strmrdr, Diamond Designer
S

I try to be the "scout" type because I do feel like it's stupid to insist that something is correct when it can easily be shown not to be or refuse to re-examine beliefs when given cause to.

However... at the same time, I also tend to find change annoying, when I did not ask for it. Sometimes it takes me a while to come around.
Last edited: Apr 18, 2021
You must log in or register to reply here.
Share:
Facebook Twitter Reddit Pinterest Share Link
Be a part of the community It's free, join today!
JEWELRY BLOG