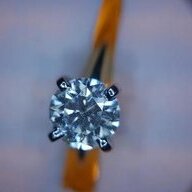 I've had my finger measured by 5 different jewelry stores, tried out 2 different sizing kits, and bought 5 test fitting stainless rings. They all say at 6mm width, my ring size is a 9.0.

So, my fiance orders a ring in size 9 and it is way too loose. We even went to a jeweler the same day to look for her wedding band and had them size my finger again. 9.0

But the reputable place we ordered this from is saying they sent us a 9.0 and that I would need to order an 8.75.

I'm wary of doing this as 8.75 is too tight for me from all other experiences.

Here is the ring in yellow gold 18k.
https://www.benchmarkrings.com/wedding-rings/benchmark/mens-wedding-rings/RECF7603Y

Well we decided to just get a refund and get the ring locally. Even though the store is a Pricescope vendor, my fiance dealt with about 6 different people in the process and there was a definite lack of continuity. The last straw was that they shipped the ring back to the manufacturer without testing the size of the ring and placed an order for one in 8.75. We had specifically asked them to check the size of the ring before doing anything else.

We can't take the chance of getting an 8.75 that is true to size and having it too small. Plus they wanted to charge us again for the engraving. We were REALLY surprised that no one sized the ring at the store before shipping it out to us in the first place. At least that's what it sounded like. We were given the excuse that not all manufacturers size their rings the same way. So that really confuses us as to why the store wouldn't size the ring themselves before shipping it out to the customer?

All in all we are disappointed in the experience and are not likely to deal with this store again. Which is really too bad, because they have such a stellar reputation here on PS and I've learned a lot from their contributions to these forums. They were actually my second choice for the ERing. But there's no way the fiance will have anything to do with them again. 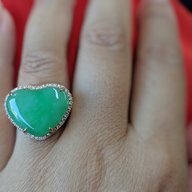 I have a few size 6 rings that all fit differently

One is definitely looser and fits like a 6.25. One is just spot on I think and one is ever so slightly more snug. All from different vendors. I reckon the thin band was a looser fit and the bigger band was the tighter one so might have something to do with the band size.

Lucky they are all coloured stone rings so can be worn on both hands and one had has larger fingers! 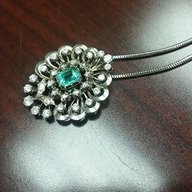 I know for sure that the mandrel my new jeweler uses is about 1/4 of a size off from my old jeweler. My wedding ring was sized at 5.75 for my wedding and has never been sized since then, and it measures 6 at my new jeweler.

Yes, I was very naive. It makes me very cautious about buying a ring on-line in the future. I guess that's why on-line jewelers usually have easy return policies?
You must log in or register to reply here.
Share:
Facebook Twitter Reddit Pinterest Link
Be a part of the community It's free, join today!
JEWELRY BLOG

The Pricescope 20 most beautiful engagement rings ever