anyone here own clarity enhanced diamonds? 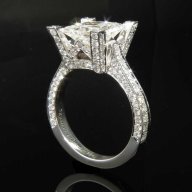 Hi everyone, I would really appreciate it if you guys could help me make up my mind. A friend of mine told me about CE diamonds and how you could save a lot of money and still get a bigger stone. I have read all the posts with the advantages and disadvantages, I was just hoping if those here who might sell or own CE diamonds would give me their opinions and experience with CE diamonds and perhaps post pics if possible.

I am not even sure where to buy CE diamonds so if anyone knows of any vendors that could help me I would appreciate it so perhaps I can see some in person to make up my mind.

If you do a search for SanDiegoLady and Woobug, they both have CE diamonds and as far as I know are very happy with them. They should have a topic on their rings and pics, so you can read what they have to say and you can make your own mind up.

As you know, there are companies who produce these diamonds, basically there are 2 methods - one of which is fracture filling, rather like filling a crack in a windshield. The feather or 'crack' can be seen before enhancement, the treatment is added and alters the light path through the flaw in the diamond to make it invisible hopefully. These diamonds need special care at times, you should not use ammonia based cleaners as these can damage the filling, also let any jeweller who works on the diamond know it has been enhanced, as various acids and their blowtorches can harm the enhancement. However, if the filling does leak out, the companies who treat the diamonds will do it again for free for life. Generally, the clarity of these diamonds is graded after the enhancement, but you pay the price of the untreated diamond's clarity. For example an I2 diamond which is graded an SI2 after enhancement, normally you pay the price for an I2 diamond.

The other method is lasering, this is suitable for carbon spots or some dark inclusions in the diamond, lasering can make them less noticeable. If I remember rightly, GIA will grade lasered diamonds but not fracture filled.

I hope this helps and gives you some idea of the pros and cons!
Pricescope Prosumer

But I believe that SanDiegoLady also said that she would have never gotten a CE stone if she had known more at the time. There can be problems with them. I wouldn''t risk it.

Date: 12/29/2006 9:21:23 AM
Author: diamondseeker2006
But I believe that SanDiegoLady also said that she would have never gotten a CE stone if she had known more at the time. There can be problems with them. I wouldn''t risk it.
Click to expand...

I have a CE diamond (I bought it on ebay and sent it in to be enhanced), and I just managed to put a new crack in it. I don''t know if the enhancement had anything to do with that or not. Definatly get insurance if you buy one.

Date: 12/29/2006 9:21:23 AM
Author: diamondseeker2006
But I believe that SanDiegoLady also said that she would have never gotten a CE stone if she had known more at the time. There can be problems with them. I wouldn't risk it.
Click to expand...

Thanks for posting that info, I must have missed where she said she wouldn't do it again...However I just wanted to add that there does seem to be a market for them and the OP will hopefully get the info she needs to make her own decision if one is right for her. I do believe Woobug bought a CE with full knowledge as this was they way for her to get a large rock and as far as I am aware is pleased with her decision.
Pricescope Prosumer

The other method is lasering, this is suitable for carbon spots or some dark inclusions in the diamond, lasering can make them less noticeable. If I remember rightly, GIA will grade lasered diamonds but not fracture filled.
Click to expand...

Technically this is not Clarity Enhancement as the term is used in the trade. CE refers to the fracture filling method. Laser drilling is considered a permanent treatment since it can not be reversed while it is easy to drive the filling out of a stone by using heat etc. (This is usually done unintentionally by some poor benchie who was not informed of the treatment and who did not take a close look at the stone prior to working on the mounting.)

I would also say that the stone will not normally be sold at the cost of the untreated stone, but rather somewhere between the cost of the untreated and the treated. The treatment itself must be paid for, and I would suspect that it might be unusual to find someone who would tell you that the stone was originally an I2. Dealers in these stones are doing it to increase their profits on normally hard to sell items. Pricescope readers here are seldom the type of client who want big and semi splashy, but there are many people out there that buy that material.

Location actually plays a big part in that market. My jeweler friends in the South tell me that they sell a LOT of big, flash for the cash, diamonds, where many other parts of the country quality is more important than size.

I often get surprised though, more than one of my clients has come in with the recipient of a surprise engagement ring to "upgrade" the size while keeping the expense near or at the same. I think it is important for us to remember that what we decree as "true" here on Pricescope is often true for the bulk of Pricescope readers and fans, but not necessarily for the overall jewelry market. Our readership tends to be much more educated about quality issues than many of the jewelers in the marketplace.

I truly wish the market was more in line with the average Pricescope member''s thinking, but the success of all of the Mall type stores and the "stuff" usually sold in the Walmart type jewelry departments tells me that we are still far from the mainstream. I still dream of a world where that type of material is used for industrial purposes as it should be, but on this, my sixtieth birthday I fear that reality is not a lot closer than it was when I vowed to make it so when I was a young GIA graduate at 27.

Thank you Wink for clarifying that - not doing too well today I'm not!

ok, see I am one of those people that likes bigger sizes however I don''t like yellow stones I like the very white DEF colors as some G stones I have seen have been a bit yellow for my liking. I am not as picky with clarity however don''t want a stone that has black/white spots and cracks and visible inclusions that look wierd.

So knowing this, do you think I would like CE diamonds and if so anyone knows of vendors I can contact and what to do and expect from CE diamonds?

And by the way, best birthday wishes Wink.

I think your best bet is to contact your local jewellers and see if they stock them for you to see, also try a Google search on CE diamonds and you can read up on them and the companies who do them there. CE diamonds are not plentiful on these forums

I just remembered this useful page from Jon at Good old Gold about CE diamonds, here he explains about them and his opinions of them. This should be helpful to you and gives you further advice on where to look for them.