Merry Christmas!
I just bought this for my wife..
Can you tell us what the style is or what you would call this type of ring?
Do you know anything about this type of setting, what it was called?
The two larger diamonds are "old mine cut"..from what I have learned..the "tips" are cut off and there is a hole there now.
I am an artist and know nothing about diamond and ring settings.
Any help would be greatly appreciated...
Thanks and you have a wonderful site with a tremendous amount of information!
I have attached a picture of the ring.
Thanks!
Martin 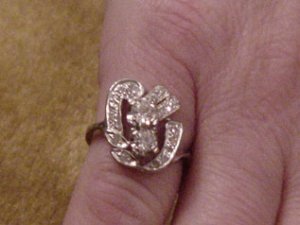 Hi Martin. The two center diamonds being "old mine cuts" would place them as being circa 1880 or so. The ring however is newer. It looks like 50's styling, with the ring being made to accomodate the two old mine cuts.

I don't think there's a particular name for the style. If I were appraising it, I would refer to it as a diamond "cocktail" or "fashion" ring.

Richard,
Thank you so much for replying to me.
The larger diamond is 1/2 ct and the smaller is 1/4 ct...
The rest around the ring add up to about 1/4 ct.
It is white gold. The gentleman I bought it from had know idea the value as niether do I.
Can you tell me what I should insure it for..
I know this is a tough question, but any idea would help.
The stones are very clear and glisten.
Thanks again for your expertise!
Regards,
Martin Hirsch

Martin, it's tough to tell without knowing the quality of the stones, etc. You should take it to an appraiser to get the exact specs and his opinion of the value.

That said, just for fun let's say hypothetically that the diamonds are "average" quality, in the neighborhood of HI color, SI clarity (near colorless, slightly included). The little diamonds are probably single cuts, which is what was often used in those 50's style rings. The Old Mine Cuts have probably "fair" cuts at best, which was typical for the era cut. And the workmanship looks like it is probably good.

That scenario considered, you probably would be okay with an insurance coverage in the $1400 to $1700 neighborhood. Higher quality would be more, lower quality less.

How much did you pay for it?