A Supermoon Like This One Won’t Come Again Until 2034

A Supermoon Like This One Won’t Come Again Until 2034
Skywatchers are in for a big, bright treat in two weeks!
http://www.huffingtonpost.com/entry/supermoon-watch_us_581a04e6e4b0a76e174c3538

On Nov. 14, skywatchers will be treated to a supermoon so big and bright that it’s being billed as a “super-dupermoon” or an “extra-supermoon.”

Supermoons aren’t especially uncommon, but this will be the nearest that a full moon has come to Earth since January 26, 1948. The full moon won’t get this close again until November 25, 2034.

The term supermoon refers to a full moon that occurs when our planet’s natural satellite is at its closest point to Earth in its elliptical orbit. Astronomers call that point perigee, and so “perigee moon” is another term for supermoon. (The point at which the moon is most distant from Earth in its orbit is known as apogee.)

A supermoon can appear up to 14 percent bigger and 30 percent brighter than an apogee full moon, according to NASA. The effect is most pronounced when the moon is viewed near the horizon.

This supermoon is one of three to occur during the last three months of 2016. There was a supermoon on Oct. 16, and there will be another on Dec. 14. But this one coming up will be the most special of the lot ― so try not to miss it.

What’s the best way to see the supermoon?

“Just find a dark area clear of trees,” Dr. Noah Petro, a scientist at NASA’s Goddard Space Flight Center in Greenbelt, Maryland, told The Huffington Post in an email. “Anytime after dark is good and once the moon is up. There is no prime time when people have to do it, but the moon has to have risen for people to see it! : )”

Dang it I hope that these clouds go away at some point this week so I can see it. I have been waiting these past couple days.
What others think of me is none of my business.

No chance of seeing even a hint of the moon as it is cloudy where I live, hey ho!

We kept an eye out for it at 6 am EST. It was bright and yellow, and so beautiful.
Sometimes the mind ignores what is logical because the person cannot accept the reality of what it is.

My son got off the bus chanting "supermoon supermoon", he is very excited but it is really cloudy and I don't think we will be able to see it. When I told him this he said, well the clouds have to move at some point. Ever the optimist

Momhappy, I apologize. I must have missed it amongst all if the political threads.

I didn't mean to start another thread in the same topic.

Momhappy, I apologize. I must have missed it amongst all if the political threads.

I didn't mean to start another thread in the same topic.

No worries! I'm glad you did actually Mine fell down to page 3....
I was bummed earlier tonight because it was looking much too cloudy, but I just took the dogs out and I can get a glimpse through the clouds! I'm going to keep checking.
M 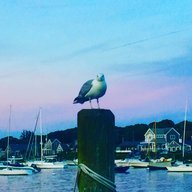 Ugh it's pouring here. Happy for those who were able to enjoy it!!!
"Whenever someone tells me to feel guilty, I assume they're trying to program me."
"It's called KARMA, and it's pronounced HAHA"

No dice. Clouds were low on the horizon and now its a faint white blob behind cover. Dang. Going to Oregon tomorrow for a few days and I hope that their weather is better.
What others think of me is none of my business.
M

Bummer! Sorry Red.
You can check next month too - although it's not quite as big and bright, but still a super moon

Not able to see it because of the cloud cover. I got some amazing shots of Saturday/Sunday's moon though.
Instead of telling people to "have a nice day", sometimes I tell them "have the day you deserve", and let Karma sort that mess out....
You must log in or register to reply here.
Share:
Facebook Twitter Reddit Pinterest Share Link
Be a part of the community It's free, join today!
JEWELRY BLOG