So I've been a lurker for awhile now. Since there isn't much information on here about the vendor I used and Radiant cuts, I'll post some info.

We started looking at rings about 9 months ago, I knew I didn't want a round, far too common and boring (IMO), and had decided I wanted a cushion cut with sapphires. After visiting a store with a friend, I saw a small radiant cut and was instantly hooked, the cushions and rounds just paled in comparison. So our diamond search began. I wear a size 7 ring, so I wanted the diamond itself to be a little larger. When I told BF I wanted a 2 carat or larger, he panicked. But I knew the budget and I am quite the price shopper, so I began the research quest.

Our goal was to make sure any stone we purchased was "conflict free", as relative as that is. We initially looked at Blue Nile, and I loved the sapphire settings they have, but they were expensive comparatively. After some more independent searching, I came across Danforth Diamonds, whose prices were highly competitive. After some months deliberation and some price rises, we took the plunge about 2 weeks ago and made the diamond purchase. Interestingly enough, while waiting for the diamond, I came across this forum and have been reading obsessively while waiting for it and pretty much panicking that I'd done badly in my selection. Here are the specs on our purchase:

It has an EGL certificate, and after reading this site I was panicking that it wasn't GIA. Putting these specs into the Atlas calculator, it is ranked as a 2b for a Radiant cut, or "fine international trade".

It arrived, and we nervously inspected it. I am happy to say, it is truly radiant. It is a bit deep, which makes it appear a bit smaller for its carat wt, but it is simply stunning. It does have some sort of "cloud" through it that makes it an SI1, however, it is only visible from behind if you know where to look and not at all visible from the front. We immediately took it to a local jeweler to look at it and appraise it, upon initial inspection, he says that the EGL cert is pretty spot on with the grading. We had it formally appraised, and it came back at $2,100 more than we actually paid for it, which is relative, but a good thing I suppose. We have picked out a setting that must be special ordered, but I don't expect to receive it for at least a few months. Here are some pics of the loose stone, we've obviously decided it's a keeper! Our experience with Danforth was good, it arrived exactly when they said it would and the stone is gorgeous. I am attempting to attach the pictures I was able to take, the lighting was a bit yellow, so it appears a bit warmer than it is in person.

Hi Hazey - I didn't see any photos attached. Can you re-upload? Would be great to see it!

I'd love to see pictures of this radiant!!!
H 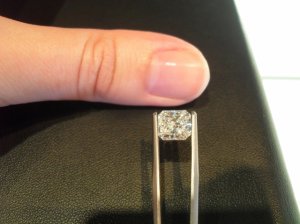 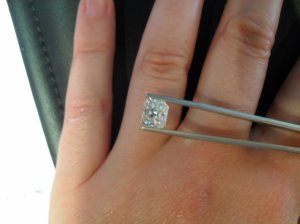 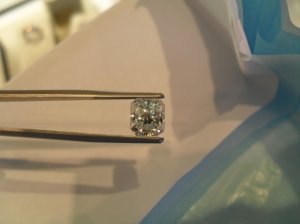 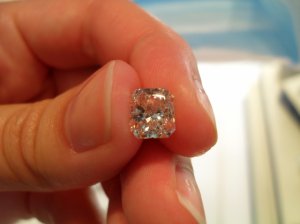 We've also decided to do another controversial thing, according to this site anyways, and went with a palladium setting.

Thank you! We've just finalized the setting. It should be "ready" within the next 3-4 weeks, however, I don't expect to actually be presented with it for at least another 2 months.

Will definitely share final hand shots when it is received! I can't believe radiants aren't more popular, it was almost impossible to view any radiants in jewelry stores.
I

Gorgeous stone! I also love radiant cuts. I originally thought I wanted a round or asscher, but I fell in love with radiant cuts when I saw several gorgeous ones while I was out window-shopping! I can't wait to see how you set it!

ETA-forgot to say that I set mine in a halo with baguette sidestones. Mine is a 1.51 G/SI1. I think they also look great in more minimalist settings...SuzyQZ has an amazing ring with radiants if you want to do a search!
You must log in or register to reply here.
Be a part of the community It's free, join today!
Jewelry Blog