As I mentioned in my other thread, I'm close to purchasing but have continued to browse for that "perfect" diamond. I found this IF, H color diamond that is priced less than similar Ideal cut diamonds that I have been considering with VS2 quality.
$7,851
https://www.ritani.com/diamonds/round-diamond-1-35-Carat-H-color-GIA-certified/D-WS10H9

I know that I really don't need an IF diamond as I've been looking in the VS2 range, but I figure there's no reason not to consider it if it performs well and is actually priced less than the other diamonds I am considering. It scores 1.3 on HCA and I would be able to view it in store before buying.

Is there something that I'm missing about this diamond? Is it too good to be true?

P.S. I have noticed that the well priced diamonds seem to have GIA report dates from Aug/Sept 2015. Is it just my imagination or have diamond prices continued to fall in the past couple months?

Well, I see nothing wrong with it. Seems like a nice cut stone at a really good price. Post pics when you get it and let
us know if its as good as it seems.
~~~Thanks to PS, my wants far exceed my budget!~~~
G

That seems like a fantastic deal! Nice find.
J

The photo and video have been posted on the website!
https://www.ritani.com/diamonds/round-diamond-1-35-Carat-H-color-GIA-certified/D-WS10H9 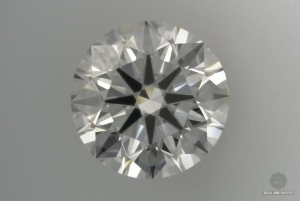 I'm more of a numbers guy and don't have the best eye for these things, but I think this is the one! Please let me know what you see from the video.

No ASET or Idealscope, but I should be able to compare it in person to the 1.38 H VS2. Even with the VS2 grade I was a little concerned about the black carbon inclusions under the table. It may still have been eye clean, but I think this will give me and my future fiancé (hopefully) peace of mind, especially given the value of the IF stone.

I look forward to your thoughts. Thanks!
J

Sorry for the lack of updates, but I was finally able to see this in person this weekend. To me, it looked like a very good stone, but the gemologist suggested it lacked some fire. Although he also suggested that the lack of fire was due to the faint fluorescence (not cut) even after I asked him to clarify several times, which seemed rather other to me...

He brought out a very good cut, G color diamond for me to compare as an example of a stone with a lot of fire. Indoors, I actually couldn't really tell much of a difference between the 2, but outdoors I felt the one I chose was a wonderful performer. I realize he was talking about retail prices, but the stones he showed me in my price range were all in the 1.1X range, so I don't think I can do much better for the value even looking at prices online.

Due to an apparent mix-up in their offices I was not able to get a SARIN report for this diamond. I'm going to try to push for the report before I make my final decision.
D

So... does he mean the thing that causes this diamond to have lack of fire is the fluorescence or is he suggesting that it's not cut that affects fire in general?
The former sounds more plausible, but then it means the fluorescence is making the diamond looks a bit hazy/oily and the brightness etc. will also be affected.
If it's the latter... that's new to me. I've always thought the cut & interaction between angles are what determine the amount of fire. And based on the numbers (34.5 crown angle, combined w/ 40.8 pav angle, for a 15% crown height) yours should have plenty.

I'm not sure if you still need the SARIN if you already are able to see the diamond with your own eyes.

By the way, different lighting condition may be needed to evaluate and compare fire.
Have a look here:
https://www.pricescope.com/wiki/diamonds/diamond-brilliance-fire-scintillation

Oh, and make sure the diamonds you are comparing are clean.
S

The faint fluor should not be an issue. And I would think that the difference would be more apparent outdoors where presumably the UV light is strong. It should have looked worse.

From the image and video it looks very nice and the specs are great too. I wouldn't let him dissuade you if you thought it looked great. By all accounts it should be a performer so if your eyes confirm it then but it.

Also wondering if the jeweler is giving an unbiased opinion? Is he trying to sell you one of his stones over this stone from Ritani?
If so, I think you can ignore what he says and go with your own opinion of what you saw with your own eyes.

I hate the video...doesnt really help much with looking at light return but the stone has all the right numbers and the faint fluor
should be a non-issue.
~~~Thanks to PS, my wants far exceed my budget!~~~
J

Thanks for all your thoughts and the additional information.

He seemed to be suggesting that the thing that caused the lack of fire was the fluorescence, but I did not see any haziness in the stone and it looked very clear when I was outside. Based on everything I've read here and what I saw I am not concerned with the faint fluorescence.

By the time I was ready to leave the store, the jeweler freely admitted that nothing he could offer would come close to the stone I was looking at given the price range. He actually called me again yesterday afternoon to say it was a very good stone and a great value and I should not hesitate to buy it. I also had similar concerns about whether the Ritani reps were being unbiased or not, so I am glad I got to see the stone in person. Granted I was very careful with my selections, but almost all the stone I suggested the reps would describe as being beautiful or stunning diamonds.

Having looked at many Ritani videos, I agree that most of their videos do not show the light return too well, and especially for stones they do not have in stock. But after seeing it, I know this is the one and I am getting so excited!! Ritani has agreed to run the Sarin report as we originally agreed which will give me a little more time to decide on the setting. I'm looking for a platinum ring with a band as thin as possible but also with diamonds set in the band.

This is the only setting I'm considering from Ritani. It's a little more than I wanted to pay but I also spent a little less than I planned on the diamond:
https://www.ritani.com/engagement-rings/french-set-diamond-band-engagement-ring-with-surprise-diamonds-in-platinum/4996

This is the band that I really like from JA and if I had gotten a diamond from JA, this would 100% be my choice. I know there is more workmanship in the Ritani ring, but I like the very thin band and the simplicity of the JA ring which will showcase the diamond.
http://www.jamesallen.com/engagement-rings/pave/platinum-thin-french-cut-pave-set-diamond-engagement-ring-item-2018

Does anyone have any experience with having the diamond set with a different vendor? Is it worth the hassle?

I see several PSers have posted the finished thin ring from JA. Any concerns with durability with such a thing band? My jeweler recommended 2mm as a minimum band thickness (or thinness) especially with diamonds set in the band.

Should I consider going to 18k or 14k gold on the Ritani setting?

Here's a quick cell phone photo that I snapped under the jewelry store lights! I don't know why it looks a little dirty or something in the photo when you zoom in, but it looks perfect in person. I'll post some more once I pick up the finished ring. 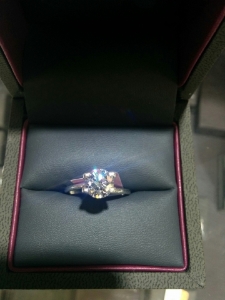 Hard to tell form the pic but the diamond does look nice, congrats!

Personally, I would stick with the platinum setting so you don't have to re-dip it every few years as you might with WG. I've seen a couple threads where people have complained that their pave diamonds seemed to have lost some sparkle after the ring was re-dipped.

Is it worth the hassle to have it set elsewhere? To me it is. Sure you might have to pay to ship the diamond but I feel it's wroth it to get the setting you want. 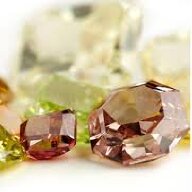 I went to my local Ritani affiliate jeweler again this weekend to look at settings and found 2 that I really like. Does anyone have any experience with the quality of A Jaffe rings? They are a little more pricey than the Ritani settings I was considering but they are also a little more artisan. The big question for me is if it is worth the extra money for the halo. 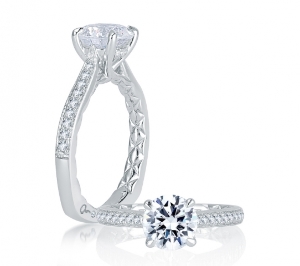 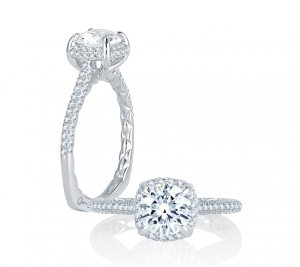 I'm not wavering on my decision for the 1.35ct diamond, but the jeweler suggested a 1.55ct J VS1 diamond that is listed for $10,600. At a minimum it will be a good point of comparison when I receive my diamond even though it is bigger and more expensive. It faces up a lot whiter than I would have expected for a J color stone and the jeweler suggested it may have been under graded.

He was also able to offer an all in price of $12,500 (including 8.75% tax) for the 1.55ct stone and a $2800 setting (the one with the halo), which by my math works out to slightly under $9k for the diamond. I would have to pay full retail price for the setting if I get the stone from Ritani. The diamond is an AGS Excellent 1, but shows some slight leakage under the table. Here's the AGS report: 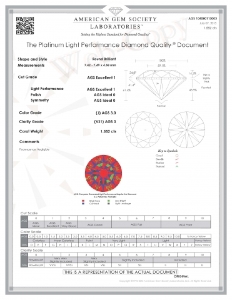 Sorry for the long post, but this is also just for me to get my thoughts out on paper as well! I guess this also helps to show the amount of markup on the retail prices of diamonds in B&M stores.
J 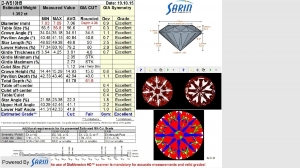 I finally got the SARIN report and light trace image and there's quite a bit of interesting information that I need to do a bit of research on. The light trace image looks good and is noted as an AGS 0. However, the estimated cut GIA cut grade is only FAIR compared to the excellent cut grade on the actual report. The numbers suggest a GIA excellent cut rating, but the fine print notes "Cut grade deduction due to brillianteering." Can brillianteering really cause a rating drop all the way from Excellent to Fair?

I'm going to do a little more research on brillianteering, but I would appreciate your thoughts on the FAIR estimated cut grade and the information on the overall results.

Thanks!
You must log in or register to reply here.
Be a part of the community Get 3 HCA Results
Jewelry Blog