ABC News correspondent Dan Harris and gem and jewelry expert Antoinette Matlins went undercover to reveal that two jewelers from the New York Diamond District sold them fracture-filled diamonds without proper disclosure, according to a segment from ABC’s The Lookout, which aired yesterday.

Harris, Matlins, and a Lookout producer wore disguises and carried hidden cameras, while visiting the two jewelers. They also met with a jeweler who sells clarity-enhanced diamonds with full disclosure.

The segment’s focus is on fracture-filled diamonds, which are typically lower-clarity stones with multiple fractures or cracks–known as “feathers” in diamond grading–that are often filled with a lead-glass substance to improve their appearance.

The videos also show that the fracture-filled diamonds are sold with inflated appraisal values that mislead consumers into thinking their stones are worth far more than what they paid. A fracture-filled diamond is worth significantly less than an untreated stone of similar carat weight, color, and clarity. And the documentation that comes with these diamonds states the diamonds’ clarity “grades” after enhancement. And though the clarity grades are marked with an asterisk with a note stating “Clarity Enhanced,” the average consumer may not be aware without proper disclosure.

Antoinette Matlins explained that there are many reasons a shopper may want to buy a clarity-enhanced diamond, including that one can get a larger diamond for a lower price. But proper disclosure is key.

“Unfortunately there are jewelers who sell them without disclosure. In the gem and jewelry field we say, ‘in gems you get what you pay for…or less,'” said Matlins.

Watch the ABC News videos below and join our discussion on the Forum. (Videos require Flash) 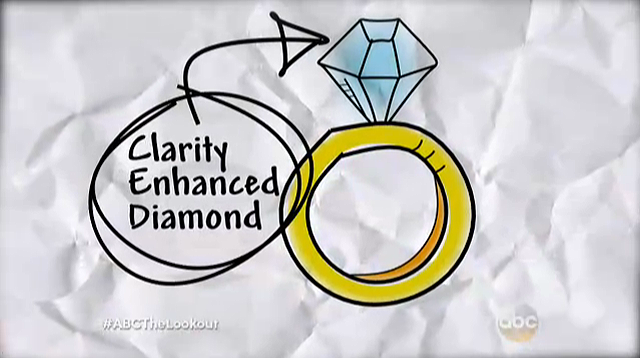 Check out Antoinette Matlins’ tips on bying the best engagement ring for your budget:

Discuss on the Forum:

ABC Does Some Undercover Diamond Shopping