…and judging from the few released pictures, she wears it beautifully. The highly anticipated biopic, “Diana,” stars Naomi Watts as the late Princess of Wales. The film has created a stir, as fans are eager to see the star’s portrayal of the iconic royal. We imagine the scrutiny will be intense. Watts recently told Ellen DeGeneres on her show that she felt “high pressure” playing the role.

Well we can’t wait to see Watts and her stunning co-star, Chopard, perform on the big screen. According to a New York Times interview with Chopard co-president Caroline Scheufele, the luxury house has already designed about 30 pieces for the film, including oval-shaped sapphire and diamond earrings which resemble a pair Diana often wore. The film, which is expected to be released in August 2013, will feature Chopard jewelry exclusively. 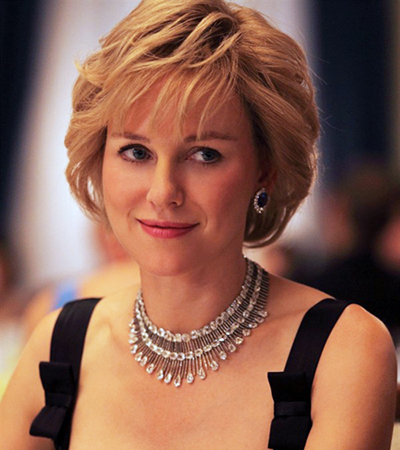 Naomi Watts plays the late Princess of Wales in the upcoming biopic, “Diana.”

Jewelry Musing on Baz Luhrmann’s Adaptation of ‘The Great Gatsby’