The role of contrast in diamond appearance

A chess board is 50% black; it returns half as much light as a sheet of white paper. But a chess board looks brighter than white paper when they are both moving. The same is true for a diamond; if a stone returned light so that the crown was bright all over, it would not appear as bright to your eye s as one with good contrast. While light return is an important part of ‘brilliance’, our perception of brightness is enhanced by our eyes adaptation to contrasting backgrounds. All six patterns in Fig 1 are equally bright to a light meter, but those with good contrast are more brilliant to our eyes. Diamonds with good contrast, caused by alternating very bright and very dark facets, appear brighter because of the psycho-physiology of the way we see. Unfortunately light meters can not be programmed to work like the human mind and this is one reason why designing diamond cut grading systems is very difficult. 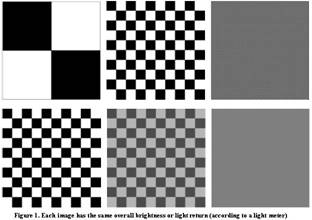 Figure 1. Each image has the same overall brightness or light return (according to a light meter)

Take for example two exactly equal diamonds of 5ct, and 0.30ct. They have different facet sizes and to our eyes they appear to have different brilliance and scintillation. The top right hand pattern in Fig 1 has squares that are too small to be distinguished by our eyes, like many of the facets on a smaller diamond, but some facets on the larger stone could be too large, like those on the top left.. When asked recently about this example, the GIA Cut Study team acknowledged that there would be a difference in appearance, but that their new cut grading system would give each stone the same grade. A Cut Group cut grading system will account for such differences.

Systems like the Brilliancescope™ and I-see2™attempt to analyze a diamonds contrast patterns with a camera, but try as they might, such systems can not completely account for human perception. Try this experiment; hold a diamond very still and count the bright flashes with one eye closed, then open both eyes and count again. Two eyes can see as many as twice the number of contrasting bright flashes than one eye (or a camera lens).

If a bright facet has darker adjoining facets, the bright facet will have good contrast and appear even more brilliant, like the lower left pattern in Fig1. If there is very little contrast between adjacent facets then there will be little sparkle, like the lower center and right side in Fig 1, even though the overall light return may be the same.

A diamond with positive contrast has an even distribution of bright facets and fewer but well distributed dark facets that alternate as the stone is rocked from side to side. Facets which appear bright act as windows and mirrors to direct your line of sight toward light sources or bright areas in the environment. When your line of sight is directed toward a dark part of the environment, or the light leaks out the pavilion into a dark area behind the stone, that facet will appear dark.

To help understand this let us consider some well known examples of diamonds with negative contrast; the ‘nail-head’ which has a very deep pavilion, the ideally proportioned ‘Tolkowsky’ and finally dark shallow diamonds. All three are shown in Fig 2.

Figure 2. Photos of diamonds with pavilion angles reducing from left to right. Note the differences in contrasting darkness and brightness.(These photo’s are from GIA’s Foundation article)

Consumers are often shown simplified ray path sketches to explain diamond cut quality and why there is a loss of brilliance caused by leakage out the pavilion of a diamond; these explanations are wrong! The main cause of darkness is your head and body obstructing light sources. In the examples photo’s shown the camera lens is the source of darkness in the table of the ‘nailhead’ and most of the darkness in the shallow diamond in Fig 2.

A ‘nail head’ is a round brilliant with a deep pavilion, near 45° or 50% depth (like the left in Fig2). Seen from the face up direction, your line of view from most facets within the table area is directed back toward your head, as in Fig 5. Because your head blocks most potential lights, the table area of the stone appears dark and dull. The ‘bow-tie’ in some marquise, pear shape and oval diamond is also caused by Head Obstruction of light sources. Peep through a small hole in a sheet of copy paper and the bad ‘bow-tie’ disappears. But the dark star pattern in the middle stone in Fig2. is also caused by observer obscuration; this amount of evenly distributed darkness adds contrast which increases our perception of brilliance.

Shallow diamonds leak less light out the pavilion than so called ‘ideal cuts’. To leak like the De Beers shallow example, the pavilion must be abnormally shallow (near or below 25° or 23% pavilion depth). Shallow diamond darkness is also caused by your line of sight being directed back toward your head (obscuration) as shown in Fig 5. Reverse the ray path and the dark crown facets have a line of sight out the table and back in the direction of your head.

Leakage does also cause darkness; the crown facet area of the deep stone in Fig 2 is darkened because of leakage. But leakage can also produce good contrast. The small ‘v’ shaped dark areas at 12 o’clock near the girdle in the Tolkowsky stone in Fig 2 show contrast that arguably improves this diamonds appearance.

Princess cuts exhibit very little head obscuration. Much of the contrast in a princess cut is caused by leakage, and if it occurs in small and well distributed ‘virtual facets’, leakage can cause good contrast. But the four triangular dead areas that you sometimes see in Princess cut’s are an example of poor contrast caused by too much leakage.

Symmetry and Contrast
Symmetry plays an important role in diamond contrast. In a 1ct round brilliant of good proportions good alignment of facets relative to each other helps create desirable contrast. But a very large round brilliant (say over 10ct) with excellent symmetry may appear to have too few facets than the same sized diamond with less well aligned facets. This is the topic for a separate article.
A One Eyed View

The GIA Cut Study Team, in their Fall 2004 Gems & Gemology ‘Foundation’ article, discussed a diamonds ‘pattern’. Part of their study involved examining diamonds for brightness with trained observers viewing the diamonds through a small hole in various white domes sitting above the stone. The domes had different black and white shapes and patterns painted inside to create repeatable lighting environments. But all these tests were done with one eye closed so that they could attempt to validate their computer results which also failed to consider the fact that humans have two eyes and a complex mind that interprets the dual visual data.
Master Stone Set

The Cut Group will establish a Master Stone Set that includes diamonds that display a wide variety of contrast pattern sizes, intensity and distribution resulting from variations in proportions and symmetry. These Master Stones will be shown to experts from different parts of the trade, and from different countries and cultures, to establish the effect of proportions and symmetry on the Basic Light Response (BLR) for “contrast”. The diamonds will be viewed stereoscopically in a controlled environment. Scans of these diamonds will produce 3 Dimensional models that will be analysed with predictive software. Using fuzzy logic technology, the software’s ability to predict human BLR’s for contrast will be refined.

By comparison a survey conducted by the GIA focused mainly on finding the proportions or ‘parameters’ for the most beautiful to least beautiful round brilliant cut diamonds in different lighting; this ‘parametric’ approach was restricted to round brilliants. The Cut Group method is easily extended to any shaped stone and most importantly can be employed in the planning and design for manufacture of rough diamonds into polished of any preferred shape (including free form styles).

One criticism made in this review of the GIA Foundation study is that trade experts tend to perpetuate existing norms; expert conditioning and experience leads them to judge diamond beauty with ‘my baby is beautiful’ thinking. For example diamonds with very small, or very large tables, were more likely to be downgraded in the GIA survey which asked participants to grade overall beauty in different lighting conditions. The Cut Group will ask trade experts to describe many separate features (BLR’s) of diamonds. Surveying experts for many separate BLR factors means there is less chance that proportion factors, like table size, will subconsciously influence their observations.

In addition to contrast, several other BLR’s, such as light return, fire, scintillation, fisheye and nail head type effects etc will be surveyed until the software can consistently gauge each diamonds BLR response from the 3D scanned model. The software will then be capable of predicting diamond appearance and desirability in human psycho-physiology terms.