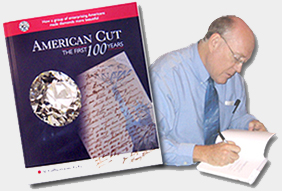 Many of us know Al Gilbertson as an esteemed cutter, gemologist and innovator. Add “mythbuster” to his titles. Mr. Gilbertson has produced a gem of a book, sure to be a page-turner for enthusiasts of “ideal” diamond cutting origins.

“American Cut – The First 100 Years” documents important changes between 1850 and 1960. The book focuses on the evolution of cut in the United States and gives historical legs to some of our truncated trade myths. There is special focus on American production prior to Marcel Tolkowsky’s 1919 work “Diamond Design,” which is often credited for bringing groundbreaking new “ideal” proportions to the trade. Readers may be surprised to learn that Tolkowsky did not use the term ideal, nor was he the first to discuss ray-tracing. In fact, when he wrote his book in London, diamonds of the same essential angles had been coming out of Boston and New York for decades. And while his well-known model gave precise theoretical proportions he thought optimal, the tools of his day were not actually capable of measuring in the half or three-quarter degree increments he put forward. Tolkowsky acknowledged that “millions of pounds of well-cut diamonds” in the same narrow (by the standards of the day) range of proportions had already been cut in his family’s factory.

So why is Tolkowsky said to have been the first to ray-trace a diamond (myth) provide this range of proportions (myth) and write a doctoral thesis about them (myth)? As Mr. Gilbertson notes, “the origins and the reasons for how the standard came about sometimes become hazy, even lost, and lack of knowledge or understanding give credence to myths.” Gilbertson has spent the past 30 years researching written and living sources – the book has an astounding bibliography of nearly 300 entries – to bring us a fascinating and thorough overview of the evolution of American diamond cutting.

The first chapter is a historical prelude with emphasis on cutting details. Gilbertson documents measuring devices and proportions recommendations that appeared as early as 1750, discussing important figures like David Jeffries, who wrote a treatise, developed tools and encouraged certain proportions, rather than acquiring the most weight possible by following the rough’s outline. Jeffries was among the first to say a diamond should be valued based on its spread rather than how much it weighed. His views were not popular.

The book’s most compelling saga involves Henry Morse, an artist and diamantaire from Boston who battled for beauty over preservation of carat weight in the 1860s. Morse could not stand the imprecision of diamond cutting. He traveled overseas to see how things were done, then set up his own cutting works. His insistence on new approaches infuriated his first workers, who had Dutch backgrounds, and he battled them until he was able to teach American workers – including the first female diamond cutters – to replace the Dutch. Morse’s insistence on symmetry and angles eventually resulted in the invention of the first bruting machine and angle gauge (the book contains many drawings and photos). He made a name for himself by speaking out against old methods of cutting. As demand for his diamonds grew his cutting style became known as “American Cut” and gained attention. Gilbertson reports that Isaac Herman was one of the first to follow this style. In 1871 Herman observed Morse’s cutting and put together his own team in New York. Others followed suit, including Tiffany & Co, one of Morse’s clients, who continued to buy from him even as they induced his workers to come work for them. In 1891 the Scientific American did a story on Tiffany & Co. and “Scientific Cutting” became the buzz. As these terms “American Cut” and “Scientific Cut” gained momentum, advertisements for square diamonds were replaced by round. The Europeans resisted the new style of cutting because the corners and so much of the top was lost in the process, but their cushion cuts were becoming blas?. Some Antwerp firms began cutting based on Morse, who was being highly praised by George Kunz, the well-traveled and influential VP of Tiffany & Company.

In 1899 the rotary saw was developed, allowing two diamonds to be produced from one piece of octahedron. This made the American cutting style even more plausible. Between 1885 and 1902 the number of workers in US cutting factories had grown over 300 percent (though still insignificant compared to the number in Europe). In 1903 a New York jeweler named Wallis Cattelle was one of the first to back up the optical benefits of the American Cuts with ray-tracing, reinforcing the scientific superiority and noting that European cutters were gradually having to conform to it more and more. Merchandisers leaned on the national pride for “American Supremacy,” promoting “American Cut” and “Scientific Cut.” Huge ads featuring eagles, the statue of liberty, baseball diamonds, etc., fanned patriotic flames. The words “brilliancy” and “fire,” some of which included rudimentary ray-tracing diagrams, were related to the cutting of the stone (these ads are reproduced in Gilbertson’s book, which also includes a pull-out display poster produced by J.R. Wood & Sons in 1915).

As we know, history has a way of repeating itself. Just as our trade blurs the lines of “ideal” now, yesterday’s sellers grabbed onto popular buzzwords and abused them. The inability to clearly measure proportions clouded the issue and led to rampant mis-advertising. This reached its height in 1915-1918. The term “American Cut” was diluted by shops setting up in America but not actually cutting to the range Morse and his followers established. Other ad campaigns trumped “scientific” with “best proportions,” “perfect cut,” “top blue white,” and “very fine quality” diamonds offered “below wholesale” (sound familiar?); nowhere near the quality of true American Cut specimens.

The JCK rose to battle this misrepresentation. They organized a movement to remove ads with the word “perfect” and ran a campaign of articles to educate jewelers. They called on Dr. Herbert Whitlock to assist. Whitlock was curator of Minerals and Gems at the New York State Museum (eventually the Smithsonian collection) and provided ray-tracing examples of different cuts. He was the first gemological authority to name the new style “American Cut” in writing. Frank Wade, who was to become a member of GIA’s Student Advisory Board and one of the academic leaders Robert Shipley hired to advance the gemology movement, was also a leader in the crusade. From 1915-1930 Wade pioneered a series of scientific articles that distinguished him in the trade. Marcel Tolkowky’s 1919 book was timed perfectly for his purposes. Wade equated the “American Cut” with Tolkowsky’s calculations and was one of the first influential people to call his measurements “ideal.” By the 1930s the efforts of Wade and Shipley gave Tolkowsky’s book great prominence in the minds of many – and it did have an influence on American cutting: Where Morse’s diamonds had tables near 40% Wade thought Tolkowsky was right and advocated the “ideal” 53 and 54% tables he espoused. Tolkowsky was also the first to write that lower halves needed to have a specific relationship to the rest of the diamond.

As Robert Shipley developed GIA’s coursework in the 1930s he included a survey of cutting styles. By this time the Germans were involved in cutting and, like others in Europe, they did not like the loss of weight on the crown. Shipley’s work, centered on Tolkowksy, was in large part defending against the German concepts. In 1938 the FTC banned use of the word “perfect.” “Scientific cut” fell away because it represented proportions with smaller tables, no longer in use. The terms “ideal” and “American Cut” continued As GIA’s influence grew in the 1930s and 40s an ever-increasing number of jewelers began to recognize the importance of cut quality. Richard Liddicoat worked on cut at the same time he was developing the color and claritygrading system. He introduced a proportions-scope and a grading system using terms like “American Cut” which had deductions for proportions outside a certain range. In fact, the present day Rapaport list is based on the style of the chart Liddicoat developed for color, clarity and cut. In 1953 the GIA diamond grading courses were introduced. With a GIA education a jeweler could make intelligent decisions about buying so these courses caught on like wildfire. Graduates were provided tools to measure cut but often needed help with color and clarity; which were more subjective. This is where the first GIA grading reports came from. Diamonds sent in were graded for color and clarity but not cut, since the students had those tools already.

In the epilogue Mr. Gilbertson writes, “Today when diamonds can be accurately measured to a much higher degree of precision, we find that there is a relatively wide range of appealing proportions…Diamond grading reports that analyze cut merely help the consumer understand the overall grades and appearances that are preferred. We should look at the diamond itself to see if its appearance is what we personally deem the most pleasing to our eyes, making it our own ideal.”

Mr. Gilbertson’s book spans a dynamic period of time in diamond cutting. He has done a superlative job of bringing history to life in an informative and entertaining fashion. His research materials, including 2500 of Henry Morse’s business letters, make for a colorful account and often permit the reader to experience the feelings and passion of his subjects through firsthand quotes. Hundreds of drawings, diagrams and photos make the book user-friendly for all readers. “American Cut – The First 100 Years” will soon be appearing in university libraries across the country, and on countless desktops of diamond professionals and enthusiasts.

Sincere thanks to the Gemological Institute of America, the foremost leader in gemological education, and especially to Al for his passion and commitment.

View an eight-minute synopsis of the book by Inside GIA TV, on YouTube
http://www.youtube.com/watch?v=2kc79FY0Obg