Diamonds are cut and polished to maximize carat weight. By squeezing a deeper cut into the next highest cost bracket, achieves a higher sales price. 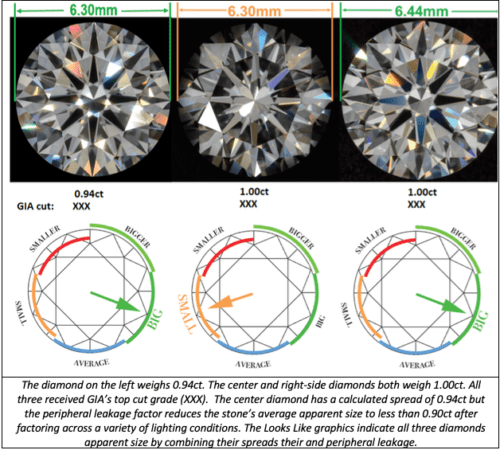 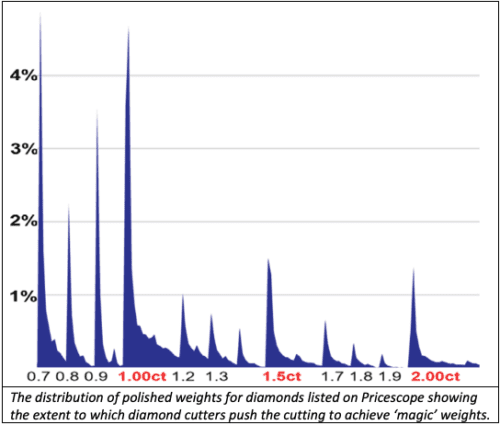 This results in a smaller spread and reduced optical performance, with peripheral light leakage a casualty. Negative spread stones invariably appear smaller than lighter well-cut diamonds with the same spread.

‘Spread’ is a factor that allows comparison of the diameter of a diamond to that having a standard of 6.44mm for a 1.00ct round diamond calculated as:

Sample diamonds were chosen to calibrate the effect of edge or peripheral leakage. Virtual images of the scanned stones were produced using 3D models entered into DiamCalc™ ray tracing software. Images were generated in Cosine lighting; a dark observer head with maximum illumination fading to dark at the horizon with no illumination below the girdle. The black and white images (without dispersion) were generated in face-up and tilted intervals. Pixel intensities were recorded along 360 radial axes and used to determine the brightness or darkness of a diamond’s periphery.

Several thousand such images were created and their peripheral brightness computed. The rounded data from a GIA or AGS report is used to estimate peripheral leakage of a diamond under consideration. This method is less accurate than a real 3D-scanned model.

In addition, a small bonus was added to both HCA and Looks Like results for diamonds with better symmetry and a penalty for stones with worse than “Very Good” symmetry. 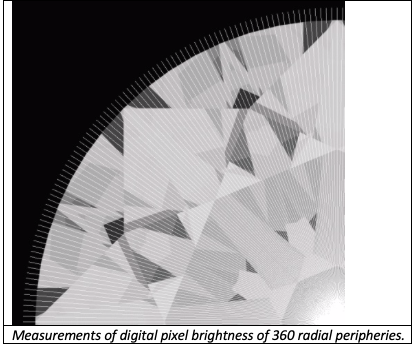 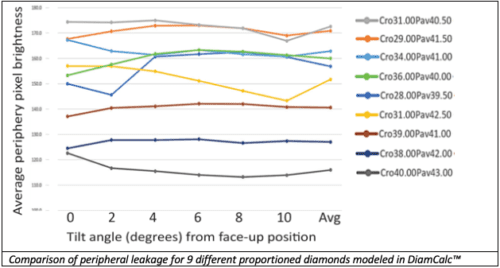 In the future scanned models will enable ‘Looks Like’ size of fancy shape diamonds to be calculated. Most fancy cuts have even worse spread to weight ratios than round diamonds and most have terrible peripheral leakage.

The additional carat weight and dimension report data enable a more accurate spread to be calculated than in the current version of HCA.