who is invited to the shower

I know that the answer to this is that you should only invite people to the shower who will be invited to the wedding, which is why I''m getting a bit stressed over this.

In the church that I grew up in, the women in the congregation traditionally throw wedding showers for girls who are getting married. But I know that I won''t be able to invite them all (probably not ANY) to the wedding because of space constraints.

My Aunts'' (who are also members of the church) idea to remedy the situation is instead of the church committee throwing the shower, they will host it (great!) But they still want to announce it in the church bulletin saying, "A bridal shower will be held for JR320, given by her family on X day at X time in the fellowship hall." And then in their words, "whoever wants to come can come." And then they would just send invitations to people they wanted to invite who would also be invited to the wedding.

I still feel very funny about this. What do you all think.

I also just wanted to say how much I have appreciated all of your help with these things that come up!!! This is a great community.

I have to say that if this is something that is traditionally done in your church and wouldn''t seem odd, then I wouldn''t worry about it. The fact that the church is announcing it as an ''open-invite'' type of thing automatically suggests that, if you come, you probably won''t be coming to the wedding. Why? You''re hardly going to have an ''open-invite'' wedding...LOL!

However, I have to also say that I had never heard of this before except for one other person either here or on another msg board I belong to, mention having a church shower that is open to anyone. Normally, you just invite the women that are invited to your wedding and that''s it. So, again, if this is something that is done in your church, I would NOT stress out over it. If it''s not something that''s typical, however, that''s the part that would make me feel leery. Maybe I''d suggest they not print something in the bulletin? As for the women who are hosting the shower, I think this is their way of being involved and showing they care, even though they know they probably won''t go to the wedding (or maybe even BECAUSE they know they won''t).

Something that struck me as odd, however, was that I received an invitation to a shower from the girl that my FIs former roommate was marrying. I don''t know her at all and I really don''t know him very well (only through FI), and I felt that this was pretty inappropriate to do. I declined, but I felt like - if I went, I wouldn''t know anyone there, and I wouldn''t know the bride, even, and I''d be expected to bring a gift?? It just felt ''wrong'' to me. Then when we attended the wedding and they had their receiving line, my FI went up to the groom and shook hands, etc., and then he was introduced to the bride (he had never met her either) and then I had to introduce MYSELF and explain who I was!!! That I was SO&SOs FIANCE!! Ugh. It made me feel so unimportant and yet I was still expected to give a gift?

I know it wasn''t meant that way at all, but I just wanted to relate that experience so you have something to think about. For me, I''m not sure if I''ll be inviting all the ''females'' from my guest list. If it''s someone I''ve NEVER met and is just the wife/FI of my FIs friend, I think it''s rude to ask them to come and give you something!! Not to mention uncomfortable??!

what with all the shower threads lately, i thought i''d bump this up and see if there were any other responses/ideas. 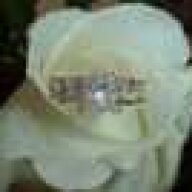 Wow, wonderful gesture BUT only those attending the wedding should be invited.
Maybe if you talk to her? there''s no need to advertise a bridal shower, all kinds of strangers don''t need to know about it you know? I''m sure she will unterstand, if she insists, I would def decline her kind offer.