Wedding gift: taboo to give jewellery? 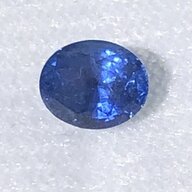 So one of my friends from work (first then at hospital then private practice) that I’ve known for several years is getting married early next year. She got herself an opal ring for engagement and also opal earrings. I also know her fiancé from when all three of us worked at one hospital.

Now I think she seems to be missing a necklace/pendant from opal collection, and I happen to have two small but cute solid black/semi-black opals that I got from Melbourne few years ago. I am thinking of using one of the stones to give to the couple as a wedding present, either as loose stone that she can make a pendant or he can make a ring depending on the choice, or present as a pendant (after conspiring with the fiancé). Now only question is, i heard somewhere that it is considered a taboo or no-no to give jewellery as wedding present unless you are family or relative, especially if the intended recipient is of opposite sex from you. Is there any truth or social taboo on this subject (or it’s okay to give to same sex but not to opposite sex) or total nonsense? There is a less unconventional back-up plan if giving jewellery like earrings or pendants is inappropriate.

"Taboo" seems too strong a word here so instead I'd consider the "appropriateness" of it. While your idea is obviously thoughtful and you already have a suitable gem on hand, imo it's still likely to come across as overly familiar. As your post hints at, I think a man giving a woman jewelry is typically considered a personal gift with romantic overtones, along the same lines as roses, chocolates and perfume, and approaching lingerie. There could always be exceptions but since you are asking here, I think it's safe to say this is not one.

I think that issue remains, whether gifting her the opal alone, having it made into jewelry or trying to pair up with her fiance about it. So, I'd save the opal for use elsewhere and choose a gift that's considered less personal and clearly for both of them, such as a gift card or something from their gift registry. JMHO and good luck.
Last edited: Oct 11, 2021
K

I think this is a very thoughtful gift. Especially since you know both and intend to conspire with the future husband, why not talk about it with him beforehand?

If you'd be uncomfortable talking to him about it you've got your answer. If not I'd hear what he says. Especially because he might already have a necklace in works as a wedding gift to give that day...OR hasn't thought about it at all and thus will be delighted...

Thank you, yeah I wouldn’t have qualms whatsoever about giving it to my cousins for their wedding-after all I am family and knew them first before the hubby, so no weird overture-but with friends it can be awkward. I can bring out choice between two or three gifts when hanging out with both and let them choose maybe…
I’ve been giving chocolates for birthday and other presents forever, both male and female friends!! Oh crap…
S

Well, we all have our different perspectives but what really matters is what you think.

I've gotten creative with wedding gifts a few times and had my feelings hurt a bit when they were not received how I expected.

Once for a wedding I gave a carefully curated stack of books that had helped me and my husband through the years, new ones of course but a copy of our favorite cookbook and a few others that had been especially helpful in our life together. I was excited about my idea because it had that personal touch and was something I would have loved to receive myself. But then I got the feeling that they just thought I was being a know-it-all or something.

Another time, I gave a small antique that I paid a lot more for than I usually pay for wedding gifts just because I thought it was so cool. They were older, second weddings for both and already had all the basics so I thought they'd be very pleased with my special gift. But instead I got hints that they thought I'd just tried to shabbily pass off an old secondhand item on them.

So... now I, personally, just stick to the script and get them a damn air fryer or whatever else is on their registry lol. For some reason, I've found wedding gifts especially not so good for originality. But your mileage my vary (and I hope it does!)
Last edited: Oct 11, 2021
A

Maybe this is a cultural thing, but I haven’t heard of giving jewelry as something weird. It is probably a good idea to present a few ideas - like when you speak to her be like “what would you like as a wedding gift? Something off the registry, cash, or jewelry?” (Phrased less bluntly) and explain your thought process as “you have Opal earrings and ring, I thought maybe a matching pendant”.

Of course it’s simpler to get something off the registry, but I’d give the recipient the chance to weigh in first!
You must log in or register to reply here.
Be a part of the community It's free, join today!
Jewelry Blog