We are getting ready for a severe tropical storm that is right now a typhoon. It was category 5 a couple days ago but by the time it gets to us it will be downgraded. It was looking like an absolute direct hit, but now it looks like it will eye just a few miles to the east. It's still going to be a big deal here though and we live about 100-150 yards from the beach. It's going to be interesting! Flights are being canceled, school starts on thursday and people aren't able to get back after summer vacations in the states and europe. The biggest issue is flooding. These houses are built SO crappy. I have two neighbors who have to move out because every time we get a big rain they end up with 1-3 feet of water in their basements. One is moving TODAY to a new place and one is supposed to arrive TOMORROW (the storm hits tomorrow). Needless to say they are not going to be back in time and it's an absolute certainty they will flood again. Yesterday was gorgeous but the rain started about 2am and is scheduled to continue until wednesday.

I'm hoping we don't lose power. The biggest rain we got 1" of water which isn't much, but add 30-70mph sustained winds and the biggest rain we've ever had here... I don't know... we're bringing everything up from the basement, but I just don't want to deal with it. The people who have had issues with the flooding end up with mosquitoes in their houses and my husband is VERY allergic to them.

I've never been in a hurricane before, and I just have no idea how severe this is going to be. I'm nervous and excited and apprehensive. I love storms and I want to just enjoy it, but that only works if you know nothing is going to happen. At least there are no big trees around our house!

Also, I just don't know how well this part of China is going to cope. It could clog things up for weeks... it's hard to say. I'm hoping they're more prepared than I fear and it will just be a few days to a week...
Sara 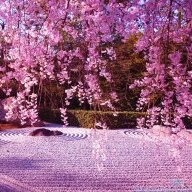 Oh my gosh. How scary. I do hope it downgrades before it comes there. Your a brave one, but to be excited? I am still trying to get used to the thunderstorms here. I do hope you and your family stay safe. Please keep us updated.
...groovy...
..this is my boomstick..
..gimme some sugar, baby..

Hoping everything goes well!! Hopefully the storm won't be as bad as expected and hopefully your area fares better in the aftermath than you expect! Prepare for the worst and hope for the best!

I hope things will turn all right for you. It is very scary. Sending you my best wishes and will pray for you to stay safe.

Gothgrrl|1312687443|2985695 said:
Oh my gosh. How scary. I do hope it downgrades before it comes there. Your a brave one, but to be excited? I am still trying to get used to the thunderstorms here. I do hope you and your family stay safe. Please keep us updated.
Click to expand...

I LOVE thunderstorms... love them... I lived in orlando florida for 6 months 20 years ago and we had them every day and I really liked the daily storms. I also love heavy rains, it's fun to stand in it... I don't know what this is going to be like, and I really don't want anyone hurt or there to be any damage...
Sara

Oh no! Are people evacuating the area? Is there somewhere else you can go until it's safe to return?

No evacuations... there really isn't danger here other than inconvenience. We have a lot of flooding issues and water brings mold. Other than that I think we're safe. It's the inconveniences that are stacking up... and I just don't know how china will handle it. I mean like will there be no milk in the stores for a week? It's all petty in the big scheme, but the house flooding and mold issues have been really bad for some friends. And this is going to be the worst yet. And they're stuck in europe.
Sara

I can imagine what a big inconvenience it would be to deal with flooding and other possible damage. If everyone's okay though, that's the most important thing, and the rest can be dealt with. Stay safe, Sara!

Cehra, that's funny you like to watch the storms. Although I'm getting used to them, I too go outside to watch. Although I watch from my porch. It is neat, but yet scary for me. At least I don't freakout as much as I did when we first moved here. Again, stay safe.

Give us an update!

I've been through plenty of tropical storms and hurricanes, and they can vary a LOT. I think the worst thing will probably be a loss of electricity and the resulting lack of A/C and the contents of your fridge rotting. Ugh! I hate the flooding, because even a few inches will make the ground soupy for weeks. Then it's so hard to make your morning coffee (grind your beans now) but it can be done on a fireplace or sterno can. I needz my coffee, even if it is 92 degrees in the living room!

Do you have a generator?

The worst we had was a category 2 that became a 5 within 4 hours! It was awful. But I think they put in a new computer model that they are using worldwide, and it is amazing. I have been banking on that for a couple of years and it works great.

Most tropical storms are just wind and rain, not a lot of lightning or thunder. Not great to look at, unless you really like wind.

LEt us know how it went!
“Integrity is doing the right thing, even when no one is watching.” ― C.S. Lewis

stay safe and best of luck - dust that you dont get any water!!!

It keeps shifting east! I think it might hit nkorea now! Nkorea is about 120 miles away so we will see. The eye looks like it will hit about 100 miles from us right now, it's still early. Yesterday am it was supposed to make a direct hit right here. The rain has all but stopped, but it isn't supposed to land for another 6-9 hours so we'll see...
Sara

Good luck. Thinking of you and yours.
Marcy
"Life is like an ice cream cone, you have to lick it one day at a time.” Snoopy and others.

The good news is there won't be any flooding around here... but I must admit I'm disappointed. Seriously - it hasn't rained ALL DAY LONG and there is NO wind. I know we dodged the eye by about 100 miles but still, nothing. nada.

I did go to the beach and see some lovely huge (for here) waves today... but umbrellas weren't needed.
Sara

Happy everything turned out OK, even if a bit boring!

Well, I love a good storm too, but not one at the typhoon level. I'm glad it didn't hit and that everyone is safe.
You must log in or register to reply here.
Be a part of the community It's free, join today!
Jewelry Blog