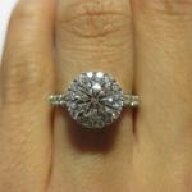 This is what I do on a Sat morning...google diamonds in the news!

Responding to the global recession, the De Beers diamond cartel has cut back production at its South African mines and reduced the price of its rough diamonds between 15 and 20 percent. Even so, industry sources in South Africa are now estimating that diamond prices could fall another "59-63 percent." But the real fear of the diamond cartel is not just that retail prices will decline - it has managed that problem before - but that the public will begin to sell its hoard of diamonds, or what is called at De Beers "the overhang."

At the heart of this concern is the reality that, except for those few stones that have been permanently lost, every diamond that has been found and cut into a gem since the beginning of time still exists today. This enormous inventory, which overhangs the market, is literally in - or on - the public's hands. Some hundred million women wear diamonds, while millions of other people keep them in safe deposit boxes as family heirlooms.

De Beers executives estimate that the public holds more than 500 million carats of gem diamonds, which is more than 50 times the number of gem diamonds produced by the diamond cartel in any given year. The moment a significant portion of the public begins selling diamonds from this prodigious inventory, the cartel would be unable to sustain the price of diamonds, or maintain the illusion that they are such a rare stone that their value is, as the ad slogan claims, "forever."

As Harry Oppenheimer, who headed the cartel for more than a quarter of a century, pointed out, "wide fluctuations in price, which have, rightly or wrongly, been accepted as normal in the case of most raw materials, would be destructive of public confidence in the case of a pure luxury such as gem diamonds, of which large stocks are held in the form of jewelry by the general public."

The genius of the cartel was creating this "confidence" in the myth that the value of diamonds was eternal. In developing a strategy for De Beers in 1952, the advertising agency N.W. Ayer noted in a report to De Beers: "Diamonds do not wear out and are not consumed. New diamonds add to the existing supply in trade channels and in the possession of the public. In our opinion old diamonds are in 'safe hands' only when widely dispersed and held by individuals as cherished possessions valued far above their market price."

In other words, for the diamond illusion to survive, the public must be psychologically inhibited from ever parting with their diamonds. The advertising agency's basic assignment was to make women value diamonds as permanent possessions, not for their actual worth on the market. It set out to accomplish this task by attempting through subtly designed advertisements to foster a sentimental attachment to diamonds that would make it difficult for a woman to give them up. Women were induced to think of diamonds as their "best friends."

This conditioning could not be attained solely by magazine advertisements. The diamond-holding public, which included individuals who inherited diamonds, had to remain convinced that the gems retained their monetary value. If they attempted to take advantage of changing prices, the retail market would be chaotic.

Even during the Great Depression of the 1930s, there was only a limited overhang, since the mass-marketing of diamonds had begun only a single generation before the crash. So even though demand for diamonds almost completely abated, De Beers, by shuttering all its mines and borrowing money to buy up the production of the small number of independent mines that still existed, was able to weather the crisis.

Today, however, with many generations of the diamonds it mass-marketed overhanging the market, and most of global diamond production in independent hands, it no longer is in a position to bring supply and demand into balance. Adding to this precarious situation, diamond cutters, manufacturers and dealers, have, as of Feb. 15, an estimated $40 to $50 billion worth of diamonds in mines in the pipeline that will intensify the downward spiral when the gems reach the market later this year.

If falling prices shatter the carefully nurtured illusion that the value of the glittering stones kept in jewel boxes and vaults is eternal, and the public begins selling even part of its hoard, De Beer's nightmare scenario would come true: The overhang would flood the market.

Edward Jay Epstein is the author of "The Rise and Fall of Diamonds."

Thanks for the interesting article.
I really enjoyed reading that.
It may get more attention on ATW.

I really enjoyed reading that.

It may get more attention on ATW.
Click to expand...

Very interesting! Does that mean I can get my diamond for half off?

That horse is already half out of the barn. I''m seeing quite few large diamonds being resold on other websites, some of which I recognize from here.
"Truth is generally the best vindication against slander - unless it's always being censored"