... well, it wasn''t to propose, unless he wants to put a ring on credit (yuck) or he''s just trying to surprise me really really cleverly (which I don''t think to be the case...)

He got himself a desk, and offered to get me one when we started discussing what to get each other for Christmas. I *love* rolltops, especially antique rolltops, but no true antique rolltop desk will fit a single computer monitor, let alone two (or, well, a laptop and a docking station).

I bought myself a new laptop recently, and a new monitor), and he''s inheriting my old laptop as his own for travel if his job ever requires it. (I use laptops exclusively as I spent three months on the road one year.)

We did have a small amount of talk because of tax time coming up, and the part of the premiums my company is paying for his insurance is taxable income on me. My company''s insurance plan is so good that if he ever needs an MRI, it''ll just be $50 bucks. I''ve had to have just 1 CT scan on an 80/20 plan, my portion was 200. All they offer him is an 80/20 major medical.

However, if we got married, it wouldn''t be taxable income.

I pretty much told him that I love him and I don''t think anything will change between us because of legal status, but there are legal benefits to it. I told him I already considered myself married to him in my heart, and I in no way wanted to sound unromantic or pushy, but that it might save us considerable money "when we get married". Then I said "Heck, we could elope. My mom and her new husband did..."

"But we''re not running away from anyone..."

Then he started talking wedding plans to some degree, at least reaffirming both of our wishes for small weddings. Did not discuss timelines, I said up front it was up to him whenever he decided he was ready. However, he already knows my timeline, and knew it before we started truly dating -- I want to try to have children when I''m 30, and he said he wants to be married before we have children. I still have 3 years before I turn 30. I think that''s enough time, we''ve already been together for two and a half years.

True to our natures of planning all of our purchases in advance, and knowing my fondness of Froogle, he had me pick it out. I found the design I wanted, and found the cheapest one -- saved $700 over the cost of the first time I saw it in the search engines. Pic is attached. (I am SO psyched!!!!)

I hope this means he knows my dislike of surprises and when he does ever propose, he hands me an empty box, says "Will you marry me and pick out the ring?" *grin* (Am I the only LIW who *doesn''t* want the proposal to include the ring?) 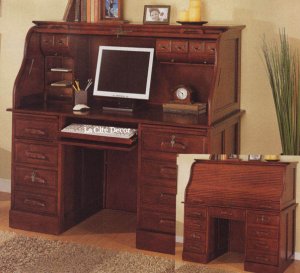 It''s a beautiful desk, kiana. I think it''s great you''re so relaxed about the proposal.
K

Thanks I think so too. His desk arrived this weekend, mine might not make it until Christmas. *le sigh* But the excitement is great!

As far as being relaxed... I''m more relaxed about it now. I still can''t wait to call this wonderful man my husband -- and I''ve mentioned how awkward it is to say a word that shows his relationship to me and our level of commitment right now. "Boyfriend" still feels like someone you knew in high school. "Significant other" is too PC, "domestic partner" is what the IRS will call it (and we''re very, very lucky my company covers domestic partners in this situation)... but I do look forward to being able to say "fiance''" or "husband".

He admitted it''s kind of awkward for him, too.

Talking really helped. Especially when I didn''t mention the "deadline" we agreed on when we got together -- or any talk of timeframe whatsoever. Just the pros and cons -- mainly the pros. I still can''t see any cons, and he really couldn''t say any either.

At least, the talk helped me.

He may still be clueless about how much it means to me -- but I will not force him to ask for my hand, either by subtle manipulation or setting deadlines. This has to come from him, when he''s ready, or it won''t mean what it should. My ex and I were forced by circumstances beyond our control to accelerate marriage, and I really don''t want to make that mistake again.

I love this man too much to rush him. If he wants to marry me, he will ask. If he doesn''t in three years, then we''re likely not meant for each other (although I still can''t see that being the case -- we still say we love each other so many times a day I can''t count it).

Thanks for letting me vent and show off my killer desk!