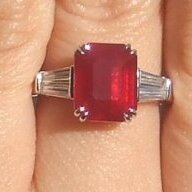 I have been following your story about your how your new bf brought you to his family in LA.. and how your bf than ask you "so if I asked you to marry me right now would you?" at an engagement party.. Did he finally popped the question to you? I would really really want to know wat happaned. 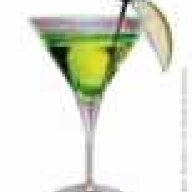 Me too! I was just thinking about you the other day. Give us some updates!
S

Oh my gosh hi you guys! I haven''t been around in sooooooooooo long but I constantly think about coming back to update but have been pretty busy. I have a cold and couldn''t sleep so I thought I''d just check on here to see what was up and wow, so many new faces & engagements, how wonderful!!!

Gosh, how to make a long story short? Let''s see, J and I are now living in the wonderful city of DC. Ironically it is where my ex-FI now lives with his new gf. We still keep in touch on occasion and next weekend we''re all supposed to go out to dinner together in town. Is that weird do you think? We''ve always maintained a friendship but all my friends seem to think it''ll be really weird going out on a double date so to speak.

It''s quite a change from Manhattan which I totally miss. We go back to the city about once a month though for J''s work. He kept his place in the city so at least we don''t have to stay in a hotel each and every time. It''s weird though that I''m not a New Yorker anymore...!

My friend Jenna, remember her? She''s the one who was mislead by her ex-BF into thinking her ering was a real diamond and not a fake (which would of been fine had he come clean with her but he was also a real slimy character in general). Well she is married and pregnant! She''d only been dating this guy for a couple of months and they just knew. He is an awesome guy and I think they''ll last. He said as soon as he saw her he just knew she was the one. So sweet!

I''m not engaged, not yet anyway. The crazy thing is that I don''t mind either. I''m perfectly happy and content to enjoy my life right now and not worry about what''s next for J and I. I know we are meant to be and if it happens it happens. We''ve talked about it on occasion (he always brings it up). I think he finds it odd that I''m not all over him as to what the deal is with us. I know he wants get married one day and that he knows I am the one. That''s good enough for me! Well, at least for now anyway! Although sometimes I wonder if he''s thinking about proposing within the year. About a month ago we went to LA to visit his parents. His mom and sister took me shopping and somehow we ended up in one of those high end jewerly stores on Rodeo. Sad that I wasn''t even paying attention to which one! His mom claimed she had to pick up something but funny how she never actually did. When we went inside I was content to hang out and look at all the goregous necklaces and all but his sister kinda ''led'' me over to the ering and diamond selections. She kept saying that she loved diamonds and how she can''t wait to get engaged (which was news to me because we''ve become pretty good friends and I''d never heard her mention it before!). Anyway, she asked me what type of diamond was my favorite and all. It was really odd but at the time I didn''t think anything of it. It wasn''t until we were out that night with everyone for dinner and his sister was talking about what we did that day. I remembered his mom hadn''t picked up what she was going to pick up at the jewlers and said "You forgot to pick up the necklace!!!", if you would of seen the look that passed between her and her daughter and then at J you would of been like hmmmmmmm, something is up. She came up with some vague excuse that it wasn''t ready but I don''t ever recall her asking a single person anything as she was wth us the entire time.

So what do you guys think?


How is everyone anyway??? I miss posting here!!!!

Wow I remember the fake diamond story, that is really cool, very happy for your friend.

The other sounds like a plan to me, he''s probably going to propose within the next 6 months!

you guys are so going to be engaged soon! That trip to the jewellery shop is hilarious! They were so trying to see which ring was your favorite! Im delighted that its going well for you and thrilled for your friend too. Dying to see the ring when you get engaged

Date: 1/20/2007 11:37:23 AM
Author: bee*
you guys are so going to be engaged soon! That trip to the jewellery shop is hilarious! They were so trying to see which ring was your favorite! Im delighted that its going well for you and thrilled for your friend too. Dying to see the ring when you get engaged
Click to expand...

Yah, I agree with bee.. I just know you are gotta get engaged soon! I would really wanna see you ring..