"Sorry we missed you!"

As I was driving into the complex today after work, I saw a Post Office Jeep/Truck thingy leaving. When I walked up to the door of our house, I saw it: the note saying our wedding DVD had arrived, and I *just* missed it!

Now I have to wait until tomorrow to get it! Grr!!

At least they''re open til 7pm, so I won''t have to leave work early to get it. That''d be a hard thing to finagle; I''ve only been there since February 1.

Yay! Our DVD is ready and waiting.

Boo! We have to wait until tomorrow night to watch it!

Fisher, well, now you have something to look forward to! I''m sure it will be so much fun to watch. Very exciting!

Hate when that happens!! But that gives you time to get the popcorn popped and the drinks poured for tomorrow!

I picked it up today after work, but I''m waiting until Paul gets home to watch it.

I couldn''t resist opening the package without him, though. I *thought* I knew what was inside.

There were three copies of the DVD in the box! His cousin owns a video business, and they decided to sweeten the deal by including two extra copies! Yay! We have a "footage" DVD with our copy, too. I''m so excited to watch it!!

Here''s hoping test grading goes quickly for my boy!!! I can''t wait for him to get home.

How nice of them to include extra copies...I''m sure the parents would love a copy...!!

My mom is crazy thrilled!!!!

I''m sure his parents will be, too. But my mom tends to be as much of a spaz about these things as I am. It''s genetic!

Yay! How special. I wish we could afford a videographer!

Anchor, we never would have gotten a video, had Paul''s cousin not owned a company. His parents'' paid for it, and then his cousin "upped" the deal by adding more angles, and by adding in two copies of the DVD.

Paul''s working extra, extra late tonight. The ScanTron machine jacked up, so he''s stressing out to get all the grades in the computer before he comes home. I can''t wait to see the video. It''s not in a wrapper, so he''d never know if I sneaked a peek!

The pill''s really helped in that area, though, I must say. 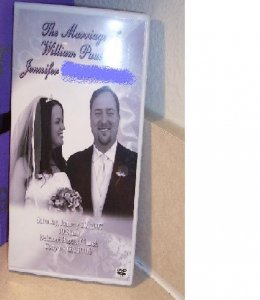 well how was it fisher?

The extra footage DVD is basically just a running stream of everything any of the cameras picked up, and that''s hilarious, because it jumps around so much as they move locations and stuff. There''s also the fact that Paul had a mic *a live mic* up until we did our pictures, and I got to hear him talking to his dad just minutes before the wedding, and our first words to each other as a married couple are on there, too. He said, "hey baby. You look great. I mean GRRREAT." Heehee. I remember that, but it''s good to hear it again and again, too. Then we said husband and wife WAY too many times and stuff like that, but you can''t see us at all. It''s just a stream of our conversation as people walk out of the wedding and head to the reception. It''s hilarious.

So yeah, it was fun. We didn''t finish all of the footage, there were 4 tapes of us that got condensed into one, so maybe we''ll do the rest tonight.

It''s funny how much we''d forgotten from the wedding, and it was only 3 weeks and some odd days ago.

Anyway, it was GREAT! They did a lot of cool effects and it''s just sweet!!

It''s so precious fisher! I''m glad it was good.

Glad you enjoyed it!!