So I got some sad news, and good news today. Sadly, Hal asked his mother for the ring and she said no.

She explained to him that his aunt should have never given him the ring in the first place, that it should have gone to a female heir in the family. That one day if he were to have a daughter, that is who will get the ring. Bla bla bla. Hal, knowing how much history and fighting there is between his mother and her sister, took this all in stride.

So, he then tells me that his tax return will be the first big chunk he is going to start saving to buy me a ring.

He knows I want a diamond, although I did mention that people get sapphires and other precious gems these days due to money. He told me he wants to make me happy, but that he is not a rich man, to which I laughed hysterically! So tentatively, we are going to look some together in April, and I can send him photos of things I like so he can start to get an idea.

I was really sad to start with, but the more I let it all settle in, the happier I am with the idea. After all, I was embarrassed to admit I was scared it might be a cut that I really didn''t like! He is happy because it feels like it will really come from him and his heart too. And I think he is really going to get a sense of accomplishment from picking and purchasing it himself. In the end, I know I am going to love it no matter what, because it is coming from my true love.

Glad to hear your sad news turned into good news! Personally, I''d feel the same way...unless it was an heirloom from MY family, I just don''t think like it''d ever really feel like MINE, you know? I think it really will feel so much more special coming from him. Can''t wait to hear about your shopping trips next month!

w00t! now you can pick out something perfect!

yay for things working out for the best. 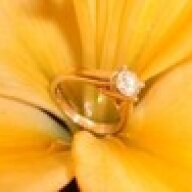 I''m glad you were able to look on the bright side of things.. I know that if my bf was going to give me a ring that was in his family, his mother would give me guilt about having the dang thing in the first place and the whole family would have some sort of strange "claim" on my engagement ring. Not good!!
Now you can have your own personal tastes in a ring that you will have for the rest of your life... and if you wish, YOU can pass it on to your children one day!
Congrats to you and your man! Keep us posted on the ring searching.

_-_-_"The irony of commitment is that it’s deeply liberating - in work, in play, in love. The act frees you from the tyranny of your internal critic, from the fear that likes to dress itself up and parade around as rational hesitation. To commit is to remove your head as the barrier to your life."_-_-_

-And I Don't Want to Miss a Thing-

Hmmm....I got a gemstone ring, but it wasn''t entirely due to money. I wanted a gemstone.

Thanks ladies! I am definitely beginning to see things this way after 1 day of looking! I have to start looking all over again, although some of my favorite styles from a while ago are still up there in the running. I am considering getting a white or colored sapphire for now, so I can get the ering setting that I love. Because, GASP..... he said that magic phrase............ "Honey, we can always upgrade later"

So, I will perhaps have to start a thread on my thoughts, hehehehe

Great news, now come on over to colored stones. Everyone would love to help you find a stone that makes your heart sing. Just know that a good sapphire can be more expensive than a diamond.

Well at least this one will be completely your ring now that you can design. Have fun with it!

well said! Best wishes... this will be fun!

Precisely! And keep us up to date on all your decisions about settings and stones!

Date: 3/26/2009 9:15:32 AM
Author: swimmer
Great news, now come on over to colored stones. Everyone would love to help you find a stone that makes your heart sing. Just know that a good sapphire can be more expensive than a diamond.
Click to expand...

And to back up Freke (hi Freke!

): some of us choose a coloured stone because that is our preference. In fact, some of us are 'diamond snobs'

Have a look in our eyecandy thread and you will see colours and shapes that knock your socks off! And the best part? EVERY ONE our our pieces is unique.

CONGRATULATIONS on how it's all worked itself out. I hope you find exactly the ring of your dreams!

I have a blue zircon mounted in a halo necklace actually. I got the stone from Precision Gems. And it is a pentagon and SOOOOO unique! I love it. So I know a little about colored stones. But I had no idea they could be more expensive! Eek! 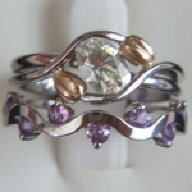 I love your optimism! Can''t wait to see your ring of your dreams

Date: 3/26/2009 3:49:23 PM
Author: ilovesparkles
I have a blue zircon mounted in a halo necklace actually. I got the stone from Precision Gems. And it is a pentagon and SOOOOO unique! I love it. So I know a little about colored stones. But I had no idea they could be more expensive! Eek!

I should probably clarify: not all are a gazillion dollars...but some stones in some colours can be more expensive than the white blingy stuff

But you are spot on as far as them being unique!