The name was chosen as a tribute to the Canadian Armed Forces. It comes from Juno Beach where hundreds of Canadian soldiers were killed or wounded during the June 1944 D-Day invasion of German-occupied France during the Second World War.

"We are proud and happy to adopt Juno to the army today, and to promote her immediately to the rank of private," said Brigadier General David Patterson.

"Polar bears are brave, strong, resilient, tenacious, agile and more than capable of defending themselves, just like our Canadian soldiers," said Patterson.

Aurora, Juno's mother, gave birth to two cubs November 11, 2015, but only one survived.

Our Army is competent and adorable! 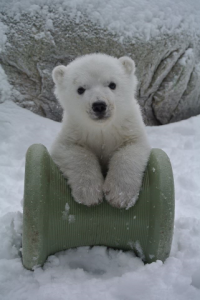 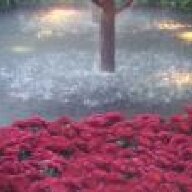 Totally adorable! Thank you for sharing.

Polar bears and beluga whales have always been 2 of my favorite creatures.

Polar bears and beluga whales have always been 2 of my favorite creatures.

I'll tell the Navy to be on the lookout for a baby beluga needing adoption!

You're right, beluga whales are so cute!
"We can complain because rose bushes have thorns, or rejoice because thorn bushes have roses." Abraham Lincoln

If my memory cells are working properly (big IF!), I think you once posted that you like polar bears.

I'm trying to post another picture of Juno using 'screen shot', but can't recall how I've done that in the past.

Waiter! More coffee for my sleepy brain!
"We can complain because rose bushes have thorns, or rejoice because thorn bushes have roses." Abraham Lincoln

Another one of Juno. 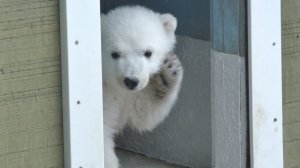 Juno could beat Hillary AND Trump!

We brain-dead American vote for stupider stuff than looks.
"Everyone's entitled to their own opinion, but not to their own facts." - Daniel Patrick Moynihan

Juno has looks and is athletic!

Can she run for President even though she was born in Canada?

Hasn't the whole 'Canadian running for US President' been in the news lately. 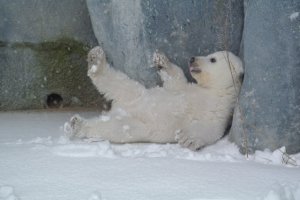 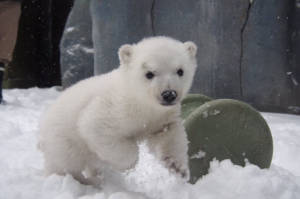 Oh my gosh, isnt she the cutest? I'd vote for her...but yeah, the Canadian born thing might be an issue!
~~~Thanks to PS, my wants far exceed my budget!~~~

I LOVE polar bears, and Juno is the cutest! Thanks for posting!

Treat every life situation like a dog: if you can't play with it, eat it, or hump it, p1$$ on it and walk away.

OMG so adorable and precious and you have done it again December Fire. I am completely in love.

Better than bling! And I third the vote Juno for President!

Running on the cold furry party ticket.
“Until one has loved an animal, a part of one's soul remains unawakened.”
― Anatole France

She's so adorable! That face is too sweet!

Thank you for sharing this!