Painted in 1939- does it remind anyone of anyone? 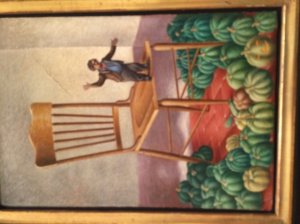 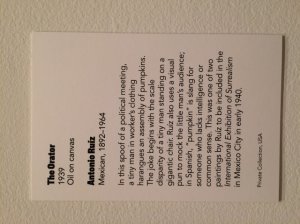 "I never met a diamond I didn't like."
No jewel is as beautiful as a cat's eyes.
Madam Bijoux (Gabrielle)

I love it when artists take risks. I wonder if at the time, he took heat for his painting or if it was at all controversial?

That was a year of huge turmoil worldwide. It was the year that World War II started for most of Europe. (Czechoslovakia and Austria may feel that it started a bit earlier.) Germany invaded Poland on September 1 of that year and Russia then invaded Poland from its other side. England and France quickly declared war upon Germany after that. Meanwhile the Spanish Civil War was just winding up. I am unfamiliar with Ruiz (although I could, of course, look him up.) But I am fairly sure that he was protesting either a specific or generic fascist with that orator. Although he is not depicted as a military man, I suspect he is Franco, Mussolini, and/or Hitler.

Madam Bijoux, what do you have to tell us? I won't cheat and look it up. And, yes, he does remind me of Trump.