After I received the engagement ring from Mark T of ERD, I went ahead and planned the proposal. Here’s the link to my wonderful experience with Mark T.
My ERD Testimonial

My Fiance and I have been together for 4 years and have been living together in the past two years. I knew that she is hoping to get engaged this year but I think she was expecting for it to happen later this year during our annual summer destination vacation.

I had two months to prepare and my initial idea is to take my FI to a romantic weekend getaway in a Bed & Breakfast inn somewhere upstate in NY or Connecticut ( We are from Staten Island, NY). Since I was planning on proposing during the Memorial Day Weekend, most of the places (especially the romantic ones) were fully booked. I then decided to reserve a terrace suite at the W. Hotel in Manhattan. We usually go there for our yearly anniversary so I was hoping she will not suspect that I will be proposing then.

I worked with the head concierge of the W Hotel, Renee and she was instrumental in setting up the terrace suite for the proposal. I initially hesitated in proposing in a hotel room since it sounded a bit cheesy but Renee assured me that it would come out great.

The day started by driving in the city and we checked in a “small” room so that my Fiancee will not suspect anything. We then had a Bliss Spa massage which was inside the W. hotel. We usually do this for our anniversary. Afterwards, we walked around the city and we were fortunate enough that they were having a street fair in front of the hotel. In the meantime, I had the ring in my pocket wrapped in microfiber and duct-taped inside my cargo shorts. I kept on grabbing my side pocket every few minutes since I was paranoid that I might lose it. At some point, she probably thought that I had a rash in my leg since I looked like I kept on scratching my side.

Next, I took her to Michael C Fina & Tiffany’s to throw her off. She indicated that she wanted a halo setting with a cushion cut so I showed her the Tacori settings at Michael C Fina’s and she really liked the way it looked. We then walked to Tiffany’s since she initially like the Novo but she also realized how overpriced Tiffany’s was. I felt so bad after leaving Tiffany since she posted in her facebook wall that she just got teased again. On the flip side, I knew she is definitely in for the surprise and she has no idea that it’s actually happening that night.

We then went back to the hotel room to get ready for dinner. I had to pretend that I was going to complain about the room since we should have gotten an upgrade. I then told her that I complained at the front desk and we got an upgraded room. I suggested that we should pack our bags before going to dinner and the hotel will move it to a nicer room when we come back.

I took her to dinner at the Gotham Bar & Grill. We had a wonderful dinner. Unfortunately, the concierge texted me and indicated that she needed more time to prepare the terrace suite for the proposal and that I need to kill time. I already had quite a few drinks and was fully stuffed. I think I had 3 cups of coffee and had to keep on going to the bathroom in order to text Renee back and forth. My fiance thought I was having stomach issues since I kept on leaving the table (haa haa!). We then walked around Union Square and took a cab back to the hotel.

When we got in the hotel lobby, I told my FI to wait in the lounge area since I pretended that I forgot my phone charger in the old room. In reality, I went up to the terrace suite where Renee was waiting for me. She set up the room so beautifully. As soon as you walk in, there’s a path of rose petals and LED candles leading out to the terrace where I will be standing. We are both “How I Met Your Mother” show fans so I copied the idea from someone in this forum about having yellow umbrellas. I left one umbrella by the entrance for her while I was holding one as well with the ring. I also made a romantic CD that was playing. We were fortunate that there were speakers outside as well.

So I called my FI in the lobby and told her that I’m already in the new room. I asked her to just go my the front desk and ask for a key. While I was waiting for her to come up, I finally started feeling the jitters. I must admit that I was pretty cool about the entire thing during most of the day. But by this time, I really started sweating and was almost in a panic that I was going to forget what I want to say to her when she walks in. When she walked in, I was able to compose myself and was able to deliver what I wanted to say to her. The funniest part is that after I was done with my speech and she said yes, I slipped the ring in the wrong hand. She was like, “I think it’s in the wrong hand”. Haa haa... Ooops. We both laughed, drank and danced through the night in the terrace.

The following day, I arranged brunch in the terrace and we took a few pics. We were so fortunate to get this beautiful terrace suite. I only reserved for a junior suite and the concierge upgraded us with this awesome presidential suite for free. I can’t thank Renee enough for all of her help since she has made my proposal such a memorable one. 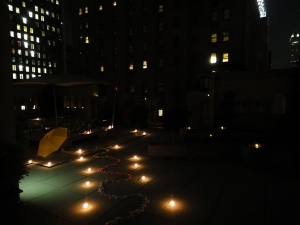 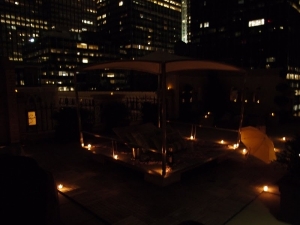 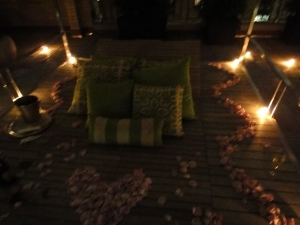 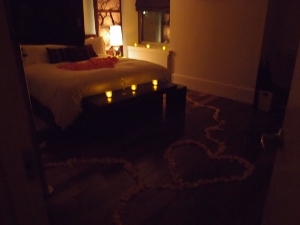 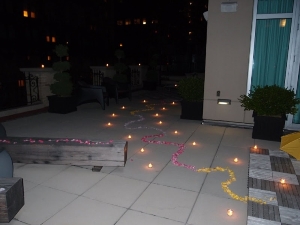 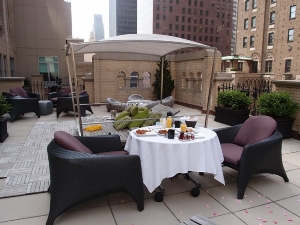 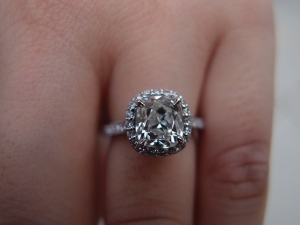 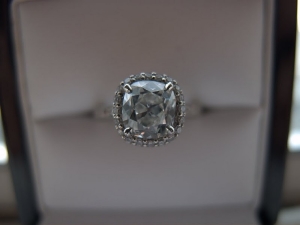 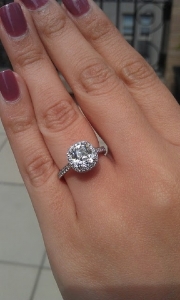 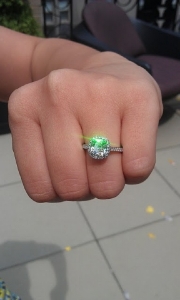 Fantastic. Well-executed. I can only imagine the relief you felt when you were able to pull it off with only one minor hitch. Job well done!
A

Thanks Rock. You did an amazing job as well. Your FI's ring is awesome. If I recall correctly, I think we were in the same time frame of shopping around for the ring. 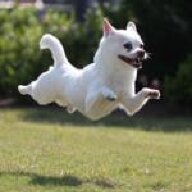 Beautiful ring! Beautiful proposal! You did a wonderful job. What a lucky girl!

"A good marriage is one which allows for change and growth in the individuals and in the way they express their love."
L

ohh that is so sweet and thoughtful congratulations!
slg47
H

what hotel is this? i am trying to find a hotel with a terrace, but they are very hard to find
A

It was at the W. Hotel Midtown. You can contact "Insider Renee" from their main line. She was such a great help.