Memorial Day (originally Decoration Day) is May 30 and will be observed this year on Monday, May 30.

I thought it would be nice to have a thread for information about Memorial Day -- the history, what your community does, pictures, poems, whatever.


Remember to fly your flags at half staff until noon and then raise to full staff to sunset!


The 30th day of May, 1868, is designated for the purpose of strewing with flowers or otherwise decorating the graves of comrades who died in defense of their country during the late rebellion, and whose bodies now lie in almost every city, village, and hamlet church-yard in the land. In this observance no form of ceremony is prescribed, but posts and comrades will in their own way arrange such fitting services and testimonials of respect as circumstances may permit.
We are organized, comrades, as our regulations tell us, for the purpose among other things, "of preserving and strengthening those kind and fraternal feelings which have bound together the soldiers, sailors, and marines who united to suppress the late rebellion." What can aid more to assure this result than cherishing tenderly the memory of our heroic dead, who made their breasts a barricade between our country and its foes? Their soldier lives were the reveille of freedom to a race in chains, and their deaths the tattoo of rebellious tyranny in arms. We should guard their graves with sacred vigilance. All that the consecrated wealth and taste of the nation can add to their adornment and security is but a fitting tribute to the memory of her slain defenders. Let no wanton foot tread rudely on such hallowed grounds. Let pleasant paths invite the coming and going of reverent visitors and fond mourners. Let no vandalism of avarice or neglect, no ravages of time testify to the present or to the coming generations that we have forgotten as a people the cost of a free and undivided republic.

If other eyes grow dull, other hands slack, and other hearts cold in the solemn trust, ours shall keep it well as long as the light and warmth of life remain to us.

Let us, then, at the time appointed gather around their sacred remains and garland the passionless mounds above them with the choicest flowers of spring-time; let us raise above them the dear old flag they saved from hishonor; let us in this solemn presence renew our pledges to aid and assist those whom they have left among us a sacred charge upon a nation's gratitude, the soldier's and sailor's widow and orphan.


It is the purpose of the Commander-in-Chief to inaugurate this observance with the hope that it will be kept up from year to year, while a survivor of the war remains to honor the memory of his departed comrades. He earnestly desires the public press to lend its friendly aid in bringing to the notice of comrades in all parts of the country in time for simultaneous compliance therewith.

Department commanders will use efforts to make this order effective.
By order of

Twenty One Steps
(By Thomas Holmquist)

The rank and file in North and South
Believed their cause was just;
We find upon each battle flag
Inscribed, "In God We Trust;"
And in this sunny land of ours,
Now sleeping side by side,
The Union Blue and Southern Gray
Lie buried where they died.

Since we have come to scatter flowers
This consecrated day,
We cannot cherish bitter thoughts
Toward those who wore the "Gray;"
Believing that their cause was right,
Freely their blood they shed;
Then, let us strew-alike-the graves
Of all our sacred dead.

And those who for the Union fought,
In scattering flowers to-day
On heroes' graves, would never dream
Of passing by the gray;
And heroes of the "Southern Cause,"
In paying homage true,
Will not forget the graves of those
Who wore the Union Blue.

Thrice welcome, then, this sacred day.
That binds our hearts anew;
Our country undivided stands,
For all-now love the Blue;
On resurrection day,
Linked arm in arm, we'll find the boys
Who wore the Blue and Gray.

The Last Mile
By: Iain Sherwood

I walked the last mile with my brother today
In the garden of stone.
On a caisson drawn by horses gray
He rode alone.
Drum beats echoed hollow in the air
As iron shod hooves rang on the pavement.
A platoon his escort
To take him home in Arlington,
Where a century of heroes lie row on row
Their duty done.

The Honor Guard carried him lovingly
For brother he is to all those there interred.
Amid presidents, astronauts, explorers and heroes
He takes a place well deserved.
The prayers are said; the volleys fired
And the flag is folded
Carefully, never again to be unfurled.
Rest well, weary soldier, now and forever;
The Corps has called you home.
Rest well, my brother.

Iain Sherwood, September 19, 2002, MacLean, Virginia
I wrote this the day we buried my brother, Captain Charles Sherwood III, on his birthday, at Arlington.

The history behind "In Flanders Fields":

McCrae's "In Flanders Fields" remains to this day one of the most memorable war poems ever written. It is a lasting legacy of the terrible battle in the Ypres salient in the spring of 1915. Here is the story of the making of that poem:
Although he had been a doctor for years and had served in the South African War, it was impossible to get used to the suffering, the screams, and the blood here, and Major John McCrae had seen and heard enough in his dressing station to last him a lifetime.

As a surgeon attached to the 1st Field Artillery Brigade, Major McCrae, who had joined the McGill faculty in 1900 after graduating from the University of Toronto, had spent seventeen days treating injured men -- Canadians, British, Indians, French, and Germans -- in the Ypres salient.

It had been an ordeal that he had hardly thought possible. McCrae later wrote of it:

"I wish I could embody on paper some of the varied sensations of that seventeen days... Seventeen days of Hades! At the end of the first day if anyone had told us we had to spend seventeen days there, we would have folded our hands and said it could not have been done."

One death particularly affected McCrae. A young friend and former student, Lieut. Alexis Helmer of Ottawa, had been killed by a shell burst on 2 May 1915. Lieutenant Helmer was buried later that day in the little cemetery outside McCrae's dressing station, and McCrae had performed the funeral ceremony in the absence of the chaplain.

The next day, sitting on the back of an ambulance parked near the dressing station beside the Canal de l'Yser, just a few hundred yards north of Ypres, McCrae vented his anguish by composing a poem. The major was no stranger to writing, having authored several medical texts besides dabbling in poetry.

In the nearby cemetery, McCrae could see the wild poppies that sprang up in the ditches in that part of Europe, and he spent twenty minutes of precious rest time scribbling fifteen lines of verse in a notebook.

A young soldier watched him write it. Cyril Allinson, a twenty-two year old sergeant-major, was delivering mail that day when he spotted McCrae. The major looked up as Allinson approached, then went on writing while the sergeant-major stood there quietly. "His face was very tired but calm as we wrote," Allinson recalled. "He looked around from time to time, his eyes straying to Helmer's grave."

When McCrae finished five minutes later, he took his mail from Allinson and, without saying a word, handed his pad to the young NCO. Allinson was moved by what he read:

In fact, it was very nearly not published. Dissatisfied with it, McCrae tossed the poem away, but a fellow officer retrieved it and sent it to newspapers in England. The Spectator, in London, rejected it, but Punch published it on 8 December 1915.


In Flanders Fields the poppies blow
Between the crosses row on row,
That mark our place; and in the sky
The larks, still bravely singing, fly
Scarce heard amid the guns below.

We are the Dead. Short days ago
We lived, felt dawn, saw sunset glow,
Loved and were loved, and now we lie
In Flanders fields.

Take up our quarrel with the foe:
To you from failing hands we throw
The torch; be yours to hold it high.
If ye break faith with us who die
We shall not sleep, though poppies grow
In Flanders fields. 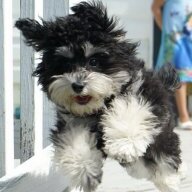 Thanks for starting this thread TooPatient. As we get caught up in travel and BBQs, it's easy to forget what Memorial Day is about. I know I sure needed the reminder.

The memorial built in my home town. This was organized by a wonderful veteran who made a promise to a fellow soldier who never came home. I was priveleged to help with the construction of this and hear a few of this wonderful man's memories.


ETA: It isn't very clear in the picture -- on the center pole is the American flag and the MIA/POW flag. Surrounding them are the flags from each branch of the military. 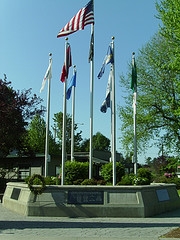