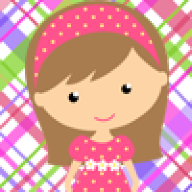 I have a canon eos rebel xsi with just the basic kit lens? Does anyone have any suggestions for what lens or lenses I should get? I want to take macro shots of my jewelry--I am new to that so no need for the very best, and I also would like to take better portrait pictures of my kids and pets--all of whom move at lightning speed. Would there be two lenses or one combo lenses that would serve these purposes?

Thanks so much to all you camera experts-- the pictures on pricescope are just phenomenal!! 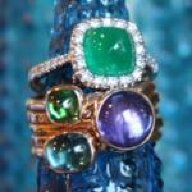 I have a Canon Rebel XSi too. Do you have a budget in mind?

Canon makes 6 macro lenses.
http://usa.canon.com/cusa/consumer/products/cameras/ef_lens_lineup
I'd recommend the $1579 one.
It allows you to be as far away from the gem as possible so you can get light into the gem; also you'll get less of that big black blob (the lens) reflecting visibly in the gem.

If that's too expensive I'd get the 100mm for $599.
IMHO you don't need the 100mm $1049 IS (image stabilization) lens for macro work since you not going to hand hold your camera.
In fact you should buy the heaviest tripod you can afford.
Macro photographers are even known to hang bricks from the middle pole of their tripod (many models have a hook for this) to make it even more stable.

But again, if you really get into macro work you will lust after that 180mm lens.
Many people start out buying the cheaper gear and trade up, which makes lots of money go POOF compared to if you would have just bought your last lens first.

Also stack together a few extension rings from Canon for even more enlargement.
Since they have no glass they do not degrade the image like those screw-on lenses can.
Also, having no glass makes them cheaper than lenses; they just move the lens away from the body and transfer info between the lens and the body.
Check for compatibility though. 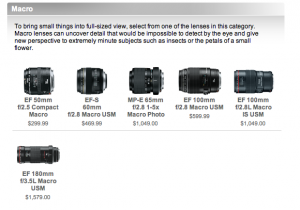 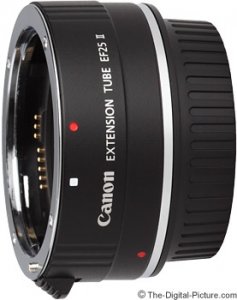 kenny|1306448414|2931184 said:
If that's too expensive I'd get the 100mm for $599.
You don't need IS or image stabilization for macro work since you not going to had hold this.
In fact you should use on the heaviest tripod you can afford then hang bricks from the middle of it to make it even more stable.
Click to expand...

Yep, this is the one I was going to recommend. http://usa.canon.com/cusa/consumer/products/cameras/ef_lens_lineup/ef_100mm_f_2_8_macro_usm#Features

Also read Ken Rockwell reviews of Canon lenses and lenses that will fit on a Canon body ...

http://www.kenrockwell.com/canon/lenses/index.htm
"Everyone's entitled to their own opinion, but not to their own facts." - Daniel Patrick Moynihan

thanks Kenny and Burberrygirl-- i usually kind of go mid of the road on purchases, so that lens looks about right.
You must log in or register to reply here.
Be a part of the community It's free, join today!
Jewelry Blog