I''m heading down to Toronto tomorrow to do some shopping, and I''d like to exploit this opportunity to look at diamonds get a better idea of what carat size of stone I''d eventually like. I had originally wanted something in the .50-.75 range, but thanks to the sparklies of PS, I''m considering a (slightly) larger size. I would like to actually try on some rings, but I''m not sure if store carry display models in size 7?

So, are there any jewelery stores that are easily accessible by metro in Toronto? I''m imagining that there might be some in the larger mauls that are connected to the subway system, but wondered if anyone had any suggestions.

FF has assured me that we will a) get engaged in person, b) it will not be the same day I marry him, and c) it won''t be on our anniversary on New Year''s Eve. By elimination, this means it will happen during our spring break visit, and he has confirmed that''s when he was planning on doing it. Yes! 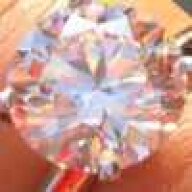 I am too late in seeing your post Gal, but next time you go downtown TO, head to Bay and Bloor and go to Tiffany''s, Cartier, and try on lots of rings. I went to Tiffany''s a couple of years ago and tried on 2, 3, 4, 5, and 6 carat rings! Oh what fun it was

There are lots of stones smaller than that too, which are more realistic of course, and would give you a better idea of what you want.
"The greatest obstacle to discovery is not ignorance - it is the illusion of knowledge." - Daniel Boorstin

and there are great little shops in yorkville.....cumberland stop.

while i''m not from toronto, we go to tiff every september and have gotten to know the metro system quite well. some great stuff in Birks this past september.....

Dang, why didn''t I think of that?

Well, thanks to the logistics, I only ended up stopping at one maul store in the Eaton''s Centre because it was conveniently attached to the bus terminal. I got lost in there, of course (I''ve never been in it before) and was running out of time, so I zipped into the only one I''d found by wandering around. It was Peoples. I can''t believe how hideous their catalogue is! It''s the worst combinations of two-tone metal I have ever seen!

I didn''t get to try on any of the rings because the sales girl got snippy with me when my puffy fingers (I had just spent my time running around Eaton''s in a pashima! I was seriously overheated.) wouldn''t let the size 7 glide on.

So I just had to stick it beside my finger, which doesn''t do the trick at all.

What surprised me what how huge even the .75 looked, not to mention the 1ct. I probed for a while and found out the cut was ''good'' and that it was ''high clarity'' because it was an ''I4300''. I eyeballed what I think she said was an I2 and it looked very specklely indeed. I wonder if the poor cut of these stones has been translated into size?

I was suspicious of how big they looked. They have got to be using a poorer cut to increase the diameter ... ?