Is anyone here a 3 dog family?

My husband and I are childless aside from our two male Chihuahua''s. They are the center of our lives, and we adore them...and because we love them so much, it''s easy to see how much more love a third could add!

We''re currently thinking about getting a female Chihuahua puppy...and I want to know from any other 3 dog families...what is it like? Is adding a 3rd harder/easier/the same as adding the 2nd? Any regrets?

We are a zero dog family, but the neighbors on three sides of us are all 3 dog families. All I want to say is, please try to keep the barking down and to be good neighbors.
****** Life is a Journey, not a Destination. ******

I have three dogs, two greyhounds and one large beagle-ish mix. I had 2 dogs for a long time and then decided to get the third after a few years. I have to say that I didn''t think it would be a big deal adding just one more dog but it did indeed change things up quite a bit. Walking 3 dogs is a lot harder than walking 2, though your dogs are much smaller than mine. The house seems much smaller with 3 dogs too and sometimes it seems that there is a dog everywhere I look. I love my babies dearly and since we are also a childless couple, they are indeed my children. But in retrospect, I may have just stuck with the 2. 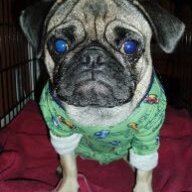 For a few years now we have had three pugs. We started with one and right away we knew we wanted another. Then a couple years later we ended up with a third. I didn''t think there would be any difference in adding the third, but it is a little different. Walks can be ummmm.... interesting sometimes. Of course then there is the cost of food, toys, vet bills, etc. But we knew all this going into it and though I do see a small difference between having two and three, I wouldn''t change it for the world. We love them all! But I think three is the max that our family could handle. This is definitely a big decision though so take your time in deciding what would be right for you. Good luck!
L

We are a 3 dog family since we adopted our chihuahua 2 months ago. Three chihuahuas sounds like trouble to me, but the kind of trouble that''s lots of fun. Our little girl is a total handful and we just never know what she''s going to get into next. Very smart dogs! We have 2 older dogs, a male Bouvier, and female Smooth Fox Terrier. At first there was a bit of fighting between the 2 females, but we let it go as naturally as possible, letting them establish their pecking order, and now it''s just fine, no problems at all. If anything, now the older female makes a point to be gentler with Lola since she''s so small. I would expect some kind of fighting at first. It all depends on each dog''s personality too.

Good luck! I don''t know if you want another male or a female. I think either could work as long as everyone is spayed/neutered, and all have nice temperaments. 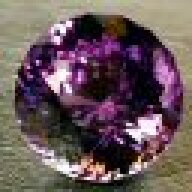 My boyfriend had 4 dogs when I moved in. I didn't bring my cats but I brought my Golden Retriever. Just had to deal with him being acclimated to living with other dogs and him learning his place. They're all good friends now. The chihuahua mixes can be a little snippy sometimes, but for the most part it's been great.


EDIT: Oooer, a Bouvier. Beautiful!! I've never had the pleasure of seeing one in person!

Until very recently, we were a two greyhound/one beagle mix family (just like Jazmine!!!) Sadly, my two greyhounds passed away recently, within a few weeks of each other. When we had the three dogs together, it was more difficult (especially when my two greyhounds were ill, it was really more than I thought I could handle emotionally). We have since adopted another greyhound, and I think we will be staying a two dog (and three cat) family now. Things do seem simpler with only two dogs.

I''ll be honest, though, I know I will want to adopt another at some point. It''s just the way I am. DH is not so much, so we''ll see how it goes.

Jazmine - Have you posted photos of your greyhounds on here before? I''m off to check old pet threads now?

Before we had our Lhasa Mazie, we had 3 Lhasa''s. We had the mother, father and kept their baby, who was the runt of their litter. We were so happy we did. They were their own little family. They ate together, they slept next to each other (of course on our bed)

"Life is what happens to you, while you are busy making other plans". John Lennon
O

My parents have three big dogs and they all get along great. They are very well trained though and are all different ages but I think provided that you can afford three of them then there''s no real problems.

I currently have three dogs, 2 very small yorkies and one chihuahua. In my life, I''ve had three dogs a few times. I just told my husband I will never own three at the same time again. 2 is much much easier. The amount of dog poo I pick up is a pain, thank god they''re small dogs. Keeping an eye on three, grooming three, feeding three...it can be a bit much. I stopped at two kids because there are two parents and you have two hands...I suggest the same for pets. Plus, it seems when two play the third one wants to break it up, not join in. I suggest you stick with 2, 2 is a lovely perfect number. Easily transportable too. Traveling with three dogs, not so easy. 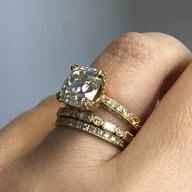 Date: 3/23/2009 10:39:53 PM
Author: PugLover
For a few years now we have had three pugs. We started with one and right away we knew we wanted another. Then a couple years later we ended up with a third. I didn't think there would be any difference in adding the third, but it is a little different. Walks can be ummmm.... interesting sometimes. Of course then there is the cost of food, toys, vet bills, etc. But we knew all this going into it and though I do see a small difference between having two and three, I wouldn't change it for the world. We love them all! But I think three is the max that our family could handle. This is definitely a big decision though so take your time in deciding what would be right for you. Good luck!
Click to expand...

Ditto! We're a three dog family (two lab mixes and a Great Dane), and I love it and wouldn't change it for the world, although it can be a bit . . . um . . . *challenging* sometimes! We don't have any human children either, so our pups really are "kids" to us.

Of course, we have BIG dogs (our smallest weighs about 60 pounds and our Dane weighs about 110), so to me, three Chihuahuas would be a piece of cake! LOL!

"Goodness had nothing to do with it, dearie." ~ Mae West

When my nowDh and I had roomies - we were a 3 dog family. My roomie added a lab that his girlfriend wanted to rescue. The dog had been through 5 homes in less than a year and was still a puppy. The previous owners never trained this dog... anytime she would bark or do anything, they''d feed her. So he brought the sad story home.

The three dogs were - A year old overweight 90 pound female lab, a 3 yr old 45 pound male pointermix, and a 2 yr old 15 pound male cavalier. The two big dogs had dominence issues they were trying to work out.

The dogs would pee and poop in the house trying to mark the territory. The pointer mix - was house broken, and never had an accident before the new addition to the family. They would mark each other''s toys, and growl at each other. They would try to show their dominence by humping - and this would end up with some serious fights. The pointer mix became very food aggressive, and this became an issue at meal time. THe smaller dog would often hide, or roll over to immediately show his submission. We would take our dogs on walks with us for 1-2 hours to help alieviate the extra energy. The roomie did not want us to walk his dog as the dog had zero leash training, and didn''t want to have us help.

The roomie moved out and took his dog with him - and normalcy resumed in our house. Because there weren''t three dogs to contend with the roomie started taking his dog to training classes, and actually started to WALK her. She is doing much better now, and now that she has training and has been exposed to other animals, she might be able to be a part of a multi-dog family.

It is just a little hard when adding adults to an adult mix. Because of our unique situation, I think we''ll remain a 2 dog household... unless we get another cavalier -- those dogs are best in 2''s and 3''s... and I have never had an issue with my little guy they are a pretty low energy dog - think bulldog energy.... but definately no more big dogs.

I''ve got three. It is much more difficult, but manily because the third one is one we found and she''s a bit of a terror. An absolute sweetheart, but not so easily trainable. She and my other girl are best friends though, and seem to really enjoy each other''s company. If I hadn''t found her, I priobably would''ve kept it to two, but I don''t regret keeping her even though she''s a pain sometimes.