I've been a long time lurker (as in really really long time lol) and I'm finally taking the plunge. I'm glad to join you ladies on the LIW forum.

Me and my boyfriend have been together for a year and a half, living together for six of them. We met about two years ago, when I was living with my then roommate. He was a really good friend of my roommate, so he was over all the time. When I met him, I initially thought he was so funny and smart. He has the same dry sense of humor and sarcasm as I do. We all spent many long nights just hanging out at the apt, all three of us. While I thought he was really cute and an all around great guy, I didn't want things to get weird between me and my roommate, in case things didn't work out. Well fast forward a few months later and one day, me and my roommate were hanging out, running errands and I was talking to him about my dating life (things were really not looking good in that dept lol). My roommate then says to me, you know you and JJ would really make an awesome couple. You guys get along great and I've seen how he looks at you

A few days later, JJ came over while my roommate was out and we started talking. Well he told me how much he liked me, how since the first time he saw me, he wanted to kiss me and that the more time he spent around me, the more he realized how much he truly liked me as a person, and that I was an amazing woman. He continued with all the mushy stuff a little while longer and then I lost my composure and kissed him!

Jump to now and I've found a wonderful man

We've had our ups and downs, but through it all, he's been my rock, just as I've been his. I've found my best friend, someone I can truly be myself around. He openly discusses the future with me, us getting married and having children, buying a house, having a wedding, all that good stuff

He's shown me rings before and asked me what kind of rings/diamonds I like, so I'm almost positive he's going to propose. So here I am ladies, ready to wait it out with all of you. 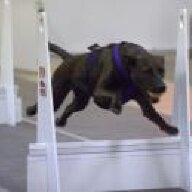 Welcome! Enjoy your stay here.
"My goal in life is to be as good of a person my dog already thinks I am." -Author unknown

Lovely story! Brought a smile to my face.
Welcome!!

Welcome! What a sweet story Your bf sounds like a great guy! Hope you won't be a LIW for too long Do you know what you are looking for in an engagement ring yet?

Welcome! I hope your stay is short!