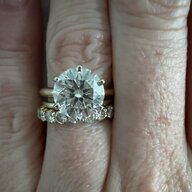 Hi everyone, I am new here! My SO and I have been together about 1.5 years and discussed marriage/engagement around Thanksgiving last year. Now, we''ve been friends for over 10 years, I''m 25 and he just turned 26. It''s about that time!

A few months ago, he started a "Ring Fund" for me, however he is really limited as far as his contributions towards it. Some of the reasons are he''s a teacher in NYC (hopefully will be getting a new higher paying job by home this fall), goes/pays for grad school and lives in an expensive apartment. For the past 8 months, his roommate and him have been splitting rent on a house that originally 3 people split. This is making my BF pay rent that is above his means. I was living in NYC, but moved back home so we can save money. He has the option of moving home, but does not want to, and his lease is up in May (but he says he''s renewing).

The issue is, is that we have diffeent ideas of what he should spend on my e-ring and the amount of money he could be saving by moving home. Originally he said $4000 for the budget, but honestly (and without sounding snobby) I wanted a bigger ring than that. I offered to pay the difference, but he''s particular in that HE wants to buy it himself and surprise me. Well, after some talks, we decided $6000 would be the budget. He''s only saving 100$ a month now, but will be getting a second job in the summer when school is on break for some extra money.

I ask him (probably bug him!) when he thinks we will be getting engaged, and he says next summer (200. That''s fine with me, but he''s only saving 100$ a month right now! I don''t see how this is possible. He says that once he starts his new job in the suburbs he''ll be earning more, not spending so much on commuting, and also not have to put alot of his money towards classes since he wont be taking any in the fall. I just can''t get over that he could be saving so much more if he just moved out of that stupid house that is sucking him dry! I feel like I am the one saving all the money for our house/wedding, but it''s hard for me to understand and accept why he does not have alot of spare money right now.

Ok, well I am getting antsy and I want us to be engaged already. I know you ladies understand the impatience of waiting for something so special. I guess I had to get this off my chest.. ANy thoughts or similar experiences welcome!

A guy''s perspective...
Why not let him stick to his original budget in the setting you like? Buy the ring from an online vendor that has a good upgrade policy. That way you guys could get engaged with a very nice ring and he can keep saving for the upgrade.

Hi, thanks for responding. I could do that, but I would rather not have to go through the hassle of upgrade later. What I get now is what I want to stick with for awhile!

I want either a yellow gold tiffany style setting or 1/2 eternity band setting. Since the latter is more expesnive, I would rather have the cheaper setting now and getting the setting I want just prior to the wedding with the matching band.

Thanks for your thoughts!
M

If you know what you want, you know you''ll have to wait for it! It''s really hard (believe me, I know) but it''s worth the wait in the end. Good thing you found PS, it''s a great place to vent!

I say to talk him into letting you contribute. FI set a budget of around the $4k mark. We both make 6 figures in US$, have no debts except a London mortgage and are maxing out all our ISA''s, pensions etc - but we felt that was a good figure to spend on an e-ring and in line with most of our friends.

Except... Pandora is a PS addict and I like sparklies.

I don''t wear much jewellery - I have nice pearls and some simple earrings and lots of odd bits and pieces in boxes that I don''t wear, but can cackle over in an old crone/fagin like way! I have always wanted a really beautiful e-ring. I know the total is going to come in around the $6k mark so I am paying the extra. Also that way I can decide to have the better melee and more of it as I don''t feel guilty.

Maybe having the proposal before the ring detracts from any unromanticness in my paying for some of it?
Pandora
FGA

I have a different opinion. I say get engaged with a ring he can afford. you are, after all, marrying a schoolteacher, and a 4-6k ring is unrealistic for school teacher salary. I think you need to adjust your expectations.

Maybe since he expects an engagement next summer he''s planning to contribute more to the ring fund when he''s able to. Is it possible that he''s saving more than what he''s telling you? He might just be trying to throw you off.

In any case, you really should buy what you can afford. You say that you don''t want to go through the hassle of upgrading, but I don''t think its that much of a hassle. I can truly relate to your situation. You sound a lot like me. I had my heart set on a certain size diamond, but after a while I realized how ridiculous it was for me to be expecting such a thing and how I''d look a bit silly with that rock at my age. I didn''t want to upgrade either, but now we plan to eventually. Its not a big deal. Like you, at first I was a little annoyed because I thought he could also be saving more towards the ring. But that feeling passed. I was just having one of my bratty moments and feeling frustrated because I wanted us to be engaged already. I really didn''t want to ask for too much after thinking about it, because we''re young and there are better things we could do with that money. I wouldn''t want my guy to go into debt or struggle just to buy me a diamond. I''m extremely happy with what we chose, and maybe in 10 years I''ll have the diamond I always wanted. Its worth the wait because the man is the real treasure, and that''s what I have already.

Hey welcome!! I agree with some of the previous posters in that he shouldn''t go into debt to buy and engagement ring. I would talk to him more and more about you contributing towards the cost of the ring, if you want one more expensive than the money he has. Ive nearly been a LIW for a year and its hard not to talk to him about it, but as much as you can, try not to bring it up with him all the time. I know my bf gets a bit ratty with me when I go into overdrive!!

Hi everyone, thanks for responding with your opinions!

Well, let me address a few points that were brought up...I don''t mind helping supplement the cost of the ring so that I could get what I really want. I did mention it to him once before, but he wasn''t crazy about that idea, so I dropped it... I may mention it again and see what happens. He is alos HUGE on surprises, so when Goldenstar said he may be trying to throw me off, that sounds very much like him!

In regards to Ladykemma''s point, he wouldn''t be moving home to save just for my ring. We will also be paying for a wedding ourselves and hopefully a house soon afterwards. However, it is hard to pay for a house when he is renting one that is above his means. It''s not that I''m pissed that he''s not saving more for a ring, it''s that he convinced ME to move home to save, but he refuses to do so because he''s "the man." He feels like he should be living on his own. Now, I felt that way as well, as I have not lived at home since college and the "I''m the man" comment seems hypocritical. However, I felt that saving for our future would be more beneficial than throwing money away on rent when we eventually want to own shortly after being married.

Surprisingly, NYC suburb schoolteachers do make pretty decent money. It is not uncommon for teachers to retire with more than 6 figures here. He does make a nice amount of money, but it''s hard to see that when 3/4 of one paycheck goes towards rent and premium cable/internet (I''m talkin hundreds of channels and extras!!!) Plus that house is so old and drafty, it cost $$$ to heat in the winter and cool in the summer. Argh, that house

. I know things will be easier for him when he gets a job up here and starts making more money...I know he can''t wait either!

Anyways, thanks for listening to me vent, all. I appreciate it. I hope some of you ladies get your rings soon!

Date: 3/24/2007 4:03:18 PM
Author:Shannon72781
For the past 8 months, his roommate and him have been splitting rent on a house that originally 3 people split. This is making my BF pay rent that is above his means. I was living in NYC, but moved back home so we can save money. He has the option of moving home, but does not want to, and his lease is up in May (but he says he's renewing).
Click to expand...

Could your boyfriend and his roomate advertize on Craiglsit (or elsewhere) for a new third housemate? That would help cut his rent costs again and help save money. They shouldn't have much trouble at all finding a roomate in the NYC area.

He could be throwing you off. I got super anxious and upset last winter when my extremely honest fi (now-dh) told me what he''d saved up. It was much less than I had expected and he had been buying himself cd box-sets and video games. Turns out he lied! He''d already finished saving.

Maybe yours is being less than honest too!

Also I agree that you may have to revise your budget expectations. $4000 was our original budget too, but we decided $2500 was a more reasonable figure. We decided to go for unique and I have a beautiful original antique e-ring that was under budget and I''ll love it forever.

depends how your b/f feels about upgrades.

My b/f hates the idea, you get one ring and that's it! So, that means going into debt and he's fine with that.
He says what's the difference?! We have a house, might as well go further into debt we'll always have debt. He has a weird philosophy, but things will be looking up soon once I can work more and he gets a raise.

Also b/f based the budget on his best friend's e-ring $4k, but we ended up going over that, because of unforseen bumps in the road of needing a custom setting for my sapphire.