I''m going to be going shopping for bm dresses with half of my bm''s in a couple weeks and I can''t decide if I want them to have long or short dresses, so I decided to do a mock up. The short dress is one that we''re actually considering (all of the girls love it, but my mom doesn''t) and the long one is just one I found at David''s Bridal that has a similiar neckline to my dress. What do you think? Can they do short or does the formality of my dress require long dresses? 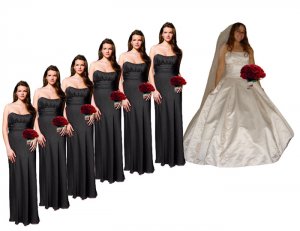 The ones the girls love 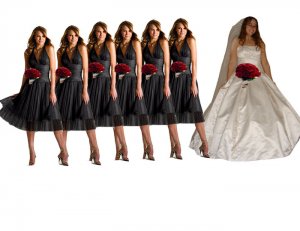 SHORT! We''re so going for short, and my dress is a ballgown close to yours but with pickups. 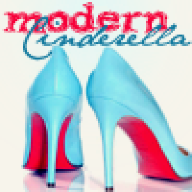 is this a nightime wedding?

i think they are both BEAUTIFUL choices! i'd wear either! very nice! i love the short, semi-formal look and the long look. both would work.

i have to agree the short version is very sexy and different. its not the same-old, same-old.

I like the short one, personally. I'm not a huge fan of long black dresses at a wedding unless there's a sash or something to bring in some color.

i'm having the exact same issues with my mom, I want tea lengthish dresses for the girls and she thinks they should be long, she keeps saying "don't accomadate people, do what YOU want" even though that IS what I want, it's just not so much what she wants...it'll likely be tea length but I know she'll go around brinign it up to people like "I dunno, she wanted shorter dresses even though I think longer would have been better" while making faces that looks like she thinks I'm crazy behind my back (she does this alot when she doesnt agree with me, she'll bring up the disagreement thing to people as though it's awful but that's a whole other thread to start another day when we all have lotsa time haha)
*~SP~*

Thanks for the opinions!

Rose, they''re from Bari Jay. I saw them in someone''s bio on the knot and loved them as did all of the BMs. When I searched for them online I found them for $130. Can''t remember where that was though.

Your mom isn''t wearing the dress and unless she is buying the dresses for ALL of the bridesmaids then she really doesn''t have any more say than the others. I say if you like the short one and the majority of your bridal party likes it, then go w/ that one. 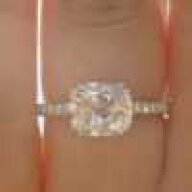 Oh I really really LOVE the short dresses...it looks like it could be very wearable in different situations (not just the once for a bridesmaid dress dress). If you want to see something similar on real people take a look at the post I just left for equestrienne. Only difference is strapless v. halter.

I love the short one. The black one is lovely but a bit too gowny maybe? Looks like something to wear to a black tie party, and while I love it I think the short one is great and looks like a fun dancing dress!
****************************
"There is no such thing as fun for the whole family-there are no massage parlors with ice cream and free jewelry" Jerry Seinfeld

Could you get a slightly different dress for your maid of honor? That way she stands out as a bit different and I think that can look nice...
****************************
"There is no such thing as fun for the whole family-there are no massage parlors with ice cream and free jewelry" Jerry Seinfeld

Rose, they''re from Bari Jay. I saw them in someone''s bio on the knot and loved them as did all of the BMs. When I searched for them online I found them for $130. Can''t remember where that was though.

Sweetpea, the problem with my mom isn''t so much that she doesn''t like them it''s also that my sister is one of my maids of honor and she''s 15 so my mom has a bit more of a say than if she didn''t have to buy one.
Click to expand...

In that case, hopefully your mom will let you choose the dress you want... you could always tell her "ok, you choose the dress for my sister, but she''s gonna look different from everyone else since I chose this one" and maybe she''ll back down...I''d say it in a nicer way of course, sort of making it her decision to let your sister look like everyone else, which she WILL if that''s the dress you put everyone else in (lil'' bit of reverse psychology going there, I''m learning LOTS in sales training!). Just seem accomadating, understand where she''s coming from, and I''m sure it''ll all fall into place.
*~SP~*