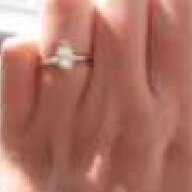 I am a little annoyed--my BM dresses were supposed to be in March 1 and they aren''t here yet. I called the store on Friday and they called the manufacturer (Mori Lee) for me to see what was going on. Basically, they found out that 5 of the 6 dresses are ready, but the last dress won''t be ready until April 1! (We ordered the dresses at the beginning of January.)

My wedding is on June 13, so I know that everything will be fine as long as it is ready on April 1 like they are saying. (After it is ready, they ship it to the store, which could take a week, and then they ship it to my BM, which will take a few days. So she will actually get it closer to the middle of April.) I just am worried that if it was delayed once, it could be delayed again. And I want them to have plenty of time for alterations if they need it (the dresses were ordered 2 to 3 sizes larger than their street size, which I know is normal, but I still have that little worry in the back of my mind that they will be too big!). Also, weren''t the dresses all supposed to be cut from the same dye lot, or is that a myth?

Anyway, I realize it''s not a disaster, but I wanted to vent a little bit!

I am sorry, I cannot offer you much help but hugs!
~*Alexis*~

I too am getting married in June, but the week before you, and my dresses aren''t due in until the first week of April too. I think you will be ok with getting the dresses in. Granted, I have AA dresses, but I think that a month plus will be more than enough time to alter them. And, if your girls are anything like mine, they are all waiting until the last minute to have them altered b/c they want to look their best

No worries, be happy!

In most cases, depends on the dress, it shouldn''t take more than a week to alter a bridesmaid dress. There are other factors but as long as they have a month to get them altered you should be fine.

Since the dresses are not coming in on time like the store said they would I wonder if you could work something out with the store (if your bm''s live close by) where they can get a discount on alterations if they need them. That way you know they will be tailored perfectly and the store sort of owes you something if they aren''t living up to what they said they would.

Time wise I think you are fine.
EM1

Thanks for the reassurance everyone! I am realizing now that it''s not that big of a deal.

As long as the dress comes in April like they said it would, everything will be fine.