I can't quite believe this has happened. I have an annual pass for London Zoo and go there with Daisy pretty much every other week. I saw Tiny only last week cuddling and playing with his mother - she must be so devastated.

I first saw him at just 2 weeks old. Daisy always asked to go and see the baby gorilla - not sure I will be able to bear going to see the gorillas for a while.
Pandora
FGA

that's sad to hear. especially you have some kind of relationship with the little baby already =(

That's awful that it happened. What I don't understand though, is why the new male was brought in to begin with? Most males will not accept another males offspring. Isn't that the whole point of having one male in a group instead of many?
*** 1 in 100 ***​

The video of Tiny taking his first steps is SO sweet.
Proud mama of 5 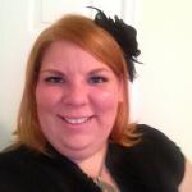 It said the new male was brought in for fear that only having the females would create problems. That is really sad
"Sometimes life's Hell. But hey! Whatever gets the marshmallows toasty."

I knew they were all very nervous about introducing the new male and were hoping that the baby was about the right age to be accepted. They're experts at London Zoo - it's a major research centre as well as running two zoos - and I'd have thought it must be for good reasons that they were risking this.

I spoke to them when my python was dying and they were so nice and helpful even if in the end he couldn't have been saved. The keepers seem to spend their lives there - some have been there 20 or 30 years and they're utterly devoted to the animals. The primate team must be devastated - everyone was so in love with Tiny.

One of the other females is 36 and obsessed with little girls in pink - she just can't get enough of watching them. I've often wondered who is entertaining who with the gorillas!

When I was a kid we went to one of the other big zoos in the UK which specialises in breeding gorillas and one of the keepers' wives was pushing a double stroller round the zoo with her 7 month old baby son in one side and a 6 month old baby gorilla in the other, both in matching sleep-suits. The gorilla had been rejected by his mother and so the keeper's wife was bringing him up alongside her son till he was old enough to be reintroduced to the group. He's still there now and a big silverback!
Pandora
FGA

This is just so sad. Poor little thing.

This really saddened me. I remember seeing a video of him a few weeks ago...actually, I saw it multiple times. He was just the cutest thing.
"Happiness is that state of consciousness which proceeds from the achievement of one's values" - Ayn Rand

That's so sad That video was adorable. The poor thing, and his mum - and the caretakers to, they really must be heartbroken
Some circumstantial evidence is very strong, as when you find a trout in the milk.
~H.D.Thoreau
You must log in or register to reply here.
Be a part of the community Get 3 HCA Results
Jewelry Blog