A rare white giraffe is spotted in Tanzania

It's not something you see every day -- a rare white giraffe, first spotted last year in Tanzania's Tarangire National Park, has been seen and photographed again.

The giraffe was named "Omo" after a popular brand of detergent in the area, writes Wild Nature Institute (WNI) in a blog post.

"It is very rare, this is only the second record of a white giraffe in Tarangire over the past 20 years or so, among more than 3,000 giraffes in the area," Derek Lee, Ph.D., WNI's principal scientist, wrote in an email to CBS News.

Wildlife watchers at WNI say Omo gets her unusual coloration because her body surface cells are not capable of making pigment, but she is not albino. She is instead leucistic, which is when all or some of the pigment cells are unable to develop. 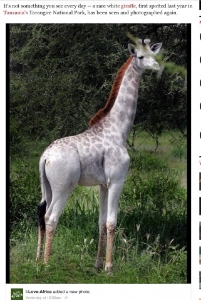 Amazing. I saw this on FB earlier today but didn't pay much attention. It really is an interesting mutation.
Pronouns: she/her

Wow, thank you for sharing. She is beautiful.
“Until one has loved an animal, a part of one's soul remains unawakened.”
― Anatole France

She is beautiful!
~~~Thanks to PS, my wants far exceed my budget!~~~

Correct! It has lost its natural camouflage defense.
Sometimes the mind ignores what is logical because the person cannot accept the reality of what it is.

It actually makes me sad that they are photographing/making such a big fuss. My ILs are from TZ, and the poaching is out of control. I bet they will start searching for this rare giraffe and make a fortune off her death

These are my favorite animals.

Oh no, I didn't even think of this. So she is not being protected?
“Until one has loved an animal, a part of one's soul remains unawakened.”
― Anatole France

Oh no, I didn't even think of this. So she is not being protected?
Click to expand...

I think they try their best but the reserve is a huge area and there are only so many of the Park Rangers. The poachers are well armed, come with scouters/trackers, and etc. They are fully prepared and well funded.

Sometimes the mind ignores what is logical because the person cannot accept the reality of what it is.

It's sad, but it does seem to make her a target for poachers.

READ MORE
“It is illegal to kill giraffes in Tanzania because they are the national animal. But illegal market hunting for meat is well-known to be rampant around Tarangire.”

“Unfortunately all giraffes, not just white ones like Omo, are threatened by bushmeat poaching, as well as habitat loss," he said.

“Giraffes have declined drastically all across Africa... The situation is so dire, that in Africa today there are currently four elephants for every one giraffe, so they are a threatened species.”

However, Mr Lee said the fact that Omo lived in national park meant she had “the highest chance of survival thanks to anti-poaching efforts in the area”.

Do you remember that whole 'Kony 2012' thing a while back? A pretty terrible guy. He made (some of) his money by going into national parks and killing elephants. One National Park in chad has lost 90% of it's elephants. Unfortunately being in a national park does NOT guarantee the animals safety.

I read this article in NG a while back. It's interesting, and very sad what poaching has done. http://www.nationalgeographic.com/tracking-ivory/article.html
You must log in or register to reply here.
Be a part of the community Get 3 HCA Results
Jewelry Blog