20 Adventures for 20 Yrs of Caring for Dad

I love this story!

It reminded me of a trip to Ireland with my Mother and siblings, two years following the death of my sister-in-law. It was wonderful to see my brother slowly come alive again over the course of the trip. The passing of a loved one is painful and can leave us feeling lost and adrift; its wonderful to progress from that stage to being able to remember the person with a smile or a laugh and gratitude for having been blessed with their presence.

I've copied the article below, but here's the link.
http://www.msn.com/en-ca/lifestyle/...anks-mom-with-epic-trip/ar-BBxmHy0?li=AAggxAX

20 Adventures for 20 years of Caring for Dad: Son Thanks Mom with Epic Trip

A son who wanted to thank his mom for caring for his dad for 20 years is taking her on a whirlwind trip to 20 European destinations and they're sharing their adventures on their blog, The Little Girl from Kamas. But the vacation is giving them both much more that beautiful photos and videos.

"I get to hug my mom every night, show her things she's always wanted to see, and have her hang on my arm as we walk around each city," Barton Brooks, 45, told TODAY via email. It "has just been perfect."

For 20 years, Brooks' mother, Carla, cared for his father, Karl, after he suffered a debilitating stroke. Following Karl's death, a year ago, Brooks worried about Carla, 77.

"It wasn't a huge shock when he passed away, but after caring for him 24/7 for nearly 20 years — she was just lost," Brooks said. "She was sad and lonely (obviously), but there was more of a melancholy about what she was supposed to do next."

An idea struck Brooks as he was looking through slides from Carla's infamous trip to Europe in 1962, which she took after learning her then-fiancé was two-timing her. She grabbed the wedding money and headed off for international travel. Brooks wondered if he could coax that strong-willed adventurous spirit from his mom by recreating that vacation.

"I decided to use those pictures as a guide and take her to some of those locations — try to re-find that young woman," he said.
He and his fiancé, Gregg Goodbrod, 43, put their lives in Woodstock, NY, on hold, secured their finances, and started planning. But, when Brooks and Goodbrod first proposed the trip to Carla, she hesitated.

"I was surprised and overwhelmed, and was really excited, but just didn't think I could do it," she said via email. "But I decided I wanted to try!"

On September 29, the trio landed in Paris and have since visited, Disneyland in Paris, Switzerland, London, Talacre in Wales, Budapest, Prague, and Munich. The trip represents more than simply helping her find her lost spirit. It's also a way to show gratitude.

"We're giving her 20 adventures for the 20 years she gave Dad," Brooks said.

Almost half way through their travels, Brooks has noticed a transformation in Carla.

While Brooks hoped the trip would help Carla, the three often remember Karl. On November 7, Karl's birthday and the year anniversary of his burial, they visited Talacre in Wales, where Karl's ancestors lived.

"The most meaningful day was in Wales when we had the memory day for Karl," said Carla. "We spent that day at the lighthouse where his great grandfather was the lighthouse keeper 150 years ago, and we'd been there together before — he loved it there."

Goodbrod, who lost his mother 20 years ago, enjoys the trip because it is giving him time to reflect on his own mother as well as bond more with his future mother-in-law.

"Sometimes things get a bit tender for me as I think of my own mother, but to have this adventure with my fiancé and his mother, well, it's just been an incredible experience," he said.

The trio also makes time for fun. So far one of Carla's favorite experiences was the baths in Budapest. While she felt unsure at first, as soon as she eased into the warm mineral water, she relaxed.

"Seeing her swim around in Budapest like Ester Williams — I just loved it," Brooks said.

The travelers have many adventures ahead of them, including Alsace in France, Strasburg in Germany, Vienna and Salzburg in Austria, Rome, Florence, and Venice in Italy, and Paris, among others.

"I've already gotten more than I could have ever dreamed," he said. "It was the best decision I've made." 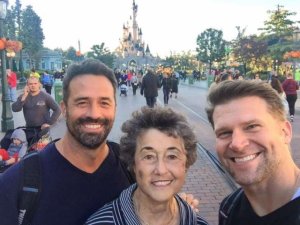 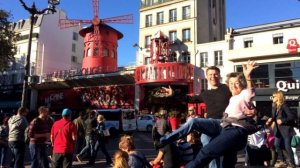 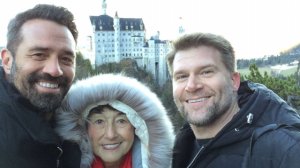 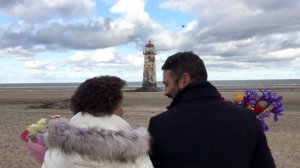 Great story! Thank you!
What others think of me is none of my business.

Sounds like a dream trip to me and she surely deserved it after being a good provider for 20 years. What a great son!
~~~Thanks to PS, my wants far exceed my budget!~~~

Thank you for sharing this wonderful story. What a nice son!

What a wonderful son. His mom looks so happy!!!

Thank you for sharing this with us December Fire. Beautiful story and I was a bit teary eyed reading about this selfless mom and loving generous son (as well as the FI who was happy to join them). A good holiday read embracing what is important about life. The people we love and how we show that love in many ways.

“Until one has loved an animal, a part of one's soul remains unawakened.”
― Anatole France
D