Get the Look: Ginny and Georgia

One of Netflix’s new original productions is Ginny and Georgia. There is scandal, love, hate, murder, and all the things that make a show like this amazing! As of March 25th, Ginny and Georgia has spent more time than any show previously on top of Netflix’s top 10 list. It passed Tiger King to take the top spot. For a show with far less hype, that is incredible. The jewelry looks are served hot too, and we enjoyed the watch!

The entire pandemic has redefined how we watch TV. I have something pulled up on a second monitor while I am working about 75% of the time. I have gotten into the habit of watching just for jewelry pieces that I love, and so I get to share. The burn-through nature of binge-watching means that I often see a whole season of a program in a few days so there is always something new.

Ginny and Georgia largely orbits the titular characters. Ginny is a 15-year-old biracial young lady, and her Mother Georgia, a 30-year-old blonde bombshell. Georgia has had a rough go of it and is desperate to keep her children, Ginny and her youngest a small blonde Harry Potter aficionado named Austin, away from the experiences that she had to endure. In so doing, she has become a bit of a scammer, maybe even a black widow. She knows how to present herself to create the most drama, and beauty to pull all the focus that she uses to survive. There are some poignant uses of accessories that are not jewelry as well but help to develop the storyline. You’ll have to watch to figure out what those are 😉

Some inspired casting choices were made as well. The neighbor twins the vibrant Maxine (Sara Waisglass), and her brother the brooding Marcus (Felix Mallard) look like they could be related and pull off a teenaged sibling rapport. The twins’ mother Ellen, is smartly played by Jennifer Robertson (from Schitt’s Creek) and it was awesome to see her in the cast! Ginny (Antonia Gentry) and Georgia (Brianne Howey) both have gorgeous megawatt beaming smiles and though the actresses are not far apart in age, they somehow sell the daughter and young mother vibe.

They recently moved to the more well-to-do Wellsbury, Massachusetts. The looks are vastly different from parts of the life that Georgia is running from, as we learn via flashbacks. This is a coming-of-age tale in two generations and while that might be a bit intimidating for parents to watch…I don’t think it is too inaccurate.

One definitively true thing was that the course of our recent age stepped blogs (twenties, thirties, and forties, so far) seems to be in play here. These young girls are rocking jewelry that while not fine, is colorful, on-trend, and allows them to creatively express themselves. When I was in high school, that involved a lot more piercings, I think this way is probably better, with no physical scars.

There is, of course, an engagement. I won’t say who because it’s still a new offering from Netflix, and you should get a chance to experience the story yourself if you’d like. It’s a wild ride, to be sure. We all must learn who we are, and what we present on the outside is the first takeaway the world gets of us. Georgia has harnessed that power and uses it to every advantage she can.

There are characters you will love, and some you may hate. The actors bring the characters to life in an excellent way. You may come in for the Gilmore Girls nostalgia, but you stay for the murder mystery, love triangles, and updated fashion. There are controversial bits in the writing, and I think that helps to convey some reliability. Not everything is measured against perfection. I hope there is a season two.

Here are a few pieces that we felt would fit in among the characters in Ginny and Georgia!

What are you watching? Is there great jewelry, should we check it out? Let us know in the comments! 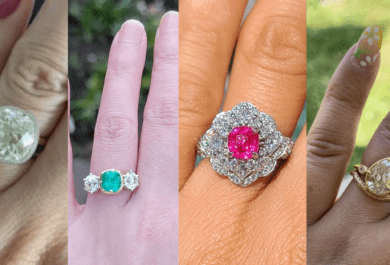