Lead Glass Ruby – The Nightmare that Keeps on Giving

I was heartsick when I hung the phone up: A client had called and was furious because I had ruined her stone… I had no idea what she was talking about.

I vaguely remembered the stone. I had checked it back in from my bench after having it set and barely paid it any mind other than to wonder why someone would spend any money to mount such an unattractive stone. Now she had called and told me in no uncertain terms that it was all my fault. She said the stone was covered in deep scratches that hadn’t been there when she sent it to me. I asked her to return it to me so that I could see what she was talking about and spent the days it was in-transit agonizing over what the heck could have happened.

I talked with my bench and he had no idea either; it was just one of dozens of stones his people had set the previous week. He vaguely remembered seeing a particularly unattractive ruby. In fact it may have looked worse after they set it, he said.

How had I ruined this stone? What had happened and what was it going to cost me to un-ruin it? I really had no idea and I was very, very worried about it.

When I received the stone my worry turned to disgust. This was not anything I had done. The stone had obviously been treated with some sort of filler (wax was my guess) which came out with the simple act of cleaning after setting. It was highly included, with numerous surface-reaching inclusions that were now no longer filled with anything but air.

I took a series of photos.

Here is a photo in low lighting, only much closer to the eye. You can easily see why she was cranky. 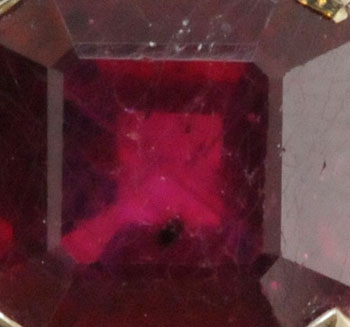 This next photo is a close-up in normal household lighting. It is easy to see that the inclusions reach deep into the stone. In fact you almost need a road map to find the clear spots. 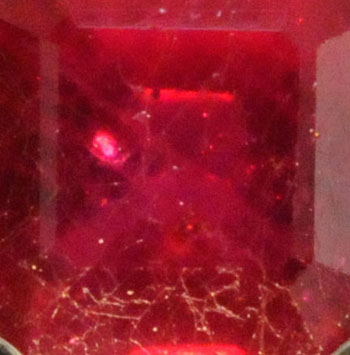 Here is a picture in lab-style reflected lighting that really shows how badly the surface is marred. 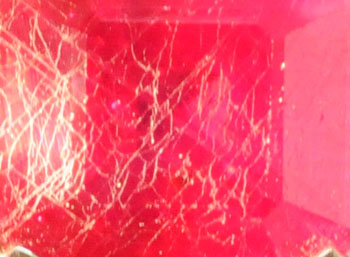 And this is a picture of the table reflection. These were the “scratches” that she was seeing. 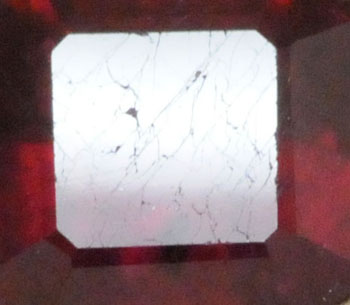 I sent these to my client with bated breath. If she did not accept these photos as proof that I had not “destroyed” her stone, but rather she had been sold a weakly disguised bill of goods, I was going to be in serious trouble. Right or wrong, I had NOT known about the stone’s treatments before setting it. Right or wrong she might expect me to replace it at my own expense, even though the person who treated the stone was the one who had duped us all.

Fortunately my client sent the pictures to the one who sold her the ruby and he immediately confirmed that I was right. He offered her another stone or a refund. He was totally embarrassed but stood tall and admitted fault. Once replaced, my client sent the new stone to be set in her ring. I did not charge her for the second setting and was actually quite relieved that she had been understanding about the whole mess (I have also started taking photos of all gemstones both before and after work is done).

But the story is not over… Remember that I was still thinking it must have been a wax treatment to have come out so easily. Boy, I was wrong, again.

The treatment in that ruby which I encountered was not wax, it was lead glass. Fairly new on the market, it is beginning to make its way into repair shops as rings need sizing, stones need setting or prongs need redoing. It is being sold by the bucket-load by many stores, some with good reputations like Macy’s. It will soon become endemic, and the public is NOT going to be happy.

I realized this is what I had seen in that ruby when I attended a continuing education program put on by the Accredited Gemologists Association at the JCK Jewelry show in Vegas. The session was moderated by Antoinette Matlins, a fine gemologist and gemological author and a tireless crusader for truth in the jewelry world. There were three presenters, Susan Flamm from the Jeweler’s Vigilance Committee, Christopher Smith, president of the American Gemological Laboratories, and Craig Lynch from Ouellet & Lynch; an appraisal firm in Phoenix. I have included videos that contain parts of the presentations by Mr. Smith, and Mr. Lynch. I will share some of the photos provided by Mr. Lynch below and would like to officially thank Ouellet and Lynch for allowing me to use these excellent photos.

Basically the procedure is this: Crummy quality rubies are leached in acid to remove mineralized inclusions, leaving a stone with the texture and strength of a sponge. Such a stone can crumble into a powder if you pick it up with a heavy hand. The corundum exoskeletons are then infused with leaded glass to both give them strength and to make them look pretty (well, prettier than they did in the beginning any way). The problem with this is many-fold:

Here is a before picture of a “nice” lead glass filled ruby before going into jewelers pickle, which is used by jewelers after sizing or soldering on a ring to remove fire scale: 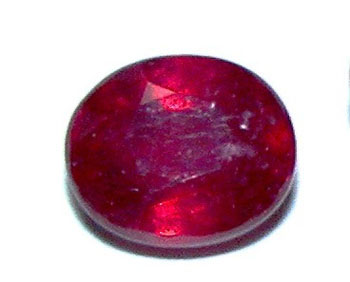 Here is the same stone after being in the pickle: 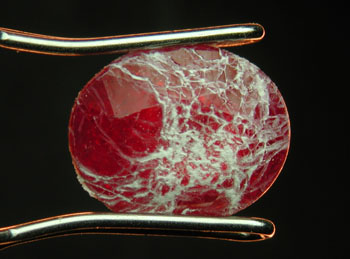 The lead glass rubies can be identified by the presence of gas bubbles within the stones and also by a flash effect that can be seen in the stones in the microscope. This is caused by the refractive interaction of light between the glass and the corundum.

The photo below shows gas bubbles that formed as the glass cooled:

The photo below shows the blue flash effect near the top of the stone: 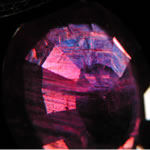 Here are the links to three separate videos. I have trimmed a couple of hours down to just a few minutes to show you in graphic detail what I am talking about.

Second, identification of lead glass filled rubies: 6:30 minutes. (Apologies for the poor video quality – I used my hand, not a tripod.)

Third, and last, The Nightmare that Keeps on Giving: 5:02 minutes.

This is just a short introduction to this problem.

Remember, when you are looking at any jewelry that contains rubies this is a new thing you need to worry about, and I do mean NEED! When buying rubies you must know who you are dealing with and you must ask some hard questions. Have the seller put in writing that this is NOT a lead filled glass ruby (or, as Mr. Lynch says, a “composite ruby”) Also get in writing that you can have this jewelry inspected and that you can return it if it is not what it is supposed to be. If you get them to tell you it is not lead glass filled and it is, then it is not what it is supposed to be!

You have now been warned. Sadly there are thousands of jewelers who do not even know this problem exists but, just like I did, they are about to find out. Many of them will not be as lucky as I was.

Macy’s caught selling leaded glass rubies as real rubies July 14, 2010 article. Near the bottom of the article is a video from ABC news with Antoinette Matlins, Chris Smith and Craig Lynch all playing parts in the video.