As one explores art galleries of Rome and of Florence, it is difficult to not become immersed in the literally brilliant use of jewelry in Italian Renaissant paintings. Considering the curious fact that many masters, most famously Botticelli, of the time were goldsmiths themselves, it is not surprising that the rebirth did not limit itself to classical genres, language, and philosophy, but also science and beauty as a sign of virtue. The styles of jewelry are depicted, aside from the fascinating use of light and shadow to illustrate the detailed appearance of the objects, to, not simply decorate the sitter or the painting itself, but to mark the amusing changes in fashion and, at times, their symbolic use.
Rings in Renaissant Art 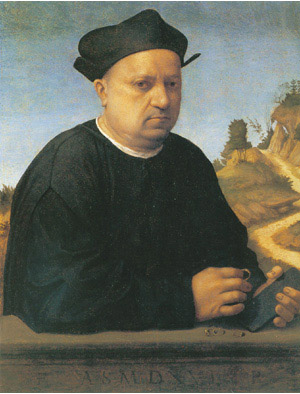 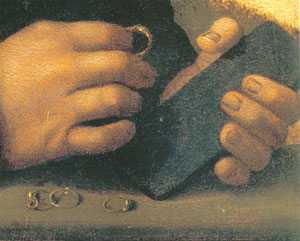 There are two very interesting things one must notice about rings illustrated in Italian Renaissant art, which differ very much from the styles of today’s conventions. Firstly, whereas ring designs are now, usually, made as elaborate as possible with, often, less importance placed on the purity of the compositions themselves, women and men, from around the 14th to the 17th century saw the matter strictly the other way around.

Franciabigio (1484-1525) created Portrait of a Jeweller (1516) (Fig. 1) of a man who is supposed by most experts to be Michelangelo di Viviano (1455-1526.) Michelangelo di Viviano was the household jeweler to the Medici family, a family that held religious, cultural, and political power from the 13th to the 17th century in Italy. Viviano was the most celebrated Florentine goldsmith because of his skill at setting gemstones and creating precious objects for the Medici. The painting portrays him testing one of several gold rings that he displays on a black touchstone, a pietra di paragone (Fig. 2.) The color of the streaks that are left on the touchstone would indicate the purity of the gold. There is a steep hill on the left background of the painting, with a narrow path winding up. The sitter’s diagonal placement of the shoulders makes a direct compositional link with the path, and it is thought that this “may thus be an allusion to the tangible rewards he had obtained through his skill as a setter of jewels and maker of precious objects for the ruling Medici family” (Waldman, 2005, 165.) Each ring he displays, however, is surprisingly simple, with one small gem set in a thin gold band. It is very rare that one sees a jeweler, part of the working class, sitting for a picture by a great master, whether it were commissioned by the Medici family or by the sitter himself. This shows that Viviano must have indeed been very famous at his work and, being considered one of the greatest setters of gemstones, it is evident that little importance was placed on the design of the gemstones or ring itself, but more necessary was the purity of the gold and the stone.

However, where citizens of Renaissant Italy may have not cared much for fancy design of their rings, they certainly were not satisfied with a limited amount of them. Though wedding rings were worn by both the man and the woman, they were often worn on the wrong fingers, and, in actuality, it did not matter to anyone, not only which finger held which ring, but even what part of the finger held it. This may be hard to believe, but is inevitably accepted when one examines Raphael’s La Fornarina (1520) (Fig. 3) and Portraits of Agnolo and Maddalena Doni (1505-1506) (Fig. 4.) (On the upper left corner of Figure 3, the myrtle and quince bushes are highlighted.) 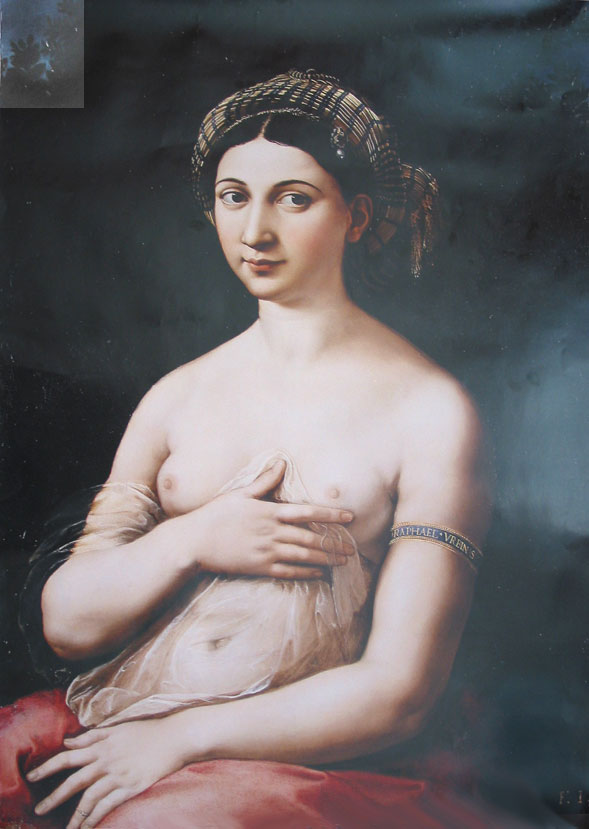 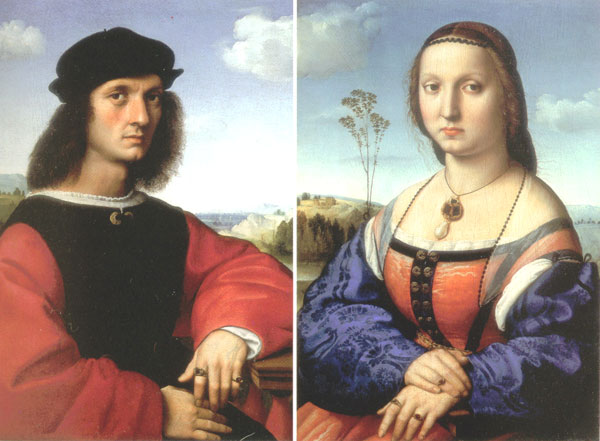 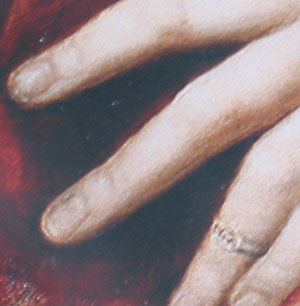 The women in each picture wear without discomfort a ring on the second phalange. One may speculate that there are two separate reasons for this. For La Fornarina, if one cannot help but believe the romantic rumors surrounding the relationship between Raphael (1483-1520) and the baker’s daughter he painted, perhaps he had painted her ring so faintly and so close to the edge of the painting (Fig. 5) because he knew that this affair would cause a great scandal. As he was publicly engaged to Cardinal Bibbiena’s niece Maria Bibbiena, who died before their wedding, Raphael’s school hastily covered up the ring and the quince and myrtle bushes in the background of the painting (representing fidelity and fertility) in order to get a commission from the Vatican over Michelangelo. From this, one may guess that, unless wearing a ring on the second phalange was not as awkward as it seems it would be, Raphael may have painted it this way to make it easy to cover up.

With regard to the portrait of Maddalena Doni, in accordance with her obvious obsession with jewelry, one might suppose she was contented with placing her rings wherever she could (Fig. 6.) In fact, women of the time wore as many rings as possible, the placement irrelevant, and, in consequence of this fixation, a law in Florence had to passed in 1415, stating that “a woman cannot wear on one or more fingers more than a total of 3 rings. And across all the rings and fingers she may not have more than one pearl or another precious stone. These restrictions apply to both hands” (Herald, 1981, 173). 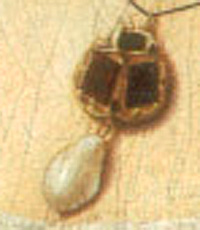 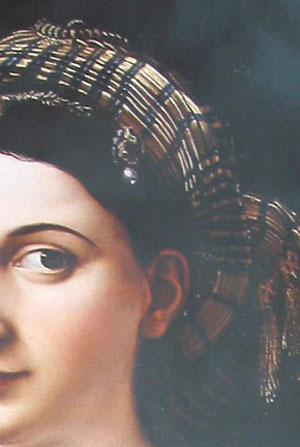 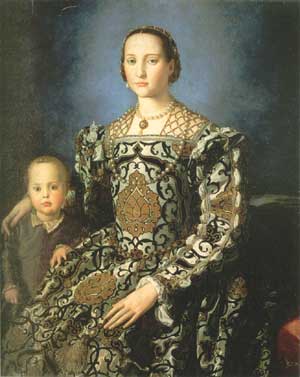 Many sumptuary laws of this sort had to be passed during this period in Italy, one stemming from an even greater obsession with pearls. The Venetian senate passed a regulation of pearls on October 15th, 1562, which stated that “those pearls, duly registered and sealed, may be worn round the neck on a tight string only by the wives of those in whose name they are registered, for a period of ten years and no more, which shall be reckoned from the day of their marriage” (De Stoc, 2002.) Let us explore the reasons for such strict regulation; does it not seem unnecessary?

When one looks back at the painting of Maddalena Doni by Raphael, the enormous (is it not horrifying to think how heavy it would be to wear?) pearl necklace she is wearing (see Fig. 7,) leaps out at the viewer before the multitude of the rings does. La Fornarina exhibits only one small pearl that hangs from her turban (see Fig 8,) and experts have recently deciphered its message to be proof that she is not the Maria Raphael intended to marry, but Margherita, since that the Latin word for pearl

The symbolism is repeated, though less subtly, in Bronzino’s (1503-1572) portrait of the wife (Eleonora di Toledo) and child of Cosimo I di’ Medici (Fig. 9.) Eleonora shows off her position in the world by wearing pearls wherever possible (see Fig. 10): as two necklaces, as a net in her hair, as earrings, as part of her dress, and, even, as a cluster of strings of pearls dangling off her finger (Fig. 11.)

In 1440, a book was released, describing how to make fake pearls, driving Italian leaders crazy. Venice became so upset with the false pearl trade, which threatened their real-pearl trade, that they made it illegal to make them, punishable by the loss of the pearl-maker’s right hand and a ten-year-exile (Evans, 1990, 78.) Diamonds and pearls were thought to have healing powers. Lorenzo de Medici drank a powdered concoction of these gems before he died in 1492 (Herald, 1981, 174). Of course, these were enormously expensive medicines (Dellaluna, 2004.) 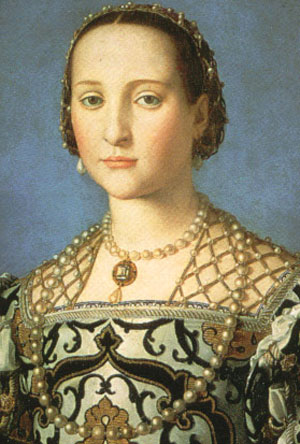 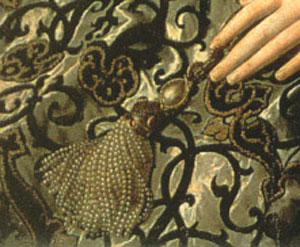 Until the Impressionists changed the view of art to be open to interpretation, paintings were meant to be read like books, with many allegories and symbols used to convey a certain meaning. Jewelry was effectively used as such symbols. 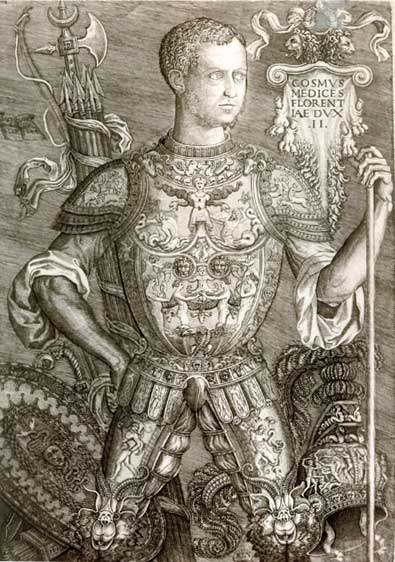 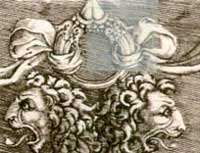 Niccolo Della Casa’s engraving Portrait of Duke Cosimo I de’ Medici, after Baccio Bandinelli (1544) (Fig. 12) may well catch one’s eye because it is a very detailed, elaborate mixture of the three conventional genres of engraving: the portrait, the battle-print, and the ornament print. Although the portrait seems at first to be a warning to rival families of the Medicean strength in battle, the symbolism engraved in Duke Cosimo I’s armor, shield, helmet, and so on, actually mean to reflect that of the dynasty. The Albizzi family was one of the oldest and noblest families in Florence and had led the Republican government for two generations. However, their love for war took a toll on the taxes and encouraged pacifists to favor Cosimo de’ Medici (not to be mistaken with Cosimo I de’ Medici) instead, and, so, this engraving would appeal to both the violent and peaceful minds. At the upper right (Fig. 13,) a diamond ring “was a Medicean symbol dating back to the time of Piero the Gouty, its hardness connoting the durability of the dynasty” (Waldman, 2005, 276.) This symbol reflected perfectly the state of this dynasty, as the family ruled from the 13th to the 17th century. 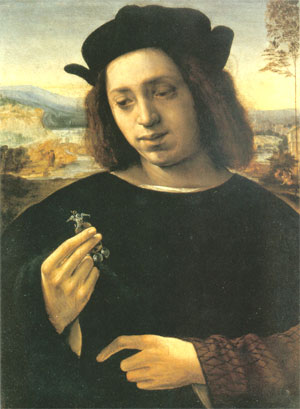 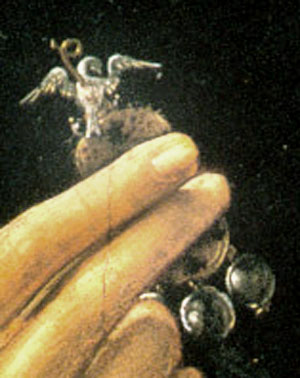 Ridolfo Ghirlandaio (1483-1561) had painted Portrait of a Man (The Goldsmith) (see Fig. 14) in 1515. Though the conventional interpretation of this painting holds that the sitter is a goldsmith, “the young man’s expression of fixed concentration, and the fact that he holds the jewel so that the viewer can see only its back, suggest that the object may have had a sentimental value, rather than functioning as an allusion to the sitter’s trade” (Padovani, 2005, 110.) What is very interesting, is that, as mentioned earlier, it would have been very rare for a goldsmith to be painted by a great master, unless he were truly celebrated and, maybe, the painting were commissioned by one of his wealthy, grateful customers. However, no one has yet suggested a famous identity for the youth, and so, perhaps, Ghirlandaio had wished, simply, to play around with light and shadow as it would exhibit the brooch and the sitter’s bittersweet expression.

If so, the former has been achieved wonderfully, as the brooch (see Fig. 15) stands out on the painting, the gems at the bottom shining, and the details of a dove on the top are emphasized. Possibly, if one knows more about the fashion or symbolism behind brooches of the time, it would give him a hint about the sitter’s expression. As it turns out, by the end of the 14th century, the old style of brooch, with a cluster of gems around one central, larger gem, had faded from use, to be replaced by brooches that were more like plaques rimmed in gemstones, depicting things like deer, doves, and (in one very ambitious example) a woman playing the harp (Evans, 1990, 62). Also, around 1460, heart-shaped brooches, as well as pendants, became very popular, often featuring heart-shaped diamonds and clasped hands. However, this brooch does not seem to be heart shaped, although it, possibly, is in the front, where one cannot see it. One can take the symbol of the dove

at the top to mean almost any romantic representation, so, perhaps, the painting is left, as the best art, to individual interpretation.

Conclusion
From 1400 to 1650, a movement called Humanism took over intellectual and social thought. Individual mortal experience became more important than the thoughts of afterlife, and the distinction between this world and the next became vaguer. “Beauty was believed to afford at least some glimpse of a transcendental existence. This goes far to explain the humanist cult of beauty and makes plain that humanism was, above everything else, fundamentally an aesthetic movement. Human experience, man himself, tended to become the practical measure of all things. The ideal life was no longer a monastic escape from society, but a full participation in rich and varied human relationships” (Kreis, 2000.)

Jewelry encompasses this rebirth of science, social relations, and pure beauty and, so, it should not be surprising that, not only would many masters be fascinated with painting jewelry for multiple purposes, but become goldsmiths themselves. George Eliot once said: “these gems have life in them: their colors speak, say what words fail of,” and it seems quite true; there seems to be no limit to what one can learn from the history and portrayal of jewelry.