*The following article is part of a series written in collaboration with the American Gem Society Laboratories. Special thanks to Alethea Inns, C.G., Director of Diamond Grading at AGSL for her technical contributions..

Diamond clarity grading involves assessing how readily visible the inclusions are in a diamond and accounting for an extensive list of potential variables including the size, number, type, location, and relief of its inclusions. At the American Gem Society Laboratories (AGSL), clarity grading begins once color grading is completed. The grading sequence is sometimes altered depending on workflow considerations. For more information please see the article in this series on the basic lab functions and procedures.

The first thing the grader does in assessing clarity is to examine the stone in the face up direction with a 10x loupe. The diamond is then studied under higher magnification with a microscope to identify inclusions that are otherwise difficult to resolve at 10x. Overall clarity determinations are balanced between the diamond’s appearance face up under magnification and to the naked eye. Final grading is always determined at 10x.

AGSL uses a 0-10 grading scale for clarity, but equates the numerical grade on its reports to the industry standard GIA grading scale. (*See addendum for AGSL descriptions and GIA the correlations). Clarity grading at the AGSL is always performed by at least two graders. Disagreement between graders will escalate the review to a senior grader. Large stones are graded by at least three graders.

Human grading of diamond color and clarity is both objective and subjective, and can be accurately described as practiced skills. Clarity grading is the most challenging because of the diversity of potential elements to consider, and because there is no “master set” of test diamonds to grade against, as there is with color grading.

Color and clarity grades are not discrete units. Rather, they are very narrow ranges along a continuum. Therefore, there are some grades that are squarely in the middle and those that are borderline. The easiest grades to assign are those in the middle of a range. For example, a “solid” VS2 will never be considered for a VS1 or SI1. The most difficult grades to assign are those that are “on the fence” between grades. The differences between a borderline grade can be very slight and can go either way in the final determination. The procedures and practices at the lab are designed to minimize variances and achieve consistency.

As mentioned, clarity features come in many forms and are assessed separately and in combination for the following attributes:

Size
One of the basic considerations is the size of the inclusion or inclusions relative to the size of the diamond. This is an important concept in the discussion surrounding “eye clean” diamonds. An inclusion big enough to get a clarity grade of SI1 in a .50ct is normally small enough to be completely eye clean. But if you could magically scale that same stone up to three carats, the inclusion could become large enough to see with the unaided eye.

Location
The location of the clarity feature is important to its visibility. Inclusions that are in the center of the diamond and close to the table tend to be easier to see than those on the perimeter or deeper within the stone. The location of an inclusion within the complex of facets can also determine if it reflects, adding an additional consideration to the clarity grade.

Number
The number of inclusions impacts the clarity grade. Several small inclusions can result in the same clarity grade as that based upon one larger inclusion. Reflections are considered in this assessment.

Relief
Relief refers to how well the feature shows up against the background. A black crystal tends to reveal itself quite readily while a cloud or transparent feather may appear to be hide well within the facets of the diamond.

Type
The type of inclusion is taken into consideration and can have differential impact. For instance, a cloud can be larger in area but not lower the clarity grade as much as a crystal which is smaller but easier to see. Common types of inclusions are feathers, crystals, clouds, needles, and twinning wisps.

Inclusions vs Blemishes
Inclusions are internal features whereas blemishes are superficial. Some blemishes can be a result of wear such as scratches, chips, and bruises. On AGSL reports as well as GIA reports, external characteristics are plotted in green and inclusions in red.

Durability
Durability is taken into consideration on the lower clarity grades. If a clarity feature has the potential for damage, the grader considers lowering the clarity grade further. It is an appropriate way to communicate the nature of the diamond.

Reflections
Often an inclusion will reflect as the facets act as tiny mirrors. Depending on location and viewing angle, a single crystal may appear multiple times. This will result in a lower clarity grade than if the same inclusion did not reflect. Inclusions very often reflect multiple times when viewed table-down. It is important to remember that he clarity grading call is made from the table-up view.

Shape/facet arrangement
Certain cutting styles are more revealing of clarity features. Emerald cuts for instance provide very little cover for inclusions to hide amongst. Equivalent inclusions in a round or princess cut with more and smaller facets can result in higher clarity grade.

A stone plot on a diamond grading report is a bit like a fingerprint. It records the significant internal and external characteristics of the diamond as a way to help positively identify that diamond.

Not every internal or external feature is necessarily included on the stone plot. There is a complex protocol that determines which clarity features are plotted/not plotted, or mentioned as a comment on the report. Plotting is dependent upon the overall clarity of the diamond and the nature of the inclusions. The purpose of AGSL plotting guidelines is to (a) identify the stone, and to (b) support the clarity grade. Other labs may have slightly different plotting guidelines and policies, but for the most part plotting practices are consistent among the major labs.

Traditionally plotting in the lab was done by freehand sketching on paper. Today there are some computer programs that assist with creating the plot while at the same time putting it into digital form. Using the AGSL proprietary software the grader can rotate the diagram 360 degrees and draw freehand the inclusions exactly as he or she sees them. They can be repositioned, deleted, morphed and scaled as needed until the plot represents the diamond exactly as it is.

The diagram used as a backdrop of the plot should closely resemble the actual facet arrangement of the subject diamond. The grader has many different diagrams to choose from including the most common shapes and facet arrangements seen in the market. For example, there will be separate diagrams for princess cuts with 2, 3, or 4 chevron pavilions. 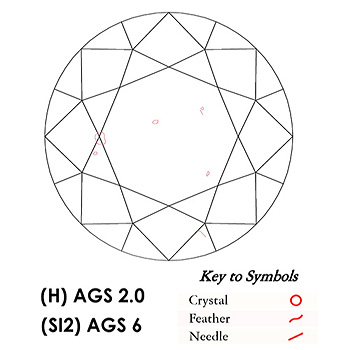 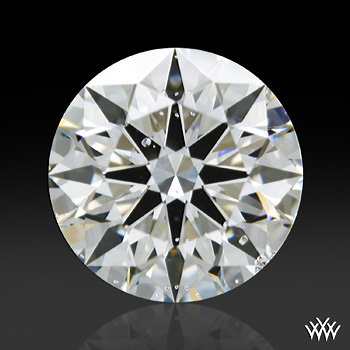 Understanding the relationship between table and pavilion view diagrams:

The orientation of table and pavilion diagrams is a bit counter intuitive. It is NOT a case of “lifting up” the crown and sliding it over the pavilion. Instead it is like folding the page along the line that separates the two diagrams in the image below. Doing that, the reference numbers indicated on the outside of the diagrams will line up. Therefore the feather plotted at the girdle in the top of the crown view near #1, is plotted on the pavilion view (where it breaks the surface) at the corresponding #1 at the bottom of the pavilion diagram. 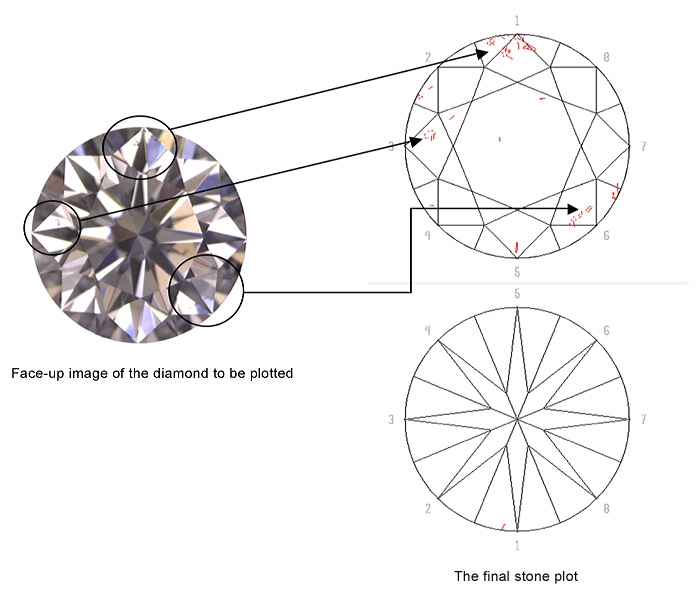 Clarity grading is a practiced skill. Graders are typically trained for 3 months before being put into provisionary production. They are watched carefully for another 3 months before they are considered preliminary graders or “prelims”. At AGSL skills assessment is done on a case-by-case basis. On average it takes a grader about a year to become proficient and an additional year to really develop the necessary speed and confidence. Very gifted graders can develop their ability in a year or less, and are usually promoted to “double” fairly quickly. It is also true that some graders never fully develop for one reason or another.

The Philosophy of Grading

The starting point for any grading lab is their foundational principles and goals. Procedures and quality controls are developed to ensure those goals are being met. AGSL is rooted in the ideals of the American Gem Society with a focus on consistency, comparability, repeatability, and reliability. Maintaining those standards requires a constant process of achieving grading consensus between graders and with the industry as a whole.

Clarity grading is much more involved than many people think. Grading is subject to a lot of factors, including the human factor. Graders not only have to gain the experience to represent the stone accurately on paper, but also have to build an internal memory bank of clarities that they use to make their calls relative to past calls. They also have to contend with shifts in grading as industry standards change. Finally, emotional, psychological, physiological factors also play a role in how a grader grades. Beyond the individual grader, it is necessary to constantly monitor internal quality controls and insure that graders are agreeing with one another. Finally, the lab must be vigilant in staying in synch with industry standards and to ensure that grading is relevant, fair, and consistent.

In keeping with their 0 to 10 scale (where 0 indicates “Ideal” or “zero deductions”) AGSL lists clarity grades numerically on reports while also indicating the corresponding GIA nomenclature.

It is instructive to see the official AGS descriptions of the grades in the scale (below). In addition to helping to understand the basis of the grader’s mindset, seeing how the words are parsed gives insight into the somewhat subjective nature of clarity grading. *It should be noted that the written descriptions of the GIA grades are extremely similar and have evolved over the years.

(The following is taken from current AGS gemology program literature.)

2 and 4 – Minor inclusions that are somewhat difficult (3) or somewhat easy (4) for a trained grader to see under 10x magnification.
Equates to GIA grades VS1 and VS2

5 and 6 – Noticeable inclusions that are easy (5) or very easy (6) for a trained grader to see under 10x magnification. Inclusions in these grade sometimes can be seen with the unaided eye, buth they have little or no effect on the diamond’s beauty.
Equates to GIA grades Si1 and Si2

7 to 10 Inclusions in these grades go from quite visible under 10x magnification and often visible to the unaided eye (7) to very obvious to the unaided eye (10). In grade 8 the inclusions may have an effect on the diamond’s durability, and in grade 10 they pose a definite threat.
Equates to GIA grades I1, I2 and I3

Note: 0 Flawless is a grade reserved for diamonds without any internal inclusions or external blemishes. There are a few very specific exceptions to this rule that are published in the AGSL grading literature.

Every diamond is unique, but some are a little more unique than others. How about an inclusion which is reflected and appears to be two fish swimming together! 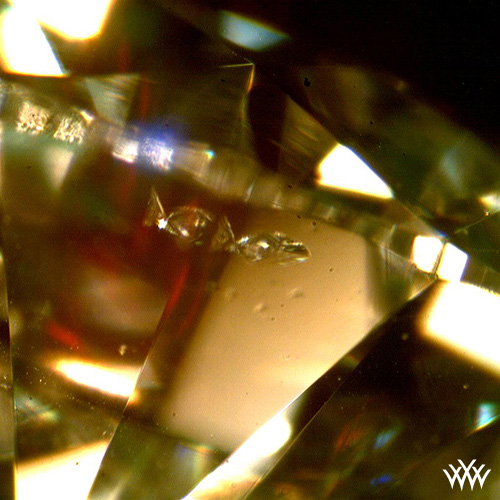 Read the other installments of this series:

Part One: Laboratory Graded Diamonds – What are the benefits for the consumer?