One consumer’s journey to the trade

This is the story of my journey to becoming a Diamond Designer.

Looking back over the years what stands out is not so much events, but the people. The journey starts in Nov. 2003, when I joined Pricescope after lurking for a week or so. I had decided that I wanted to learn more about diamonds while looking for a future upgrade engagement ring for my fiance; Wifey2b. Pricescope was where I found the best tools and resources during my quest. There was a vast amount of knowledge from the experts and consumer’s and the tools Pricescope provided were invaluable to us consumers to use in order to learn about diamonds. Soon after joining, people started looking to me for help in deciding which diamond to buy. I was excited to help my fellow consumers and pay the help forward. I sharpened my diamond knowledge since I felt this responsibility to my fellow consumers and friends, and with the help of some good friends and forum experts, I was successful in doing so.
Special thanks to:

Jonathan Weingarten
John Pollard
Garry Holloway
Sergey Sivovolenko
Dave Atlas
Richard Sherwood
RockDoc, You are missed.
Leonid and Irina
Brian Gavin
Todd Gray
Paul Slegers
Marty Haske
And anyone else I may have forgotten to mention.
More recently, DiaGem (Yoram F.) who has become a strong influence in my knowledge and passion for step cuts.

During my journey in the beginning I had to earn the respect of the experts. I accomplished this over time with my passion for diamonds and new gained diamond knowledge thanks to Pricescope. The early years were fun times on Pricescope, as there were many spirited debates and now these debates are (mostly) settled issues on the subject of round diamond performance. The debates of today are much less intense. Pricescope has matured as a forum since those days.

In the early days I read and soaked in every post on Pricescope, and it only took a few hours a day to read through the threads since the forum was smaller. That would be an impossible task today as the forum has successfully grown so much. Pricescope has really come a long way. Along the way, it has shed the “Wild West” atmosphere (which I do sometimes miss). For my part, I am less of a gunslinger now than in the old days. Some of this is because I do not have a chip on my shoulder anymore; I know I can hold my own and now get the respect I worked very hard to earn.

I do miss the late night discussion and education sessions with friends that were common in those days. We would chat and debate online, often into the late night until everyone involved would start typing incoherently. There was a sense of family on Pricescope among the core members and there still is today even though it has grown by leaps and bounds. The increased membership on Pricescope is a good thing! The new members with their gained knowledge spreads and people pay it forward to other new members which is fantastic to see. I often find myself reading more for enjoyment than looking for threads in which to help, as they are often already well covered. The amount of knowledge and raw talent among the pro-sumers on Pricescope these days is mind-boggling. People looking for help could not be in better hands. That is a large part of why I feel safe moving up into the trade: I would not do so if I felt that the forum was not well covered. Pricescope has been like a second home to me for many years and it is very important to me.

One highlight was when Leonid carried my challenge on the diamond grading to the labs in his JCK presentation on June 2, 2005. “Who does this guy think he is?” was one of the responses from someone high up in the industry. Others agreed that a more open diamond industry was needed and, indeed, the industry was moving in that direction in some areas. It’s a process that continues to this day.

Another highlight is Pricescope’s open Journal articles. Something I love doing is journal articles. This allowed me to share what I had learned and was learning. The support I got from both consumers and trade members was huge!

Garry and Sergey generously issued me a copy of DiamCalc through Pricescope so I could better help consumers and take my education to the next level. I am very grateful for that. Over time I had become fascinated with step cuts and, in particular, asschers; from both pictures online and seeing a large collection of antique asschers in person. I started studying them around 2004. By Jan 2005 I had been helping people select them for a while. It was natural that I start designing them! One day Val showed a picture of a high crowned asscher and said “top this.” I did and called it the monster asscher. It was then that the monster series of diamond designs was born. The monster asscher is the design that the “Volcano” is based on. DiaGem shocked the world in Feb. 2008 by working with me on the forum (unknown to me) and turning my monster into a cuttable design. My diamond was born!
Thread: https://www.pricescope.com/community/threads/why-cut-asschers-with-small-corners-and-windmills.78433/
I learned a lot of valuable lessons from that experience that helped me get to the higher level I am at today. 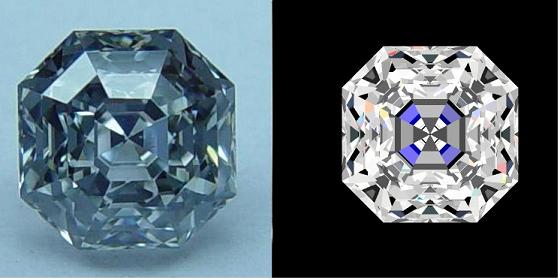 I was shocked and speechless. My reply on seeing it was: “No way? You didn’t? WOW! Can I get more pictures???????” We made history that day and little did I know where it would lead. 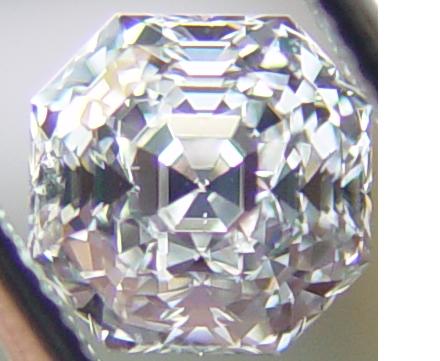 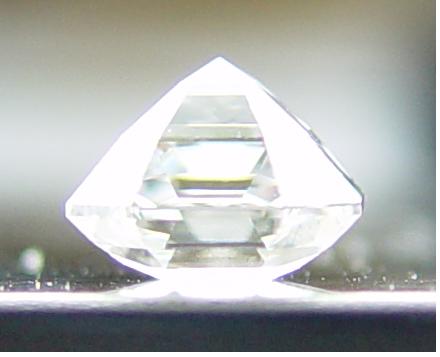 The first time I saw this picture I said “it looks like a volcano!” and my passion became a reality. 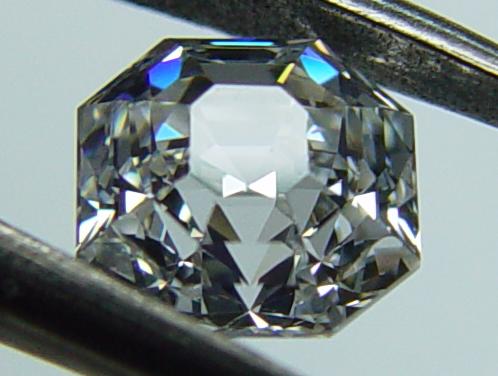 Ever since then it had been in my mind that “volcano” is the right name for it! Getting ahead of the story a little: Well, as fate would have it, the wonderful consumers of Pricescope decided they were going to suggest names for it. I was honored of course. How fitting for a diamond born on the forum to be helped to find a name. The decision was reached to name it “OctaviaTM” “One of the most prominent women in Roman history, Octavia was respected and admired by contemporaries for her loyalty, nobility and humanity, and for maintaining traditional Roman feminine virtues.” A huge thank you to sarap333.
Thread: https://www.pricescope.com/community/threads/storms-new-asscher-names.125991/

The forum also changed how the production “OctaviaTM” would be cut compared to the prototype. In this thread https://www.pricescope.com/community/threads/which-shape-do-you-like-the-most.94588/ there was a preference for slightly smaller corners so when I designed the production “OctaviaTM” I took that into account and adjusted the corners. They are still considered very large but the shape is just slightly more squared now. Do not worry…I would never compromise performance and the improved design is even brighter than the original! We fixed the marginal p3 angles and tuned the design for even greater brightness. DiaGem did his usual awesome job and the results are below. 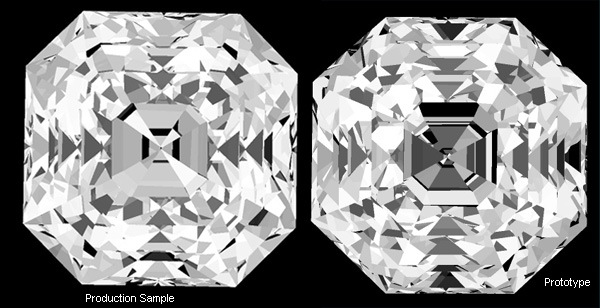 note: These are DiamCalc-generated images for both diamond based on Sarin scans, so some variation is present.

Back to our story. So, the diamond is cut…now what? I made Diagem promise that if he ever had to sell it I would be given the chance to raise the money to buy it myself. It has always been in the back of my mind that someday I would own it – then one day it worked out and that is exactly what happened!!! With an incredibly generous offer from DiaGem it was mine – “Thank you!” In order to get it into the US legally we had to go through a dealer. Since DiaGem works with Jon of Good Old Gold it was natural that he be the one to receive it and forward it to me. When Jon saw it he wanted to sell my design to the consumers. In order to do so I would have to join the Diamond Trade. This is a step I had put off for many years because I liked the freedom I had as a pro-sumer on Pricescope. In many ways I had been moving in that direction anyway; stepping up my posting to the next level and mellowing into it. The timing and the situation was right for me to do so and the forum is in good hands with the pro-sumers who are there now.

One unusual thing about it is the depth is over 75%. This is explained by the 24+% crown height, small table and the proper angles to give it superior light return. The spread of the diamond (L*W per ct) is the same or better than most common asscher cuts with depths in the mid to high 60s. When creating my own designs, performance and the look I want comes first and numbers are a distant third. Diagem shares this philosophy, which is one reason we make a great team. He has been fighting for it a long time, and has encouraged me to peruse my designs and let the marketing take care of itself. When people see the results, they will look past the numbers at the diamond itself.

Other than the shock of seeing it on the report, it is not an issue. This will be further explained in a tutorial at a later date. What really matters is: I am sitting here looking at it, the only lighting is a 14W cfl 8 feet away and my computer monitor and the diamond is throwing off fire. I just cannot get enough of seeing that. :}

Start of a new story: This is the end of one journey and the start of another as I step up to being a member of the diamond trade. My hope is that I continue to help people and put a smile on their faces, as that is what I love most!

The good in bad times in my life: It is no secret that I’ve had serious health issues – I have shared this over my time on Pricescope – as has my wifey2b (my fiance). The outpouring of Love and support from both the trade and consumers for both of us has been huge. Wifey2b and I really appreciate it!!!! The greatest highlight of my time on PS – even higher than having my design cut – is the support of the whole forum and the friendships I have forged here. This story would not be complete without mentioning that.

Addition link to journal article from my journey:

Performance and the p3 facets, a discussion about step cut diamonds. https://www.pricescope.com/journal/performance-and-p3-facets-discussion-about-step-cut-diamonds

A huge thanks to:
Andrey for asking me to do this article.
Skippy and John Pollard for help with editing it.